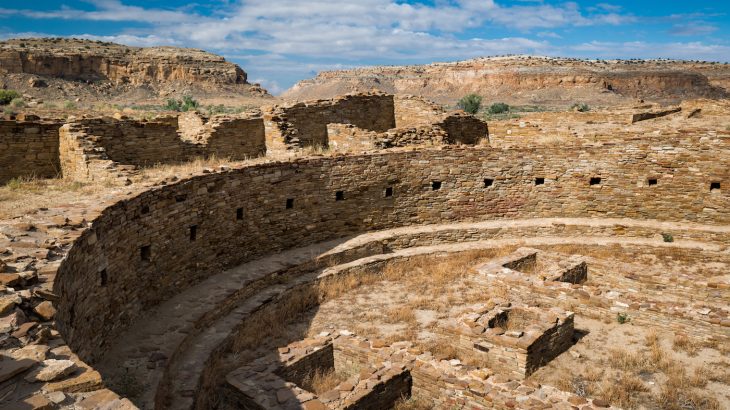 The beauty and significance of Chaco Culture National Historical Park

As you turn off the highway towards the long, remote road trip through ranches and deserts leading to Chaco Culture National Historical Park in northwestern New Mexico, you’ll likely encounter a roadside stand selling Navajo tacos and fry bread.  The local native food is just a small hint that the native peoples who’ve lived in the desert southwest haven’t vanished from the landscape as the centuries old ruins crumbling into the earth might suggest.

An hour-long drive along an increasingly rough road from Highway 550 leads at last to a small stretch of asphalt that represents the domain of the National Park Service at Chaco Canyon.  The turn from Highway 550 towards the park is itself nothing monumental, just a juncture of two relatively small roads in the desert marked by a lonely Sinclair gas station. The Sinclair station barely functioned at all when we visited, only one pump of four being operational and the prices set for tourists desperate for a fill up.  Nothing about the place suggests the cultural grandeur hidden in Chaco.

In his book, House of Rain: Tracking a Vanished Civilization Across the American Southwest, Craig Child’s describes the hostility of Chaco:

“Ochre- and straw-colored washes loop in and out for hundreds of miles, many seeing running water for no more than a day or two each year.  In some places dusty sagebrush steppes extend as far as the eye can see, and in others scabs of badlands lie naked under the sun, completely devoid of vegetation.”

Cactus, yucca and salt brush dot hillsides, the road crosses dry, red dirt ravines that represent the presence of unpredictable flood waters at times.  Barbed wire fences and grazing livestock- horses and cows represent the sparse ranching community of the area. Other people once passed through this desert, walking very different roads towards what was a cultural center.

According to the National Park Service, the cultural highpoint of the Chacoan people started around the mid-800s AD and lasted more than 300 years.  During this time impressive buildings were constructed and dry agriculture developed in a place hard to imagine survival without modern technology.  The buildings and people of Chaco Canyon are a bit mysterious but they also represent a continuum from the distant past that stretches to the present moment.  Most archaeologists believe that the purpose of Chaco’s largest buildings were for ceremony and trade more than habitation. Called great houses, ruins like Pueblo Bonito and Una Vida were built in a landscape of sacred mountains and often aligned with careful astronomical observations.

Pueblo Bonito is one of the most important great houses in Chaco and also the most accessible.  Built around 850 AD to 1150 AD, Pueblo Bonito contains more than 350 ground level rooms and reaches three stories in places, according to Chaco Research Archive.  The whole structure of Pueblo Bonito is roughly shaped like the letter D and nestled close to the cliffs of the canyon wall. 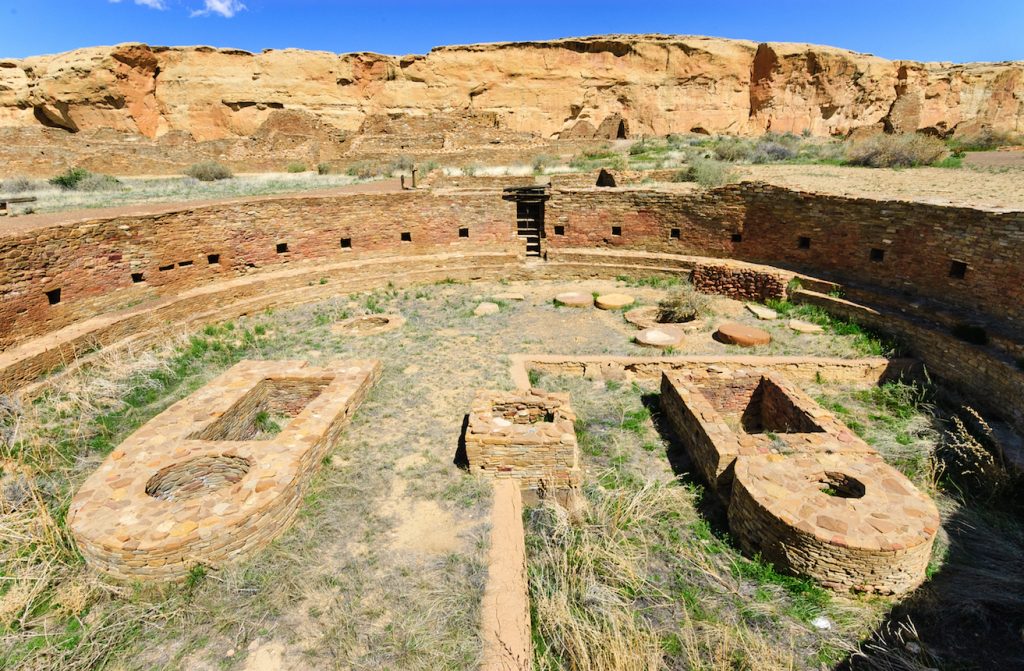 The impressive nature of the great houses is hard to convey by words.  The walls of Pueblo Bonito and the other ruins in Chaco are made of gritty, tan, native stone but the lintels of doors and windows are made of wood, often amazingly intact.  In other places the decaying stumps of beams that once supported roofs and floors can be seen still set into stone walls. The wood in Chaco took enormous amounts of labor as seems apparent from the demanding desert environment of the place.

According to University of Arizona News, structures in Chaco used more than 200,000 trees to build.  The trees, Ponderosa Pine, Douglas fir and other trees native to the southwest, haven’t grown in Chaco Canyon itself for more than 10,000 years.

The trees used in Chaco Canyon are a testament to the coordination of labor and the well-engineered systems of roads built in the area.  The logs might have weighed as much as 600 pounds and measured around 15 feet long, and were carried by hand more than fifty miles. The wood came from Chuska and San Mateo Mountains where the trees were felled, and prepared, allowed to dry before being carried to save on weight.  When you start considering the amount of hard work that the structures at Chaco represent, it’s difficult not to be impressed.

The great houses at Chaco represent a connection between peoples of different cultures and indeed a connection to other parts of the continent.  Within the shadows of a room buried in one of the great houses, archaeologists found the most highly decorated burial in the southwest. Two skeletons lying on a bed of fifty six thousand pieces of turquoise were covered in a sheet made of shells imported from the Pacific coast.  Macaws were kept captive in Chaco, their skeletons found deformed by never being allowed sunlight, these birds’ feathers were used to create elaborate adornments.

Remains of drinking chocolate in ceramic vessels show more evidence of trade routes converging on Chaco.  Despite being far removed from greater population centers of the Aztec, Maya or Inca in the Americas, the Chacoan people were connected to much of the rest of the new world.  In the context of the demanding environment of the American Southwest, Chaco Canyon was a hub of ceremony, trade and advanced civilization.

Physiological evidence shows that the people who came to Chaco were of different races, representing different languages.  These people came for trade or important ceremonies. Despite the large scale of buildings at Chaco, archaeologists estimate that only a few hundred to a couple thousand people lived at Chaco year-round.  The buildings it seems were constructed in part for temporary visitors: pilgrims or traders. Wandering through the stunning structures of Chaco set against the equally impressive starkness of the desert more questions come to mind than the Park Service’s pamphlets and signs can easily answer.

Once the people at Chaco were commonly called the Anasazi, a term from Navajo which can be translated as ‘ancient enemy’ or ‘ancient people’.  The term is misleading though; it suggests that these people are one of antiquity, perhaps a people only remembered by the Navajo.

Today throughout Chaco, the people are instead referred to as ‘Ancestral Pueblo’ or simple ‘Chacoan people’, less contentious terms.  Indeed the people who descended from Chaco still live in the area. Modern Puebloans are the Hopi, Zuni and many other tribes that are related to the people who once lived in Chaco.  Structures like the Kivas found in Chaco are still built for use in ceremonies by these people today. The video in the visitor’s center at Chaco Culture National Historical Park features many Native Americans, including Hopi, Zuni and Navajo who also left petroglyphs in the area.

It’s easy to find statistics on how much visitors spend, how many jobs are supported by tourism at National Parks and related data, it’s harder to find solid numbers on the ethnic composition of visitors.  As I walk through the park, it becomes increasingly obvious that it’s an anomaly in the region. In surrounding towns, the presence of Native Americans is obvious. In Chaco, you could be in almost any national park in the United States; the visitors were mostly white and mostly older.  This simple observation made me a little uncomfortable at my own place in Chaco and crystalized into more questions as I perused the artifacts on display in the visitor’s center.

Many of the display cases were empty of artifacts.  Instead of pottery or tools or jewelry, the empty glass cases featured a printed sign from the National Park Service.  The sign simply said that the park didn’t have adequately climate controlled display cases to house the artifacts from Chaco itself.  Some of the artifacts were in New York, some in other places on displays at other museums. Native traditions from many tribes maintain the importance of Chaco, not considering it abandoned at all, the National Park displays tell me.  I wonder what Native Americans might think of these empty display cases, I wonder what they would think of the artifacts housed in display cases at all. The visitor center also shows a large blown-up photograph of archaeologists at Chaco Culture National Historical Park, seemingly no Native Americans among them.

In 2017, Scientific American published a story on new research on remains found in Pueblo Bonito.  DNA was analyzed from human bones found and it was found that leaders in the Chaco Canyon region or at least Pueblo Bonito descended from a maternal line.  Mothers ceded their place as leaders to daughters. This is a stunning piece of information yet ethics overshadows it.

The researchers didn’t consult Native Americans before desecrating the bones of their ancestors for science.  Actually, the human remains from Chaco mostly are housed in New York’s American Museum of Natural History, without permission from native groups.  Considering the relationship between European-American culture and Native culture as well as the history of the US federal government and native groups, I am saddened.  The more I consider Chaco Canyon; I wonder if it’s the place of my culture and indeed my federal government to tell the story of the Chacoan people at all. I am grateful the place exists but I wonder if it’s a place that is shared or stolen.