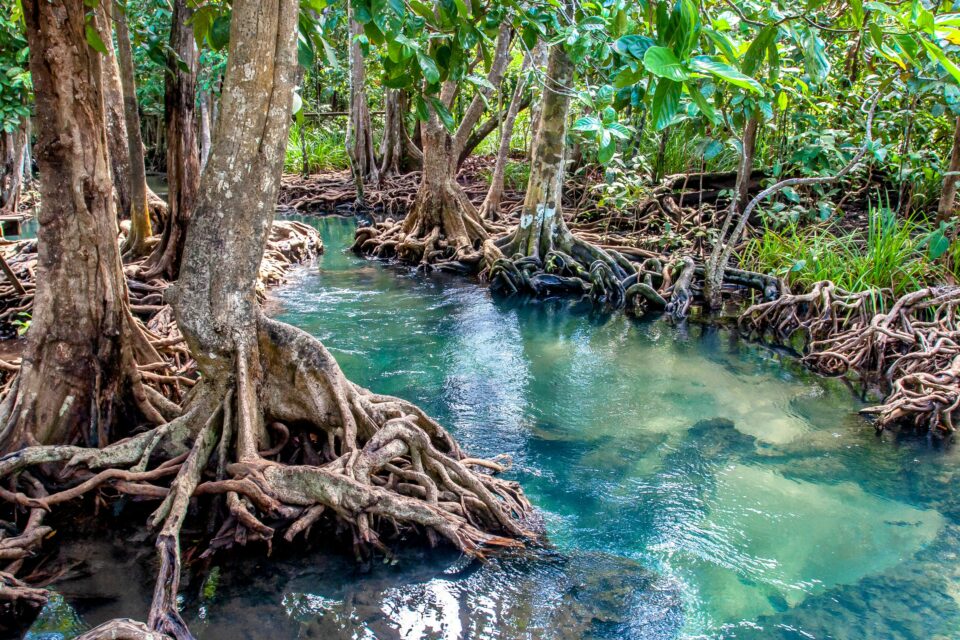 Experiencing a mangrove forest can be like walking (or kayaking) through a dream. These forests are magical places. They provide habitat and protection for many species, including humans. However, we have not returned the favor. They are threatened by deforestation, pollution, and climate change.

A study published in the journal Nature Climate Change gives us another reason to worry about mangroves: ocean density. The research predicts changes in seawater density due to climate change will affect propagule dispersal. Propagules are a particular type of seed germinating while still on the tree. These propagules travel the ocean until they find a good place to put down roots.

“Climate change affects sea-surface density via changes in temperature and salinity. Since propagules of widely distributed mangroves species have densities near that of seawater, changes in ocean density hold implications for oceanic dispersal of mangroves. Whether mangrove propagules float or sink depends on the difference between the densities of the propagules and that of the surrounding water,” explained Tom Van der Stocken of Vrije Universiteit Brussel

“It is expected that warming winter temperatures and sea level rise will impact the distribution of these carbon-rich forests, but changes in surface-ocean properties might also influence distributional patterns through dispersal.”

Focusing on data from the Bio-ORACLE database, the researchers used the UNESCO EOS-80 equation of state polynomial for seawater to estimate future sea-surface densities.

“Our study provides evidence that the density of surface-ocean waters along mangrove forests will decrease by the end of the 21st century, and a factor of two larger in the Indo-West Pacific region than in the Atlantic East Pacific,” said study co-author Nico Koedam.

The researchers acknowledge that their projections are tentative and hope their study will inspire more research.

“There is still uncertainty on exactly how the projected changes in seawater density will impact realized mangrove dispersal in different parts of the world and more research is needed regarding the biological response of mangroves to climate-driven changes in surface-water properties,” said Van der Stocken.

“In this study, we took advantage of marine data layers to fill this gap, and we hope that our study will help to inspire new research that will quantify the effects of changes in the properties of the ocean surface on propagule floating periods, dispersal, and connectivity.”