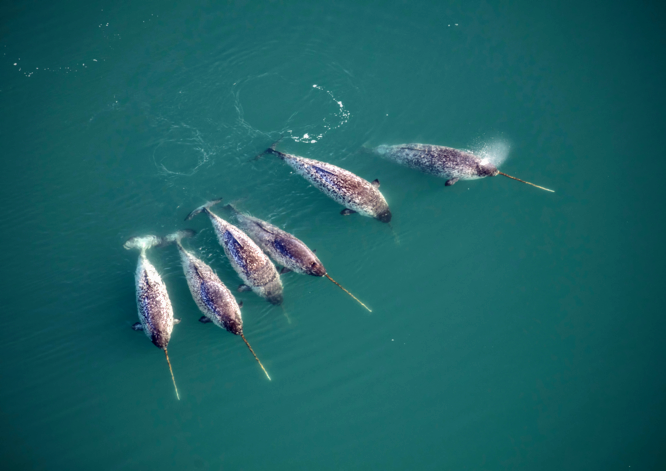 Narwhals (Monodon monoceros) are a type of small whale that inhabit the Arctic Ocean. Also known as the unicorns of the sea, narwhals are mysterious creatures. However, researchers with Hokkaido University and Greenland Institute of Natural Resources have begun to uncover some of their secrets.

The experts analyzed 83 days’ worth of data from a satellite-tagged animal to study the whale’s daily diving behaviors. Prior to this study, scientists believed that narwhal diving and surface resting behavior was irregular.

“While animal-borne ocean sensors continue to advance and collect more data, there is a lack of adequate methods to analyze records of irregular behavior,” said study first author Evgeny A. Podolskiy.

However, this idea was abandoned when a new method of analysis was used. The researchers applied mathematical equations of the chaos theory to the movements and patterns that were previously difficult to detect.

“Our approach is relatively simple to implement and can map and label long term data, identifying differences between the behavior of individual animals and different species, and also detecting perturbations in behavior caused by changing influences,” explained the study authors.

The researchers found that the tagged whale would rest close to the ocean surface mid-day, but when they did dive during that period, the dives were very deep. At dusk, the narwhal would take shallower dives, but these dives were more intense, perhaps due to hunting squid. The experts also noticed that more sea ice restrictions seemed to compel more extreme diving.

The narwhal is a charismatic species but also one of the most vulnerable to our changing climate since it depends on sea ice. As the ice melts, they become more exposed to the open ocean. Consequently, there is increased conflict with humans via hunting and oil extraction. Also, the opening of sea ice allows the natural migration of predators such as orcas deeper into the arctic.

The authors hope this study will encourage other scientists to use the methods developed in this research to assist in narwhal preservation. The chaos theory could also be applied to other endangered animals in the Arctic.

The study appears in the journal PLOS Computational Biology.