Chinese pterodactyl remains found far away in the UK • Earth.com 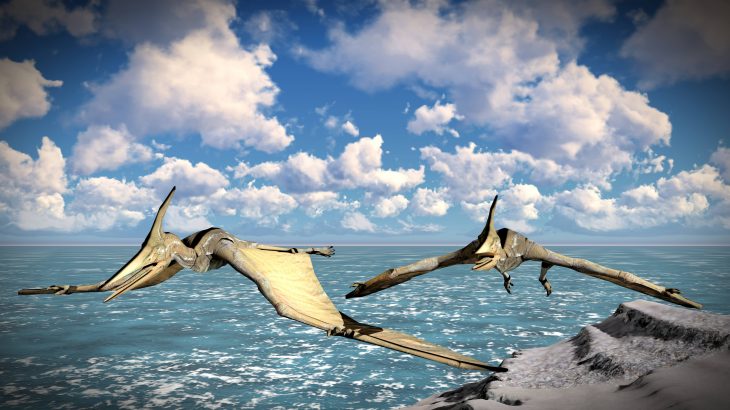 The fossilized remains of a Chinese pterodactyl have been found thousands of miles away in the United Kingdom, according to a new study from the University of Portsmouth.

The specimen belonged to an unusual group of pterodactyls known as tapejarids, and evidence of these flying reptiles has never before been found in the UK.

A fossil hunter was walking his dog at Sandown Bay on the Isle of Wight when he stumbled upon an unusual bone fragment. He turned it over to paleontologists for examination.

Megan Jacobs, a student of Paleontology at Portsmouth, speculated that the fossil was a jaw bone from a pterodactyl.

Upon further analysis, the experts determined that the fossil was, in fact, part of a pterodactyl jaw.

However, the team was surprised to find that this particular pterodactyl was a tapejarid pterosaur, a flying reptile that once existed in modern-day China and Brazil.

The jaw bone lacked teeth and strongly resembled a specimen that the Portsmouth team discovered in Morocco last year, which turned out to be a tapejarid pterosaur species that is now named Afrotapejara zouhri.

“Although only a fragment of jaw, it has all the characteristics of a tapejarid jaw, including numerous tiny little holes that held minute sensory organs for detecting their food, and a downturned, finely pointed beak,” said Jacobs.

“Complete examples from Brazil and China show that they had large head crests, with the crest sometimes being twice as big as the skull. The crests were probably used in sexual display and may have been brightly colored.”

The researchers determined that the new pterodactyl specimen, Wightia declivirostris, is more closely related to Chinese tapejarids than to those that have been uncovered in Brazil.

“This new species adds to the diversity of dinosaurs and other prehistoric reptiles found on the Island, which is now one of the most important places for Cretaceous dinosaurs in the world,” said study co-author Professor David Martill.

The hunter who discovered the fossil donated it to the Dinosaur Isle Museum at Sandown, where it may be displayed in the future.