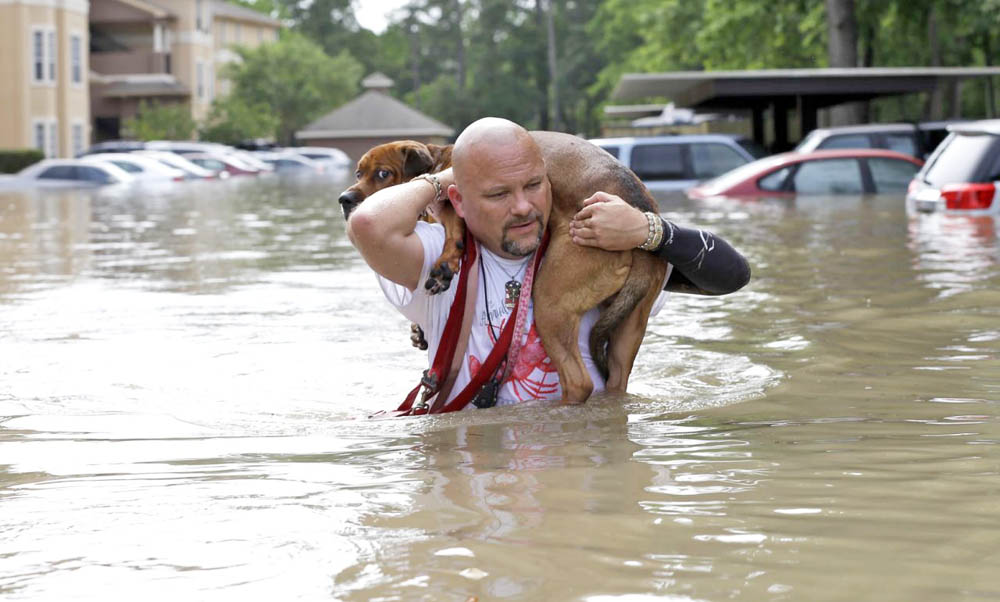 With clay soil and tabletop-flat terrain, Houston has endured flooding for generations. Its 1,700 miles of man-made channels struggle to dispatch storm runoff to the Gulf of Mexico.

Extreme downpours have doubled in frequency over the past three decades, climatologists say, in part because of global warming. The other main culprit is unrestrained development in the only major U.S. city without zoning rules. That combination means more pavement and deeper floodwaters. Critics blame cozy relations between developers and local leaders for inadequate flood-protection measures.

An Associated Press analysis of government data found that if Harris County, which includes Houston, were a state it would rank in the top five or six in every category of repeat federal flood losses – defined as any property with two or more losses in a 10-year-period amounting to at least $1,000 each.

Since 1998, the Federal Emergency Management Agency has paid more than $3 billion in today’s dollars for flood losses in metropolitan Houston.

While repeat federal flood relief payouts average about $3,000 per square mile nationally, they are nearly half a million dollars per square mile in metro Houston. Six of Texas’ eight federally declared disasters since December 2013 included floods.

“Houston has always had a flood problem, and the growth in the paving has only made it worse,” FEMA Director Craig Fugate said. When the best building and land-use practices aren’t followed, “we see the costs of disasters go up.”

Metro Houston, which includes smaller communities and unincorporated parts of Harris County, has added more than a million people since 1992, while the amount of water-absorbing wetlands per capita has been halved. Paved surfaces in the county increased by well over 25 percent in that period, according to researchers.

Since the 1980s, Houston’s preferred approach to flood control, besides improving drainage, has been to build thousands of detention ponds, concrete-lined pools that capture stormwater and pipe it out slowly.

But developers don’t build enough floodwater retention into their projects, and “areas that never flooded before now flood in the smallest event,” said Ed Browne, chairmen of the citizens’ group Residents Against Flooding .

For example, if a property previously had construction and is being redeveloped, building codes don’t require detention ponds.

“That’s just not how the laws are set up,” said Mike Talbott, executive director of theHarris County Flood Control District.

He said blaming new construction for worsening flooding is unwarranted.

“The new growth is mitigating its own impacts,” he said.

That’s especially true in places such as Frostwood, a west Houston neighborhood downhill from Memorial City, a development with big-box stores, office towers, a hospital, a hotel and condos.

Memorial City’s owner, Metro National, has benefited from more than a decade of infrastructure improvements made by a quasi-governmental authority that the company’s own lawyers helped create.

Flooded residents claim the authority failed to honor a 2003 pledge to build stormwater detention ponds on their side of Interstate 10, which the state Department of Transportation subsequently expanded to 26 lanes including frontage.

“It seems like we’ve just got a concrete jungle around us now with no place for the water to go,” said Carolyn Elliott, an 81-year-old widow whose husband was critically ill when an April 2009 deluge forced them from their home of three decades.

Jim Jard, a former Metro National president who sat on the Houston Planning Commission for 25 years and is still involved with the company, said “there is no civil engineer that will tell you projects at Metro National caused additional flooding.”

Nearly half of the $313,000 that Harris County’s top elected official, Commissioner Ed Emmett, collected in campaign contributions in the first half of 2014 came from engineers, builders, developers and real estate interests. Emmett said it’s unfair to say the donations gave them outsized influence. So why do they give?

“Why does anyone give money to campaigns? You’d have to ask them,” said Emmett, a Republican re-elected in November 2014.

More than a quarter of the $726,000 in contributions to Houston Mayor Sylvester Turner last December came from developers, engineers, builders and real estate interests. Some of the money for Turner, a Democrat who won a Dec. 12 runoff, was collected at a Metro National fundraiser. Turner’s spokeswoman, Janice Evans, said project choices in the “Rebuild Houston” program for improving drainage are based on need and data, “not influence from any one group.”

Freshman city council member Greg Travis said Metro National backed his opponent during last year’s race. After Travis won, he said, the company gave him six or seven personal checks, including one from Jard. He said he never cashed the checks and didn’t recall the amounts.

“I am not opposed to Metro National,” Travis said. “I like a lot of what they do. But there are certain things I don’t like. And the fact is, I don’t need their money.”

Climate change is increasingly concentrating downpours into smaller areas, with big implications for urban flooding, scientists say. On April 18, one northwest section of Harris County got 4.7 inches in an hour.

Rising average temperatures since 1985 have packed 7 percent more moisture into the atmosphere above Houston, while warmer Gulf of Mexico waters collude in the heavier rains.

Since 1986, extreme downpours – the type measured in double-digit inches – have occurred twice as often as in the previous 30 years, the AP weather analysis showed.

Texas State Climatologist John Nielsen-Gammon said to expect more frequent and bigger downpours. “The odds are twice as high as they have been in the past.”

Since the late 1970s, FEMA has made more flood damage payments in Harris County than in any place outside New Orleans and two other Louisiana parishes also ravaged by Hurricane Katrina. The agency received more than 8,000 claims from last month’s deluge but has yet to calculate how many are repeat victims.

Harris County has done about 3,000 buyouts over the past three decades, underwritten mostly by federal dollars. Talbott said buyouts will remain part of the strategy, though Mark Loethen of Houston’s Public Works Department said the city prefers helping homeowners get federal grants to raise homes above flood levels.

With each new flood, the maps FEMA uses to determine flood insurance eligibility and other matters become instantly obsolete. A 2013 presidential directive told the agency to start using computer modeling to update the maps, but that hasn’t happened yet.

Harris County boasts of being among just seven agencies nationwide that is empowered to independently update flood maps, although FEMA must give final approval. In places such as Denver and North Carolina, that practice has worked well, said Alan Lulloff of the Association of State Flood Plain Managers.

But Houston environmental attorney Jim Blackburn said Harris County’s autonomy emerged out of the pro-developer 1980s. “In some of the more egregious cases, it appeared to us that developers had an undue influence in the shape or extent of the flood plain,” he said.

Blackburn has filed three related lawsuits in the last 15 years. A Sierra Club suit prompted FEMA to raise the flood plain by some 4 feet in a northwestern suburb. Another suit failed to halt construction of a section of Houston’s third outer-ring highway. The Texas Supreme Court is rehearing a 2002 lawsuit filed by homeowners along oft-flooded White Oak Bayou so they might qualify for federal relief.

Parts of Meyerland, a leafy subdivision inaugurated on a former rice field in 1955 by then-Vice President Richard Nixon, are now a forlorn hodgepodge of flood-ravaged, one-story ranch homes, many with “for sale” signs. The neighborhood 10 miles southwest of downtown includes many homes that were rebuilt 5 feet above ground.

Self-employed IT administrator Harry Duffey, 48, was just about to move back in with his wife and four kids when the latest flood hit. A few miles upstream, nearly 8 inches of rain fell in just three hours.

The family bought their 5,100-square-foot home, located just a block from Bray’s Bayou, three years ago for $750,000. Nothing in its records indicated it had ever flooded, Duffey said.

On Memorial Day 2015, the Duffeys were wading in 2.5 feet of fetid water. They had not yet moved back in when the water returned a month ago. Wood floors and drywall were ripped out again.

The graduate of nearby Rice University got a $250,000 flood insurance payout last time. Deeply in debt, he hopes for the same again.

“From a financial standpoint, the only thing that makes sense is to move back, to remodel a third time,” he said.

Follow Borenstein at http://twitter.com/borenbears . His work can be found athttp://bigstory.ap.org/content/seth-borenstein .

Follow Bajak at http://twitter.com/fbajak . His work can be found athttp://bigstory.ap.org/content/frank-bajak .