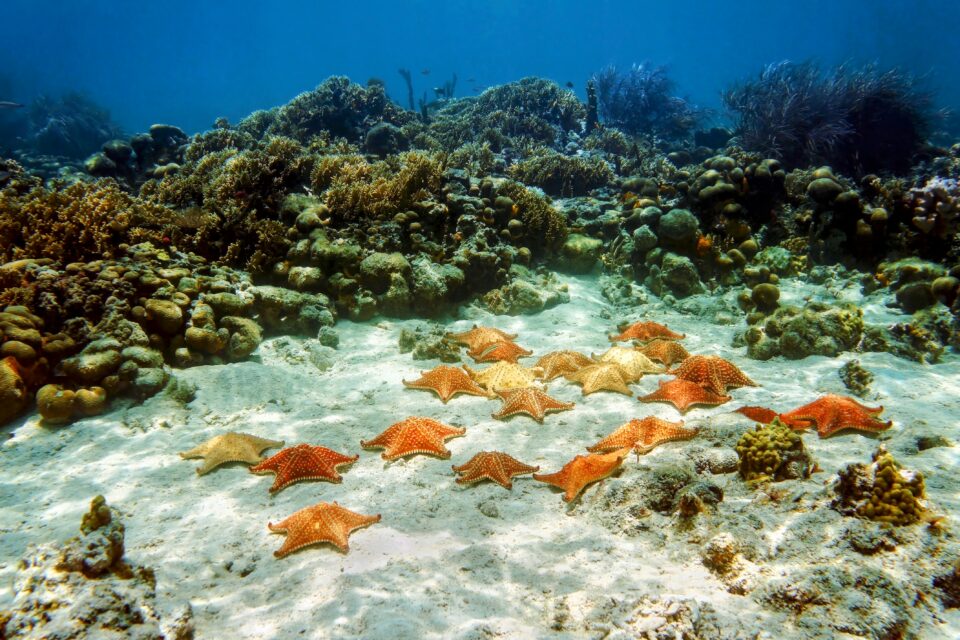 Climate change is anticipated to affect ocean biodiversity and play a major role in future changes in the structure of marine communities. This is because marine species are directly impacted by changes in ocean temperature and acidity, which can alter their abundance, diversity, distribution, feeding patterns, development and breeding. Measurements of biodiversity are thus commonly used in studies that monitor and assess the effects of climate change on marine communities.

However, it is difficult for scientists to predict exactly how changes in ocean acidification and temperature will influence marine communities in future because of the complex nature of marine ecosystems and the inadequacy of laboratory or mesocosm (outdoor laboratory) conditions in replicating this complexity. Previous experimental research has made use of various different methods to assess the potential effects and come up with contradicting results.

In order to improve understanding of climate-driven effects on marine communities, scientists from the University of Adelaide have now reviewed 58 studies on community responses around volcanic CO2 vents in temperate reef, coral reef and seagrass ecosystems. The CO2 that bubbles up from below the ocean floor in these areas acidifies the seawater and this affects the surrounding biological communities. Scientists use these conditions as a proxy to provide insights into what may happen to biological communities in the face of ocean acidification.

The researchers also reviewed the findings of 23 studies conducted in outdoor experimental environments (mesocosms) or laboratories in order to determine whether these conditions can adequately represent the changes that occur in marine communities. Their aim was to test for the prevalence of global and generalized responses in biodiversity and community-level change to the stresses of acidification and warming in both natural and artificial locations. Their results are published in the journal Global Change Biology.

Previous research studies have typically used measures of species diversity to track community changes. This means that they counted the number of different species present, and their abundances, in communities subject to changing environmental conditions. Overall, the University of Adelaide researchers found that this was a poor metric to use as both increases and decreases in species richness were recorded, cancelling out any global trend. Instead, there was a pattern of community replacement, meaning that although some species declined or disappeared from the community, others moved in and became established.

“The belief that climate change will alter global marine biodiversity is one of the most widely accepted,” said Professor Ivan Nagelkerken from the University of Adelaide’s Environment Institute and Southern Seas Ecology Laboratories, who was first author on the study. “Commonly used biodiversity measures don’t pick up reorganization of marine communities due to ocean acidification because new species replace species that are lost. [This means that] little or no biodiversity change is detected when one community of marine species is replaced by another, even under significant habitat loss.”

Instead, the researchers detected globally repeated patterns of species replacements and community ‘reshuffling’ in the studies of CO2 vent communities. In particular, these communities showed decreases in cover by calcareous algae, crustose coralline algae, and filter feeders that have calcified shells or tubes. All these organisms contain calcium carbonate which would dissolve under acidic conditions. In contrast, there was increased cover by fleshy algae, turf algae and biofilm in CO2 vent communities. The authors feel that these measures of community change are more useful than simple determination of species diversity.

Furthermore, outdoor laboratory studies of marine communities were even less sensitive in detecting species replacements, community reshuffling or biodiversity change than natural systems, either to ocean acidification or warming, or to a combination of both. This lower-sensitivity is not unexpected as community structure is often influenced by ecological processes that operate over substantially larger spatial and temporal scales than those tested in outdoor laboratories.

“Experiments done in the laboratory are weak in detecting biodiversity change, so natural systems experiencing advanced ocean acidification are emerging as an innovative way of studying biodiversity responses,” said Professor Sean Connell, co-author and professor in the University of Adelaide’s Environment Institute and Southern Seas Ecology Laboratories. “No ecological study, whether in the laboratory or field, can fully replicate the complex ecological interactions that exist in nature across the time and spatial scales of relevance to climate change.”

The authors conclude that there are detectible, generalizable changes that take place in marine communities in response to environmental changes in acidity and temperature, but that these are not accurately tracked by considering changes in biodiversity alone. Instead, ecologists should monitor species replacements and community reorganization, particularly in terms of important functional groups, if they wish to detect the effects of climate change on marine communities.

“Future projections of ecosystem change and stability will be more meaningful if they focus on detections of species replacements and changes to the abundance of species rather than testing for signs of habitat loss or biodiversity loss per se,” said Professor Nagelkerken.