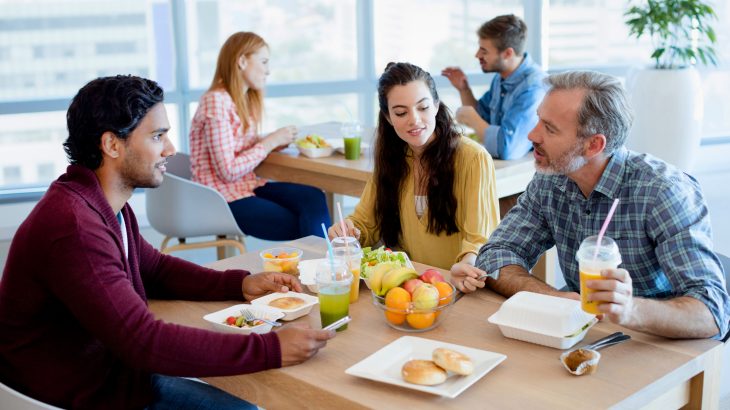 Our social connections have an influence on the food we choose to eat, according to new research. The experts discovered when co-workers are eating together, their food choices are comparably healthy or unhealthy.

“We found that individuals tend to mirror the food choices of others in their social circles, which may explain one way obesity spreads through social networks,” said Dr. Levy.

The experts found that an individual’s eating patterns can be shaped even by a casual acquaintance. This finding supports the results of several previous long-term studies which demonstrated the influence of social ties on weight gain, eating behavior, and alcohol consumption.

The current study was focused on the cumulative social influence of food choices among approximately 6,000 MGH employees as they ate in the hospital’s cafeterias over two years.

Based on the assessments of three million encounters between pairs of employees making cafeteria purchases together, the researchers found that food choices among connected employees were consistently more alike than they were different. “The effect size was a bit stronger for healthy foods than for unhealthy foods,” said Dr. Levy.

One critical objective of the study was to determine whether social networks truly influence eating behavior, or whether people with similar food preferences are more likely to become friends and eat together – a phenomenon known as homophily.

“We controlled for characteristics that people had in common and analyzed the data from numerous perspectives, consistently finding results that supported social influence rather than homophily explanations,” said Dr. Levy.

Peer pressure is one explanation for why people who are socially connected make similar food choices.

“People may change their behavior to cement the relationship with someone in their social circle,” said Dr. Levy. Co-workers may encourage each other to choose unhealthy foods or exert pressure to make a healthier choice.

“As we emerge from the pandemic and transition back to in-person work, we have an opportunity to eat together in a more healthful way than we did before,” said study co-author Mark Pachucki. “If your eating habits shape how your co-workers eat – even just a little – then changing your food choices for the better might benefit your co-workers as well.”