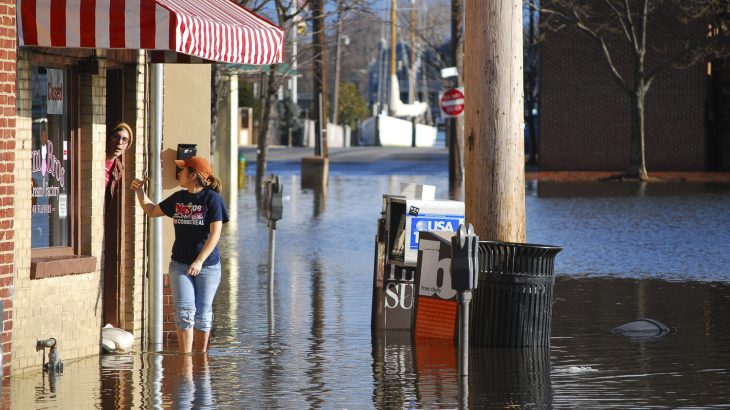 Coastal communities across the United States are already taking a hard hit from climate change, and the local businesses are paying a high price. A study led by Stanford graduate student Miyuki Hino has found that downtown Annapolis had 3,000 fewer visitors in 2017 due to high-tide flooding, which is a loss of between $86,000 and $172,000 in revenue.

“Small businesses in downtown Annapolis rely on visitors. By measuring the extent of the impact of flooding, we can understand the business case – how sea level rise is already impacting businesses’ experiences and profits,” said study co-author Samantha Belanger.

High-tide flooding occurs when ocean waters rise above the levels that the infrastructure was designed to handle. Water from these floods fills the streets and parking lots and prevents normal traffic.

According to the National Oceanic and Atmospheric Administration (NOAA), high-tide flooding days have increased by about 60 percent from 20 years ago.

“As global temperatures and sea levels rise, high-tide flooding becomes more frequent,” said study co-author Miyuki Hino. “For coastal businesses, that means more days when customers might not be able to get to their store. Even though most floods only last for a few hours, their impacts can add up.”

“In Annapolis, as in many places, high-tide flooding is happening right in the heart of things. The historic district is a favorite among locals and tourists alike. It is now frequently flooding,” said study co-author Katharine Mach.

The researchers used parking meters, satellite imagery, interviews, and other data to investigate how potential customers were deterred from visiting a popular business region near the water known as City Dock during times of flooding. They found no evidence that customers were returning after the floods or had braved the water to make it to businesses.

“So often we think of climate change and sea level rise as these huge ideas happening at a global scale, but high-tide flooding is one way to experience these changes in your daily life just trying to get to your restaurant reservation,” said Hino.

“What we’re finding is something many local leaders in coastal cities already know: the waters are rising up and surging into daily life. So are the costs,” said Mach. “Understanding the impacts for people today – at large and small scale – is an essential starting point for making smart adjustments to the risks.”