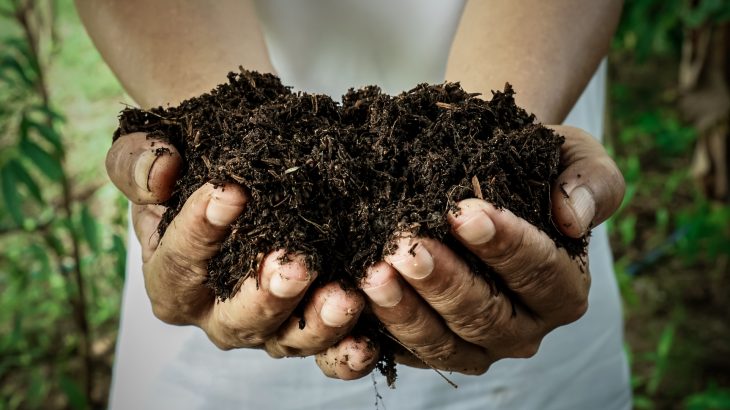 Composting is a simple way to harness natural processes for the use of agriculture. Fungi, bacteria, even insects all work to break down organic materials such as dung, food scraps, or grass clippings to create nutrient rich soil for growing plants.

Composting has been practiced for a very long time and it’s specific origins are lost somewhere in the distant past. According to the University of Illinois Extension office, clay tablets from the Akkadian Empire in Mesopotamia, dating back a thousand years before the biblical prophet Moses, refer to compost. The ancient Romans and Greeks knew about composting. National Geographic reports that there’s archaeological evidence that Scots were using compost as long as 12,000 years ago, planting directly in the compost itself instead of spreading it on a field.

According to Carry on Composting, Cleopatra was reported to have made worms sacred in Egypt after noting their importance in composting, and the famous queen even made it a crime punishable by death to remove worms from Egypt. George Washington instructed his slaves to use compost on his farm.

Beyond the colorful human history of composting, it’s really a natural process utilized by humans with just a bit of tweaking and serves two basic but extremely important purposes – disposing of waste and providing nutrients to important plants (usually in agriculture). Composting is a way to sequester carbon and recycle scraps or other organic ‘trash’ as well. Organic agriculture, especially on small scales, often still relies on composting in one form or another to deliver nutrients to plants. In ancient China, even human waste was used in compost, a practice mostly dismissed by westerners as a health hazard but helped allow the continuous farming of the same soil for as long as 40 centuries. Unfortunately for sustainable agriculture, this practice was largely ended in China, phasing out in the 1980s in favor of more chemical agriculture. Fish and other dead animals or animal parts (in food scraps) have long been a part of careful composting efforts, and so it was only a matter of time before composting of human bodies was considered.

For many, the idea of becoming part of the food chain, or returning to earth after death is an attractive option. In Tibet the practice of ‘sky burial’ where one is fed to vultures has been practiced for a long time by certain Tibetan Buddhists. I previously reported on more natural or ‘eco friendly’ burial options. The option of being composted is a relatively new one with obvious potential health risks that must be dealt with responsibly.

A process similar to composting, called ‘Promession’, is being promoted by Promessa, a company that pioneered the process. Promession is basically freeze-drying human remains and then pulverizing them, finally removing any toxins, such as tooth fillings. The end result is a fine powder which can be added to water to create something akin to compost. Now, there is an even more direct route to enter your final rest as rich, life-giving soil.

Washington is the first state in the United States to legalize composting human bodies, CNN reports. Recently, Governor Jay Inslee signed a bill into a law that will go into effect in May 2020. Until the law takes effect, only burial and cremation are legal means of disposing of human remains in Washington.

BBC reports that lying in the open, the decomposition of a body can take months of blistering, bloating and smelling. Under ideal conditions though, a body can decompose in as little as a month. This relatively quick decomposition time allows human remains to be composted and quickly returned as soil instead of slowing the decomposition as much as possible as a traditional burial tends to do. A new method involves using heat-loving bacteria and heating the human remains to a high enough temperature the make the resulting soil safe to handle. The process of composting humans is already set to be a commercial enterprise as soon as the change in law in Washington comes into effect.

Recompose is a new company offering people the option of being composted after death. The method used by recompose is just a modification of a method already used on livestock that are composted. Livestock and humans decompose in a very similar manner, the largest problem is the greater risk of disease transmission from the remains of humans compared to other animals. The method is said to use 1/8 of the energy used for traditional cremation and save 1 metric ton of carbon compared with other methods of burial, making the method more desirable than cremation which merely saves land space used in burials. Financial cost is also a factor for most when it comes to funerary rites.

BBC reports that the median cost for burial and funeral services in the US is over $7,000, with cremation being much more reasonable with an average cost of around $1,100. With Recompose being a small company as of yet, it’s unclear how affordable the cost of being composted will be for the average consumer. One thing to consider though is the value to the loved ones of the deceased. The end result of composting, a process that also adds other organic material, such as wood chips is about two wheel barrow loads of soil.

Soil from a composted loved one is valuable, not just for gardening. The soil is also a way for the deceased to nourish not only plants but by proxy, their living family members. This idea may be disturbing, akin to cannibalism to some, but considering the true nature of cycles of energy and nutrition, it’s something we probably already participate in. Like it or not, the dead feed everything we eat and sometimes, there may even be remnants of a dead person. For me, embracing this cycle and finding nourishment from a dead loved one is empowering, a way to reflect on our own mortality and the value of life.