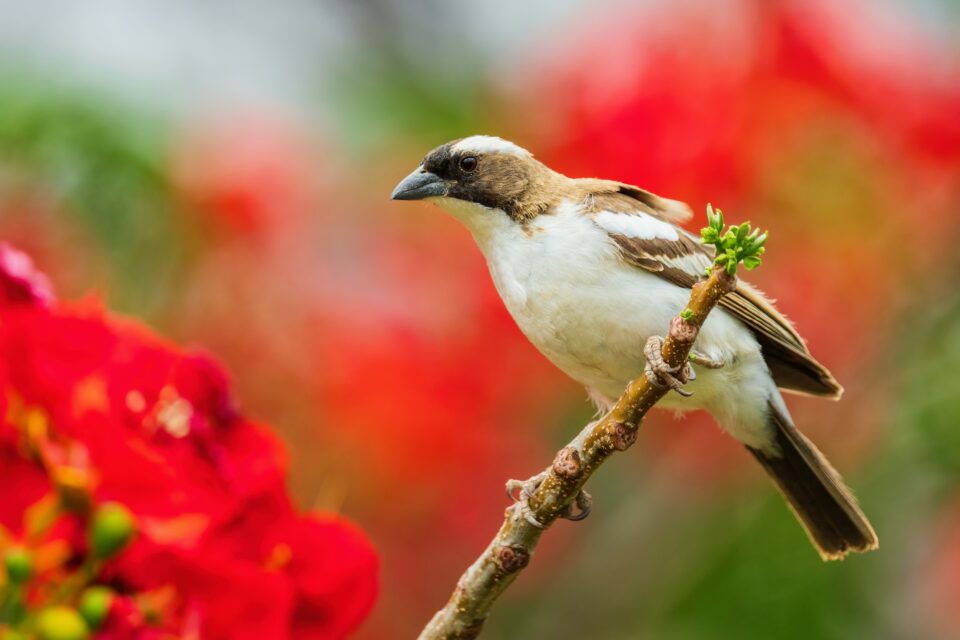 Cooperative breeding in birds has long fascinated evolutionary scientists. This reproductive strategy involves a single breeding pair that lay eggs and are then assisted in chick rearing by a number of helpers. The helpers forgo the opportunity to reproduce in favor of helping raise their siblings.

A recent study of white-browed sparrow weavers in the Kalahari Desert casts new light on the possible evolutionary origins of this apparently selfless behavior. White-browed sparrow weavers occur in the semi-arid regions of southern Africa where rainfall is unpredictable. They form family groups of up to 12 individuals and each group builds a number of scruffy nests in a single tree. One nest will be used by the breeding pair while the other nests are used by the “helpers” for roosting.

The research is based on 12 years of field work conducted in the Tswalu Kalahari Reserve by scientists from the University of Exeter. The findings show that families with larger numbers of helpers manage to raise more chicks than families with fewer helpers, but only during dry conditions when rainfall is poor. During wet conditions, families with more helpers actually fare worse in terms of reproductive success.

This means that cooperative breeding does not improve overall reproductive success but may protect birds from total reproductive failure when weather conditions are more severe. “We were really surprised – our findings suggest that the birds co-operate to cope with the unpredictability of their environment,” said Dr Andrew Young, of the Centre for Ecology and Conservation on Exeter’s Penryn Campus in Cornwall.

“This is an exciting discovery, because other studies have found that cooperative behaviour among birds is associated with unpredictable environments worldwide, especially those with variable rainfall.”

For most animal species, genes are passed on to future generations through reproduction. However, in cases where some individuals do not breed but help to raise the offspring of relatives, they may still be passing on a significant proportion of their own genes.

In white-browed sparrow weaver families, the helpers are offspring of the breeding pair, which means that they are improving the survival rate of their younger siblings. On average, animals share 50 percent of their genes with their siblings, just as a parent shares 50 percent of its genes with an offspring. Therefore, by helping siblings to survive, white-browed sparrow weaver helpers are also ensuring that copies of their genes are passed on. This process is known as “kin selection.”

Since the presence of helpers in white-browed sparrow weaver families does not increase the overall reproductive success of the breeding pair, however, cooperative breeding in this species cannot be explained simply by classical evolutionary theory. Instead, it appears that co-operation helps the birds to cope with the unpredictability of their environment.

“Bet-hedging strategies like this are all about reducing the risk of total failure when you can’t predict what is going to happen,” explained Dr. Pablo Capilla-Lasheras. “Our findings suggest that co-operation may serve that purpose – it allows sparrow weaver families to enjoy some breeding success whatever rainfall conditions they experience.”

“This observation allows us to be more confident that having more helpers – rather than simply living in bigger groups – is the cause of the effects we witnessed.”

The authors conclude that, as global climate change leads to more unpredictable and extreme weather patterns in the future, species with co-operative breeding systems may be better placed to cope.