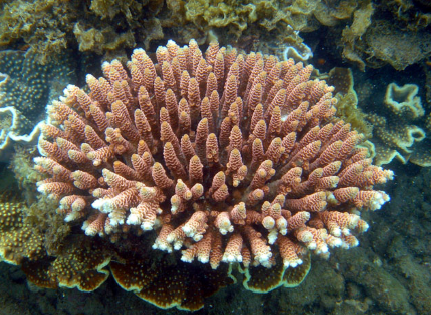 Finally some optimistic news for coral in Earth’s warming oceans

These days, it seems like we’re getting only bad news about the state of coral in the Great Barrier Reef. Between overfishing, climate change, and the resulting ocean acidification, it’s hard to feel optimistic about the future of this unique and diverse ecosystem. But a new study reported in PLOS Genetics may finally have some good news.

Researcher Mikhail Matz from the University of Texas at Austin and his colleagues developed a model to estimate the ability of a specific coral species to evolve to warming ocean conditions by redistributing existing heat-tolerance genes. The coral species – Acropora millepora – is commonly found in the Great Barrier Reef. This model was programmed to take into account the coral’s present-day genetic diversity and how far its larvae migrate before settling down.

The results of the model predict that the coral will become more sensitive to temperature swings, which will result in occasional die-offs. But ultimately, coral populations will be able to adapt to temperatures throughout the reef and could persist for at least another 100 years. However, it is uncertain whether or not corals will be able to adapt any further, and depends on a number of unknown parameters of coral genetics.

The study shows that, while recent coral bleaching events are certainly worrisome, they do not necessarily indicate that there is an imminent coral die-off on the horizon. These findings can also help inform future reef management strategies, leading to interventions that reshuffle coral genetic diversity throughout the reefs, which could enhance the coral’s chances of survival as climate change progresses.