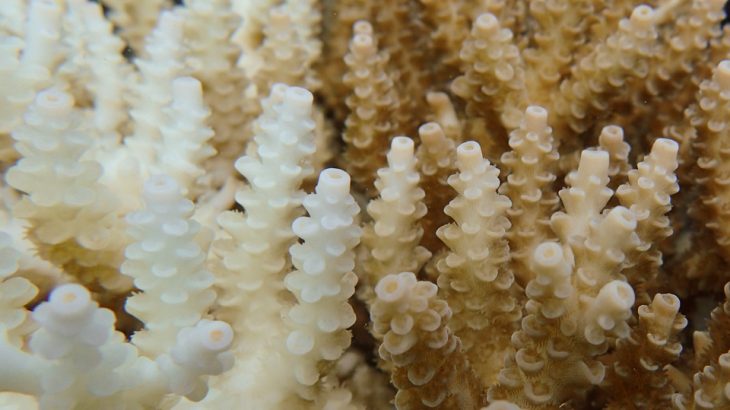 Scientists have found that dramatic changes in ocean salinity trigger the same stress response in corals as extreme heat. For example, when severe freshwater flooding greatly reduces the salinity of the seawater, corals can experience potentially fatal “freshwater bleaching.”

The researchers used the sequenced genome of the common reef-building coral Acropora millepora to detect changes in the coral’s biology when exposed to a sudden drop in seawater salinity. The experts observed a biochemical response which was similar to that from marine heatwaves, but potentially more damaging.

“Using the sophisticated labs at the National Sea Simulator, we put both young and adult corals under a salinity stress test to see how they respond to differing salinity concentrations,” said study co-author Dr Jean-Baptiste Raina of the University of Technology Sydney. “We found that there was a common response between both coral life-stages – with the younger corals being more sensitive to low salinity conditions, but faring slightly better with exposure over time.”

Study senior author David Miller is a professor at the ARC Centre of Excellence for Coral Reef Studies at James Cook University.

“In general, we found that the coral’s cells launch a similar chemical response to reduced salinity as they do for heat stress,” said Professor Miller. “However, unlike the heat stress response, corals exposed to reduced salinity experience a complete collapse of their internal cellular protein balance, suggesting that their cells are in deep trouble.”

Severe freshwater flooding recently occurred off the coast of northeast Queensland as a result of unusually intense rainfall during the monsoon season. The frequency and severity of extreme rainfall events is expected to increase over the next three decades, which means that interventions to increase the resilience of coral reefs are urgently needed.

“Corals are sensitive organisms, known to only tolerate slight changes in their environment. Thriving in clear, sunlit waters – the majority of reef-building corals are found in tropical and subtropical waters with a salinity between 32 to 42 parts per thousand,” explained Professor Miller.

“During the recent flooding, there are reports that nearshore reefs were exposed to roughly half the normal ocean salinity. Our research shows that this kind of environmental change causes a shock response in corals that prevents normal cell function.”

The study is published in the journal BMC Genomics.