Cuttlefish have a surprising capacity for delayed gratification • Earth.com 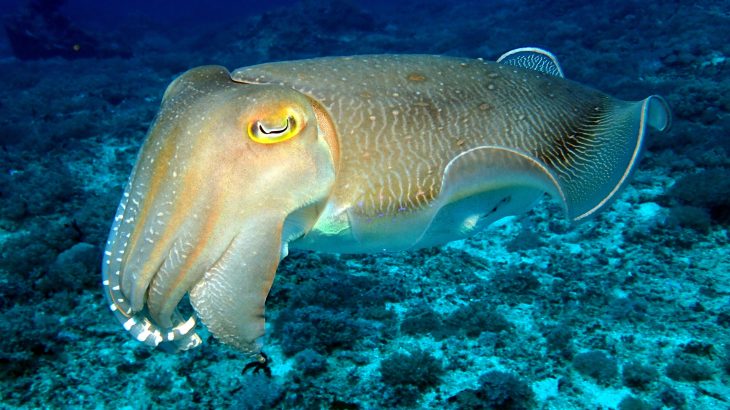 Cuttlefish have the capacity to delay gratification, according to a surprising new study from the Marine Biological Laboratory (MBL).

The experts found that cuttlefish can resist a tempting meal and hold out for a better one. Furthermore, the researchers discovered that individual fish who delayed gratification the longest also performed better in a learning test.

The study represents the first time a link between self-control and intelligence has been demonstrated in an animal other than humans and chimpanzees.

“We used an adapted version of the Stanford marshmallow test, where children were given a choice of taking an immediate reward (1 marshmallow) or waiting to earn a delayed but better reward (2 marshmallows),” said study lead author Alexandra Schnell of the University of Cambridge.

“Cuttlefish in the present study were all able to wait for the better reward and tolerated delays for up to 50-130 seconds, which is comparable to what we see in large-brained vertebrates such as chimpanzees, crows and parrots.”

The cuttlefish that could wait longer for a meal exhibited greater cognitive ability. The fish were trained to associate a visual cue with a food reward. Then, the conditions were changed so that the reward became associated with a different cue.

“The cuttlefish that were quickest at learning both of those associations were better at exerting self-control,” explained Schnell.

The experts said that the reasons why cuttlefish have evolved the capacity for self-control is a mystery.

Among humans, delayed gratification is thought to strengthen social bonds. This ability may also benefit tool-building animals, who must hold off on hunting while they construct tools.

However, noted the researchers, cuttlefish are not social species and they do not build tools. The study authors propose that delayed gratification may be a byproduct of the cuttlefish’s need to use camouflage for survival.

“Cuttlefish spend most of their time camouflaging, sitting and waiting, punctuated by brief periods of foraging,” said Schnell.

“They break camouflage when they forage, so they are exposed to every predator in the ocean that wants to eat them. We speculate that delayed gratification may have evolved as a byproduct of this, so the cuttlefish can optimize foraging by waiting to choose better quality food.”