Dairy calves prefer to be housed with a companion • Earth.com 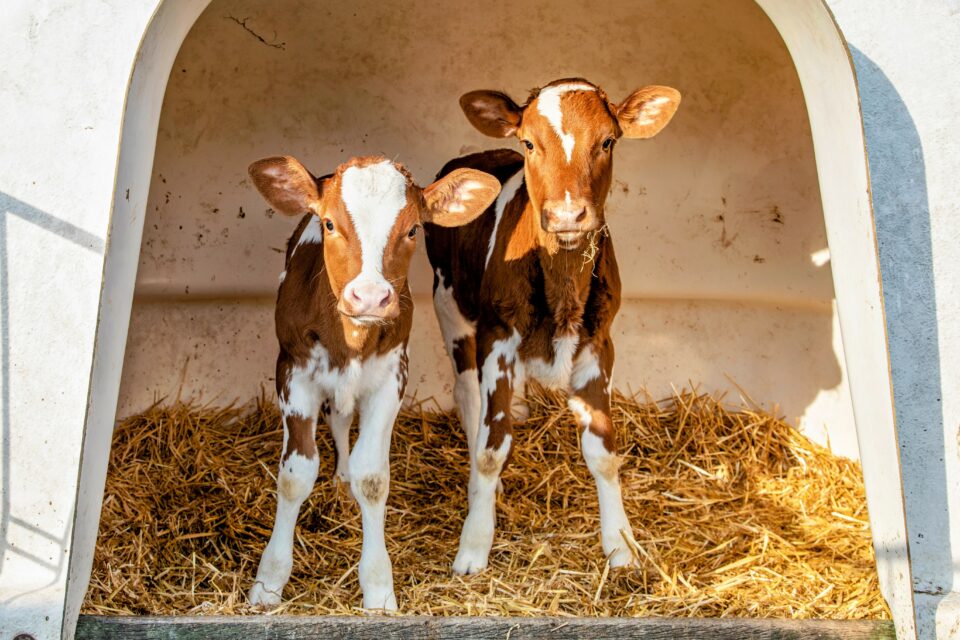 Dairy calves prefer to be housed with a companion

Newborn dairy calves are most often housed separately from each other after being removed from their mothers. Farmers state that keeping calves separate reduces the risk of disease transmission, prevents the calves from suckling on one another, and enables more careful feeding and monitoring of individual calves during the first weeks or months of their lives.

Approximately 75 percent and 60 percent of preweaning dairy calves in the United States and Europe, respectively, are housed individually, despite the growing criticisms of this practice in terms of its impacts on calf behavior, welfare and health. The alternative of raising young calves in social groups has, however, received increasing support from scientific quarters and from the concerned public.

A new study published this week in JDS Communications, the journal of the American Dairy Science Association, quantifies the motivation of socially naive calves to seek companionship with another calf, when they have the choice.

“Past behavioral studies have indicated that lack of social interaction can negatively affect calves’ feed intake, social skills, coping abilities, and cognitive performance,” stated lead investigator Dr. Marina von Keyserlingk. “However, previous studies on social motivation among young cattle have not addressed the first six to eight weeks of life, when individual housing is the most common.”

In the study, 10 male Holstein calves (average age 5.4 days) were separated into pairs, one of each pair being termed the “subject” while the other was the “partner.” Each pair was housed in a facility consisting of a central home pen with adjacent pens to the left and the right. Pens were separated by one-way push-gates made of plexiglass sheets. After the morning feed of milk, the subject was placed in the central pen, the partner was randomly allocated (by coin toss) to one of the side pens, and the other side pen was left empty.

For 15 days, the calves were checked twice daily at the time of milk feeding (approximately 0800 and 1600 h). At that time, the subject would be found in the central pen, or could have pushed his way through the door into a side pen, either the one containing the partner calf, or the one that was empty. The push-gates swung closed after a calf passed through and would not open in the opposite direction. The subject was returned to the central pen at feeding time.

Each time the subject had pushed his way into one of the side pens, the weight of the gate into that side pen would be increased. This meant that gates were relatively light to push open at the start of the study, when calves were learning the system, but they became more difficult to push as the experiment continued. The maximum weight pushed and number of pushes by each subject calf over the 15-day trial were recorded separately for the two side pens.

“Each time the test calf pushed open the gate to access a side pen, he would remain in it until the next milk feeding (approximately 0800 and 1600 h), at which time he was returned to the central home pen,” explained Dr. von Keyserlingk. “After each successful pushing event, additional weight was added to the gate – initially a small amount, then incrementally higher.”

With this design, the researchers were able to quantify the motivation of the young calves to access company in the form of the partner calf. No prior training of the subject calf was necessary, and the calves learned quickly how to open the gates after first coincidentally pushing a gate open as they investigated it.

The researchers found that, of the 10 calves tested, 8 pushed more weight for the pen on the social side, 1 pushed more for the empty side, and 1 pushed the same weight for both sides. Over the 15-day trial, calves pushed gates weighing, on average 1.0 kg more in order to access the social pen. All calves but one opened a gate on the first day of testing, with the remaining calf pushing a gate open for the first time on the third day.

The results indicate that young calves are motivated to seek full social contact, even when they have to work harder to achieve this. They are clearly social animals and derive benefit from contact with other calves.

A recent U.S. survey found that approximately half the participants considered individual housing of calves unacceptable, often mentioning the lack of socialization as a major issue. The results of the current study add to the body of research evidence that highlights the importance of social contact for calves.

The authors also note that the testing method used in this study did not require training, but calves quickly learned to use the gates on their own, suggesting that this task could be readily used to assess spontaneous motivation in other situations as well.