Is the decline of the giant salamander inevitable? • Earth.com 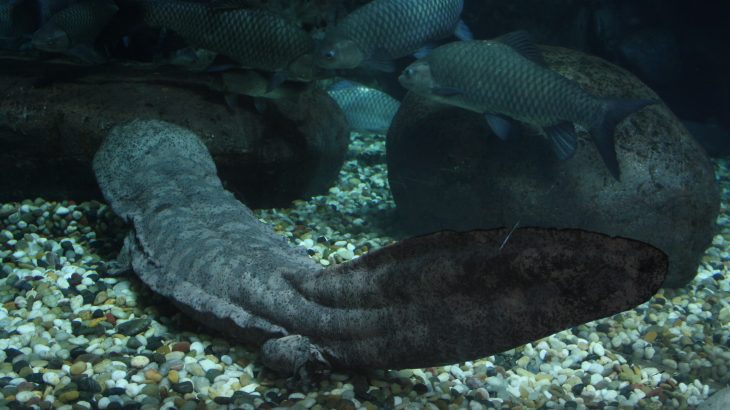 Is the decline of the giant salamander inevitable?

The Giant Salamander of China is an obscure animal, one you’d easily be forgiven for mistaking as an online hoax.  But the salamander is an actual animal, even five to eight different animal species. How much longer the Giant Salamanders will be actual living animals remains unclear.  Giant salamanders at first seem like a relic from a distant past that have outlived their time… and this isn’t entirely untrue.

The oldest fossil evidence of giant salamanders, reported in Nature in 2003, comes from the Middle Jurassic and were found in volcanic deposits in China dating back roughly 160 million years.  This fossil salamander is very similar to the living giant salamanders found in China today, which is why the group of salamanders are considered living fossils.

Until recently, the family Cryptobranchidae was thought to be a fairly small one, with only a few species known.  The Japanese Giant Salamander (Andrias japonicus) reaching impressive lengths of almost 5 feet and the Chinese Giant Salamander (Andrias davidianus) were thought to be the only living relatives to the United States less impressive Hellbender (Cryptobranchus alleganiensis), reaching lengths of 12 to 29 inches.

BBC News reported earlier this year that in fact, the Chinese Giant Salamander may be up to eight separate species.  Each of the eight species looks very similar, accounting for why it took a genetic study to define the separate species.

All together, the Chinese Giant Salamander has a strange appearance from the standpoint of a bipedal ape.  The animal’s body is flattened for a life in the bottom of streams and ponds. The head is wide and flat, reminding me a little bit of a less exaggerated Diplocaulus, the so-called boomerang headed amphibian from the Permian, a distant relative.

The animal is an indistinct mottled grey/greenish color.  Eyes are on the top of the Chinese Giant’s head and are largely useless.  Instead of seeing, the over-sized amphibian uses special sensory nodes over its entire body to hunt for insects, crabs, smaller amphibians and mammals, not being a very picky eater.  Eggs are laid in a hidden cavity underwater and guarded by the male salamander until they hatch. Captive salamanders have lived up to 60 years but the average lifespan is unknown, according to Wikipedia.

The largest wildlife survey carried out to date in China found the giant salamanders at 4 of 97 sites surveyed across 16 of China’s 23 provinces.  Genetic evidence showed that the salamanders found in the wild may not have been native to the areas they were found, instead released from salamander farms where the animals are raised as food delicacies.

The Japanese Giant Salamander is doing better, listed by IUCN as only nearly threatened, but the population is still said to be declining.  The Japanese Salamander is also sometimes hunted as a delicacy and silt runoff caused by deforestation may cause the salamander problems in the future.

Eastern hellbenders are the only giant salamander found in the US and probably the one with the most interesting common name.  The hellbender is of course much smaller than the Chinese and Japanese salamanders that it shares a family with. Perhaps ‘rather large’ salamander is a more apt description for the hellbender than ‘giant’.  The hellbender is also more visually attractive than its Asian relatives.

The salamander is an olive green color spotted with bright orange and a pale belly.  The hellbender specializes in cold streams with fast flowing water and is only found in a small area of south eastern mountains.  The Ozark hellbender is a subspecies of the eastern hellbender. The Fish and Wildlife Service reports that the Ozark hellbender is listed as endangered under the Endangered Species Act.  The service says that the population of Ozark hellbenders, limited to only 8 rivers historically has declined to a point where only about 590 individuals remain in the wild, remaining in only 3 rivers.  Researchers at one river found 1,150 hellbenders along a 1.7 mile stretch in 1973. In 2006, only 200 individuals could be found in the same area.

The Chinese Giant Salamanders are clearly doing the worst of all the giant salamanders in the world.  It’s not hard to imagine them simply being the first of the living giant amphibians to become extinct with the others following eventually.  The ancient lineage of giant salamanders on earth is no guarantee for their future survival, they’ve already survived the extinction of many others, most famously the dinosaurs.  Whether genetics can be taken into account in the survival of all of China’s giants will be important. Even survival of one hybridized species of giant salamander would be better than the extinction of all species.  Only the future will tell.