Even reefs deep below the surface aren’t safe from bleaching • Earth.com 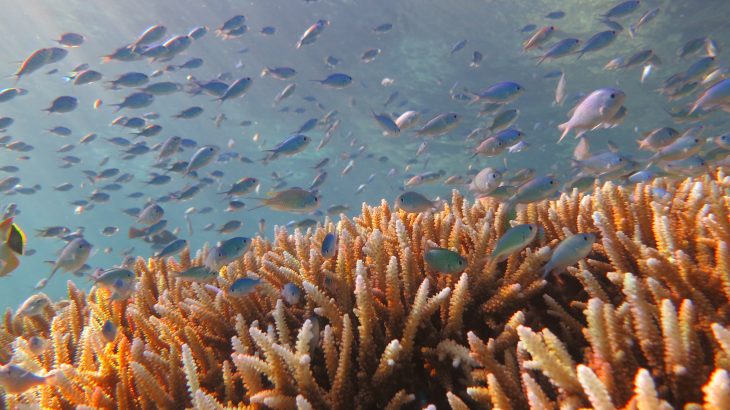 Even reefs deep below the surface aren’t safe from bleaching

Coral bleaching is not limited to the reefs close to the surface, as a new study found that reefs previously thought immune to the most adverse effects of climate change are just as susceptible to bleaching as their surface counterparts.

Deep sea coral reefs were thought a refuge from the ocean temperature changes and acidification that drive mass coral bleaching events, but researchers from the California Academy of Sciences and the Center of Marine Sciences in Portugal found that this is not the case.

The study was published in the journal Nature Communications and the results highlight the risks of mass bleaching for both shallow water and deep reefs.

In 2016, one of the most devastating mass coral bleaching events occurred along the Great Barrier Reef where one-quarter of the reef died out.

The researchers focused on this event to see if the bleaching was isolated to the shallow reefs or if deep reefs were equally affected.

“During the bleaching event, cold-water upwelling initially provided cooler conditions on the deep reef,” said Pim Bongaerts, co-author of the study. “However, when this upwelling stopped towards the end of summer, temperatures rose to record-high levels even at depth.”

Divers also surveyed multiple sites along the Great Barrier Reef and reported that nearly a quarter of the deep reefs had been affected by mass bleaching and mortality as far down as 131 feet below the surface.

“It was a shock to see that the impacts extended to these dimly lit reefs, as we were hoping their depth may have provided protection from this devastating event,” said Pedro Frade, the lead author of the study.

The study shows that there truly is no safe zone for coral reefs and that even those reefs located hundreds of feet below the surface are susceptible to climate change.

“Unfortunately, this research further stresses the vulnerability of the Great Barrier Reef,” said Ove Hoegh-Guldberg from the University of Queensland, where the study was conducted. “We already established that the refuge role of deep reefs is generally restricted by the limited overlap in species with the shallow reef. However, this adds an extra limitation by demonstrating that the deep reefs themselves are also impacted by higher water temperatures.”