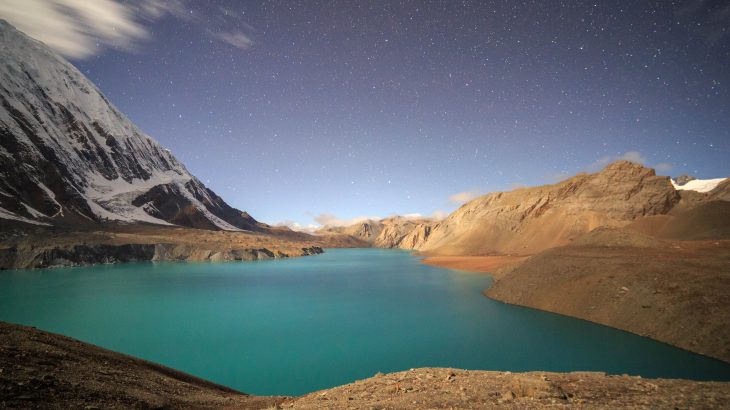 The persistent loss of snow cover in the Himalayan-Tibetan Plateau region is fueling a destructive algal bloom in the Arabian Sea, according to new research from the Earth Institute.

Millimeter-size planktonic organisms called Noctiluca scintillans, which were rarely seen in this region two decades ago, are now thriving in the Arabian Sea. The organisms are forcing out the phytoplankton that support the local food chain.

The Noctiluca form thick, foamy green algal blooms that are large enough to be seen from space. The destructive blooms are returning each year and persisting for several months at a time.

As the Noctiluca disrupt the base of the marine food web, they are essentially threatening local fisheries that support more than 150 million people.

Led by Joaquim I. Goes, the Earth Institute team used field data, lab experiments, and decades of NASA satellite imagery to link Noctiluca in the Arabian Sea to melting glaciers and a weakened winter monsoon.

“This is probably one of the most dramatic changes that we have seen that’s related to climate change,” said Goes. “We are seeing Noctiluca in Southeast Asia, off the coasts of Thailand and Vietnam, and as far south as the Seychelles, and everywhere it blooms it is becoming a problem. It also harms water quality and causes a lot of fish mortality.”

In the wintertime, cold monsoon winds blowing from the Himalayas usually cool the surface of the Arabian Sea. These colder waters sink and are replaced with warmer, nutrient-rich waters from below.

Meanwhile, phytoplankton thrive in the nutrient-rich surface waters, and communities and fisheries can count on the arrival of an abundance of fish that feed on the phytoplankton.

However, shrinking glaciers and declining snow cover in the Himalayas have caused the monsoon winds to become warmer and more humid. This impacts the upwelling process and leaves the upper ocean lacking in nutrients.

While these conditions put diatoms and other phytoplankton at a disadvantage, Noctiluca flourish because they do not rely solely on sunlight and nutrients and can survive by eating other microorganisms.

According to the researchers, the study provides compelling new evidence of the cascading impacts of global warming on the Indian monsoons and the economic stability of large populations along the Arabian Sea.

“Most studies related to climate change and ocean biology are focused on the polar and temperate waters, and changes in the tropics are going largely unnoticed,” said Goes.

Disproportionate changes and biodiversity loss in the tropical oceans are changing faster than what conventional climate models have predicted. Goes said that this may foreshadow dire consequences over the long term for countries in the region that are already gripped by socioeconomic problems from war, poverty, and loss of livelihoods.