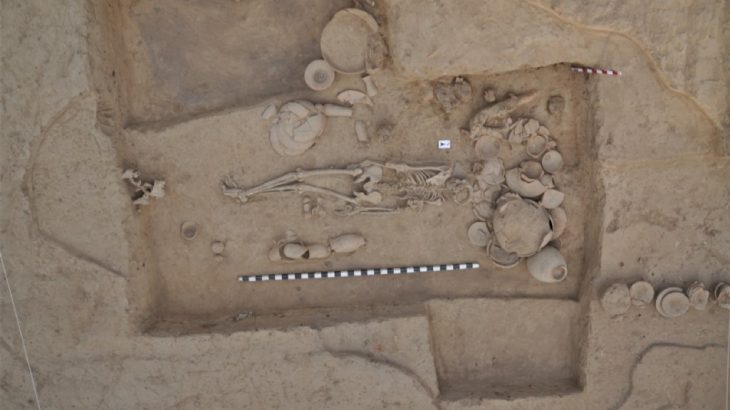 The largest-ever study of ancient human DNA sheds light on the early history and migrations of people in Central and South Asia from the Mesolithic Era to the Iron Age.

A team of archaeologists, geneticists and anthropologists analyzed and sequenced the genomes of 524 ancient individuals from Central and South Asia, increasing the number of total ancient studied and published genomes worldwide by 25 percent.

The researchers sequenced ancient human genomes, compared the DNA data to other previously sequenced genomes and reviewed key archeological and linguistic records from the region.

The expansive research was published in two papers in the journals Science and Cell and has helped put several debates about the early origins of language and farming to rest.

“These studies speak to two of the most profound cultural transformations in ancient Eurasia–the transition from hunting and gathering to farming and the spread of Indo-European languages, which are spoken today from the British Isles to South Asia–along with the movement of people,” said Vagheesh Narasimhan, a co-first author of both papers.

One of the biggest takeaways of the study is that it helps confirm the theory that Indo-European languages spread and first arrived in Europe via the Eurasian Steppe.

More than 400 languages including Hindu, Bengali, Persian, Russian, Spanish, and English are considered Indo-European, and as the largest language family on Earth, it’s long been wondered how the roots of these languages spread.

It’s long been thought that Indo-European languages either arrived in Europe from herders traveling through the Steppe or by farmers migrating from Anatolia, which is present-day Turkey.

“We can rule out a large-scale spread of farmers with Anatolian roots into South Asia, the centerpiece of the ‘Anatolian hypothesis’ that such movement brought farming and Indo-European languages into the region,” said David Reich, a co-senior author of the papers. “Since no substantial movements of people occurred, this is checkmate for the Anatolian hypothesis.”

The researchers linked present-day speakers of certain branches of Indo-European languages to a subgroup of ancient Steppe pastoralists that spread into Europe 5,000 years ago before returning to Central and South Asia.

Another important mystery solved by the study is how ancient populations shifted from hunting and gathering to farming. Did settlements switch to farming as populations migrated into new areas or did they copy other communities?

The researchers found that the practice of farming in Iran and Turan coincides with the arrival of Anatolian ancestry.

However, the history of farming in Central and South Asia is not clean-cut and the researchers found that by 5,000 years ago, a two-way pattern of ancestry and farming technology split north and south along the “Bronze Age Silk Road.”

In South Asia, the researchers didn’t find any common ancestry to Anatolian people who helped spread farming west, rather South Asians are related to an Iranian lineage that separated from early farmers and hunters and gathers.

For South Asia, farming was a practice adopted by local foragers rather than through the spread of farming cultures.