Many of your dog’s quirky behaviors are inherited survival tactics • Earth.com 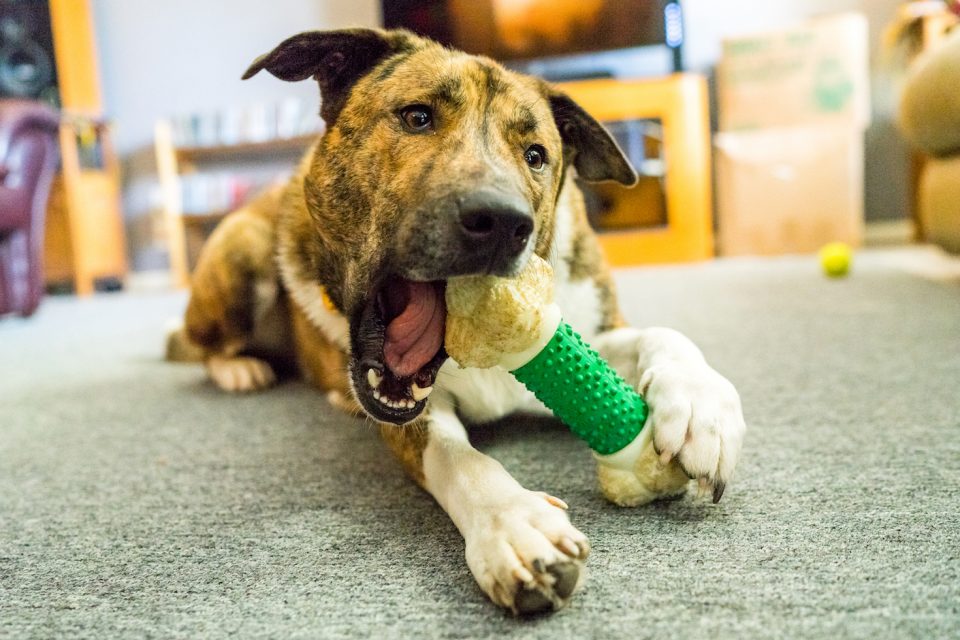 Many of your dog’s quirky behaviors are inherited survival tactics

If you’ve ever wondered why your dog does quirky things like shaking their toys vigorously back and forth, digging in their blankets and bedding before laying down, or following you around the house everywhere you go, chances are it stems from an ancient behavior deeply embedded in their genome.

Just like humans, dogs have inherited many quirks from their canine ancestors dating back to before and as a result of domestication.

The domestication of dogs was a long process dating back 20,000 to 40,000 years ago, experts say. Canines didn’t instantly become man’s best friend but rather, as humans started forming permanent settlements, wild dogs and humans slowly formed a symbiotic and mutually beneficial relationship.

For the dog, humans offered a guaranteed meal that required little expended energy unlike hunting and scavenging for food. For humans, dogs provided protection. Eventually, as dogs and humans evolved together, canine companionship evolved with it.

Today, dogs are acutely attuned to their owners and surroundings, but before domestication, dogs were fierce opportunists and pack orientated, traits that have been watered down and dulled through the years.

The silly behaviors that we find cute or strange once served a crucial purpose to aid in survival, so let’s break down some of the more entertaining and unusual quirks that our dogs do on a daily basis.

While you may think your dog has a strange affinity for squeaker toys and stuffed animals, the truth is, makers of dog toys are catering to some of our canine friend’s most primal hunting instincts.

That squeak that your pet can’t get enough of? Well, with enough imagination, the squeak sounds like the high-pitch yelp of a dying animal after being stealthily hunted down, and that’s exactly what your dog’s ancestors did thousands of years ago.

It’s hypothesized that the squeaker reminds dogs of an injured animal and that it is also rewarding to cause a reaction out of a toy after biting down on it.

Wild dogs and wolves rely on their keen hunting prowess and scavenging abilities to get food, and the quickest way to kill something if you’re a dog is by snapping the neck with a vigorous shake. This method is still used by wolves and other wild canine cousins today.

This is why many dogs like to vigorously shake their stuffed animals during play, their mimicking that instinctual neck snap.

Your dog is obviously smart enough to know that his favorite stuffed animal isn’t food, but those instincts, once important for survival, run deep.

It’s always smart to ensure that any new toy can withstand your dog’s preferred play roughness and supervise them in case the toy does start coming apart.

Let’s go back again in time and follow our dogs’ ancestors as they hunt and carry their prey back to their den. This behavior too has been preserved through the ages and could explain why your dog is obsessed with fetch, according to Katelyn Schutz, a certified professional dog trainer of Wisconsin Pet Care.

“When you look at the domesticated dog’s closest relatives, such as the wolf or coyote, there is a natural canine behavior called ‘“prey-carrying,’” Schultz writes. “After a hunt, sometimes the wolf will carry the prey back to the den to be consumed safely with the pack, essentially ‘retrieving’ dinner for the family.”

Some dogs have been specifically bred to hone in on this fetching instinct which is where breeds like retrievers come in, but even the average mutt won’t say no to a game of fetch with their favorite ball.

Almost everything your dog does, including the way he or she sleeps, can be traced back to natural instincts.

One peculiar bedtime behavior that you’ve probably noticed is your dog’s incessant scratching, pawing, digging, and turning in their bed or blankets before settling down for a nap.

You could obviously and rightly assume that dogs do this to get comfortable, but there’s a little more to it than just creating the perfect place to nestle.

“There has been some conjecture that digging at bedding, upholstered furniture or soft flooring (such as rugs or carpets) is akin to digging a hole or spreading bedding to make a nest,” Dr. Elizabeth Stelow, chief of animal behavior services at the University of California, Davis, told The Dodo. “This is the most likely purpose when the dog then lies down in the specific spot it was scratching.”

In the wild, scratching, digging, sniffing and circling are all ways to ensure that an area is safe, dry and, yes, comfortable. When a dog circles and paws at the ground, it helps to flatten the grass, shrubs, and leaves into a more suitable sleeping nest.

Unfortunately for your comforters or your pup’s bed, this holdover from dog days of yore can wear out pillows and dog beds pretty quickly, especially if your dog likes to chew and destroy their fluffy surroundings.

Even the most healthy, well-adjusted and well cared for dog will still get a little downhearted when their owner isn’t around. And many a dog parent can attest to the needy behaviors their pets exhibit such as following their owner everywhere around the house.

Our dog’s natural proclivity to function in a pack, combined with the long process of domestication that turned humans into crucial providers of food, safety, and love, help explain why our four-legged friends need to be with us as much as possible.

At the base level, you, the owner, equal food and fun to your dog, so your dog is not going to let it’s meal ticket get too far away from its line of site.

“Look at it from the dog’s point of view,” Erin Kramer, a professional certified dog trainer told the American Kennel Club. “You might think you’re the cool one, but the person your dog is attached to is the road to everything wonderful and magical. The focus is on that person because of what they give access to.”

While once dogs were scrappy scavengers, rushing to the food bowl for kibble is about as primitive as it gets for most dogs today.

Those same instincts that led to domestication, telling dogs that humans were trustworthy, are deep seeded into your dog’s brain.

While sometimes this can lead to unhealthy separation anxiety, if your dog likes to stick by your side, it’s just doing what comes naturally and what dogs evolved to do.