Double whirlpools spotted in the ocean for the first time • Earth.com 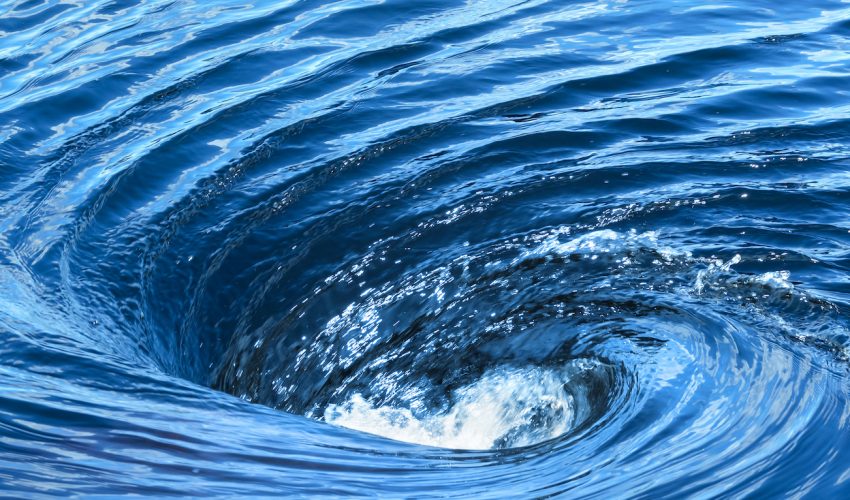 Double whirlpools spotted in the ocean for the first time

Two interconnected whirlpools have been witnessed in the ocean for the first time between Australia and New Zealand. A single whirlpool, or an eddy, is a common occurrence in the ocean, but a pair of whirlpools was something that was only a myth until now.

For decades, scientists have believed that a pair of whirlpools, which is known as a modon, was possible. Oceanographer Chris Hughes from the University of Liverpool is the first person to ever spot a modon.

“Ocean eddies almost always head to the west, but by pairing up they can move to the east and travel ten times as fast as a normal eddy, so they carry water in unusual directions across the ocean,” explained Hughes.

“What we found was a pair of eddies spinning in opposite directions and linked to each other so that they travel together all the way across the Tasman Sea, taking six months to do it.”

While examining satellite images of the ocean’s surface, Hughes noticed a region of the water that was behaving unusually. He told Popular Science, “Almost all these eddies drift slowly westwards, but this little feature was going quickly eastwards.”

The experts established that this was, in fact, a modon. Based on this evidence, they looked at previous satellite imagery and identified nine other modons, which dated back to 1993. All of the previous events had taken place around Australia, while one double whirlpool was detected in the Atlantic Ocean.

The experts believe that this phenomenon takes place when two whirlpools collide in the ocean. The powerful motion of the whirlpools causes nutrients to rise to the surface of the ocean from the deeper, colder waters below.

The scientists theorize that these double whirlpools have enough force to suck up and transport minerals, heat, water, or even organisms to other parts of the ocean.

“My thinking is that these linked, fast moving eddies could ‘suck-up’ small marine creatures and carry them at high speed and for long distances across the ocean,” said Hughes.

The study is published in Geophysical Research Letters.