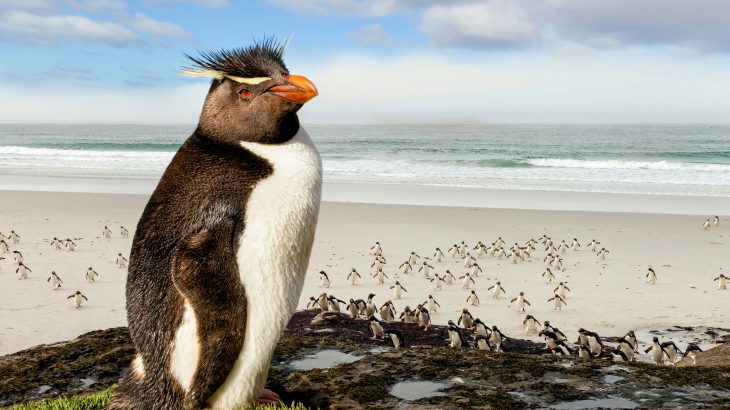 Drones can help monitor the health of remote seabird colonies

A new study has demonstrated that drone imagery combined with artificial intelligence is an effective yet inexpensive way to monitor remote seabird colonies.

Scientists at Duke University and the Wildlife Conservation Society (WCS) used machine learning to analyze more than 10,000 drone images of seabirds in the Falkland Islands.

The experts found that this method can be just as effective as traditional on-the-ground methods, while reducing labor costs and the risk of human error.

Located off the coast of Argentina, the Falklands are home to the world’s largest colonies of black-browed albatrosses and second-largest colonies of southern rockhopper penguins. The islands provide breeding grounds for hundreds of thousands of birds.

A deep-learning algorithm used by the researchers was able to recognize and count albatrosses with 97 percent accuracy and penguins with 87 percent accuracy. Overall, the automated counts were within five percent of human counts 90 percent of the time.

“Using drone surveys and deep learning gives us an alternative that is remarkably accurate, less disruptive and significantly easier. One person, or a small team, can do it, and the equipment you need to do it isn’t all that costly or complicated,” explained study lead author Madeline C. Hayes, a remote sensing analyst at the Duke University Marine Lab.

Monitoring large colonies of birds that are densely interspersed on remote islands has been a tedious process that can also disrupt the behavior of the birds.

For the drone survey, the WCS scientists collected more than 10,000 individual photos, which were converted into a large-scale composite image. Hayes analyzed the image using a convolutional neural network (CNN) to estimate the numbers of the two seabird colonies.

“A CNN is loosely modeled on the human neural network, in that it learns from experience,” said study co-author Professor David W. Johnston, director of the Duke Marine Robotics and Remote Sensing Lab.

“You train the computer to pick up on different visual patterns, like those made by black-browed albatrosses or southern rockhopper penguins in sample images, and over time it learns how to identify the objects forming those patterns in other images such as our composite photo.”

According to Professor Johnston, the new approach is widely applicable and greatly increases the ability to monitor the health of seabird colonies worldwide, as well as the health of the ecosystems they inhabit.

“Counting large seabird colonies of mixed species at remote locations has been an ongoing challenge for conservationists,” said study co-author Guillermo Harris.  “This technology will contribute to regular population assessments of some species, helping us better understand whether conservation efforts are working.”

The study is published in the journal Ornithological Applications.