Dung beetles may sound gross, but here’s why they’re important to ecosystems • Earth.com 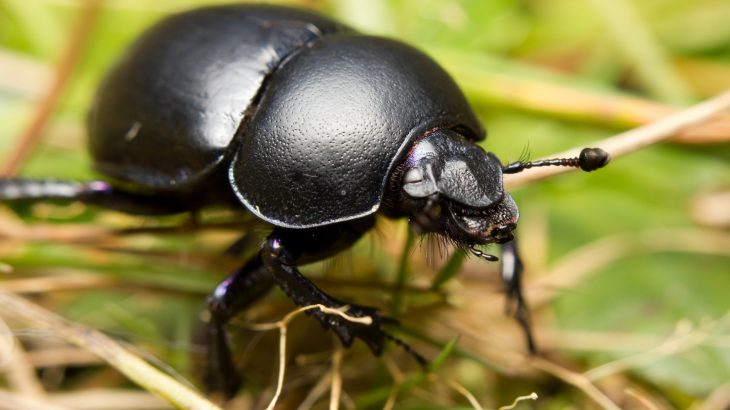 Dung beetles may sound gross, but here’s why they’re important to ecosystems

The first time I visited Ecuador, it was as part of a Tropical Ecology field course.  The first stop on the trip was Shiripuno Lodge, a research station and tourism lodge near the far western edge of the Amazon Rainforest on the Shiripuno River.  The course covered all aspects of wildlife biology, botany, and ecology in the region that could be covered in a week.  Hikes in the day and at night found a myriad of amazing, if often tiny wild creatures. One part of the trip was quite memorable – the dung beetles.

Dung beetles are one of the most intensively studied animal groups in tropical forests, according to Mongabay, and they truly are fascinating creatures.  I’ve watched scarabs roll their perfectly round balls across a dirt road in Wind Cave National Park and on hard pack soil in the desert southwest.  The Egyptians watched beetles with their balls and imagined a giant scarab rolled the sun across the sky.  Despite their fecal proclivities, many of the beetles are actually quite beautiful – some are brightly colored, armed with horns and spikes, tiny and dull, large or shiny.  I saw one that was the spitting image of a brightly painted Volkswagen Beetle.

One of the researchers teaching the field course in Ecuador cut up an old t-shirt and created small bundles of fabric.  Tied within the bundles was feces. These bundles strung over plastic cups of alcohol acted as effective dung beetle traps.  As students, we took turns collecting the beetles once an hour and putting them into labeled tubes. I myself went out in the dark along a mud path slippery with recent rain to collect beetles from several traps.

The exercise was technically research but it demonstrated something already known, dung beetles are more active in the early morning and around twilight as the sun sets.  It makes intuitive sense – beetles that eat feces are more active when animals are most likely to defecate. Morning after waking up or just before bedding down for the night (reverse that for nocturnal animals) are the most productive defecation times.  It was a simple experiment with satisfying results and very few materials needed to pull it off. What we know sometimes depends on how easy it is to carry out an experiment.

A paper published in Ecology Letters In 2007 is perhaps part of the popularity of dung beetles.  The paper authored by over twenty researchers compared the cost and benefit of surveying 14 different animal groups in the Amazon region.  They found dung beetles to be the least expensive animal group to survey, with easy monitoring carried out with simple supplies.

Interestingly, dung beetles have also been found to be one of the most telling animal groups in terms of how intact an ecosystem is.  This makes intuitive sense. You’d expect an animal that feeds on the excrement of other animals to indicate whether or not a large amount of wildlife was doing well.

Dung beetles are also sensitive to disturbance of their tropical forest homes.  Mongabay reports that beetles found in Brazil’s most endangered forest, the Atlantic forest, can show how long ago a forest was cut down (in secondary growth forest).  Other dung beetles are indicators of particularly undamaged forests.

Dung beetles themselves are incredibly diverse. Like many invertebrate groups, scarabs (dung beetles are a type of scarab) are found on every continent except Antarctica.  Of beetles, the most diverse order of insects, scarabs make up almost 10% with approximately 30,000 species, according to National Geographic.

Not all scarabs are dung beetles, though.  The dung beetles are spread across the world and have been used as indicators of ecological health not just in the neotropics but also in forests in Africa and Asia.

Evidence shows that certain dung beetle species are attracted to different types of dung and won’t eat other types, although a few of them find human waste to be particularly tasty.  Unsurprisingly, large dung beetles require larger piles of dung, while smaller beetles are fine with smaller droppings. Ecological health isn’t about the beetle itself, although they do play a role.  It’s also about the mammal populations that the beetles depend on. Dung beetles are important in other places far from tropical rainforests. There’s a chance that the dung beetle I saw in Wind Cave National Park was feeding on bison dung.

The Denverite reported last year that with the decline of bison in much of the western United States, dung beetles also declined.  The Rainbow Scarab (Phanaeus vindex) was once native to Colorado but it’s incredibly rare now, due probably to the horrible slaughter of the bison.  It’s possible that the Rainbow Scarab could’ve survived on similar cow dung but by the time settlers arrived with their imported European bovine, the die off of the beetle was complete.

Oikos Journal reports that it isn’t just the decimation of the bison population that was detrimental to dung beetles.  60% of large late Pleistocene mammals are now extinct, an event possibly caused by human hunting. Along with the extinction of animals like mammoths, mastodons, giant ground sloths and woolly rhinos, the larger dung beetles died off as well.  Other beetles studied for comparison actually showed an increase in size over time, which is consistent with adaptation for global warming, making it all the more likely that the extinction of large mammals also caused the extinction of dung beetles.

Today, human habitat destruction and overhunting are just two factors endangering more and more large mammals, and as much as 25% of mammal species are threatened with extinction.  With mammals dying off, we can expect the extinction or reduction of many dung beetles as well.  No one knows exactly the consequences of a dung beetle mass extinction but it’s likely, the ramifications from the extinction connected to the Pleistocene megafauna hasn’t caught up to us yet.

Dung beetles are important parts of ecosystems. Smithsonian Magazine reports that when European Cattle with their new type of dung were introduced to Australia, the native beetles were poorly equipped.  Half a million acres of grazing land was smothered in dung that couldn’t be cleaned up by the native dung beetles. Parasites thrived in the feces rich environment.  23 new species of dung beetle introduced to Australian rangeland have turned the situation around. Similarly, introduced beetles have helped clean up cattle dung in Madagascar, Hawaii, Easter Island, Vanuatu and New Zealand.