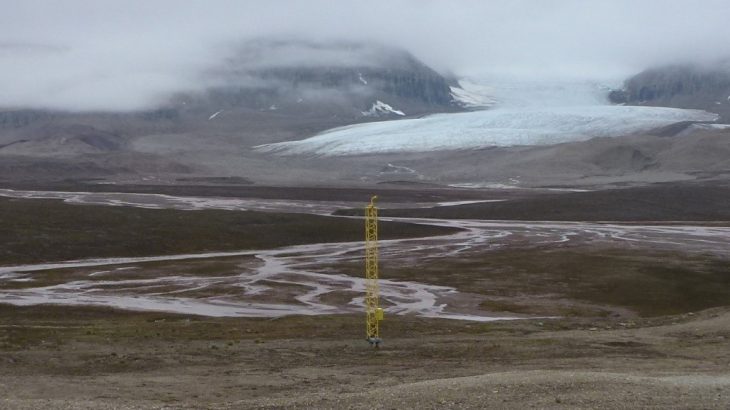 An international team of researchers has uncovered the effects of high-latitude dusts on low-level cloud glaciation — the process of converting water droplets to ice.

Published in the journal Nature Geoscience, this new information helps scientists understand how land surface factors contribute to cloud formation, as well as how clouds affect climate and perhaps even regulate climate on a global scale.

The ice crystals and water droplets within clouds maintain both the radiation balance of Earth’s atmosphere and Earth’s energy equilibrium. With the help of solids and minerals suspended in water droplets — called nucleation sites — water molecules begin to form ice crystals within clouds when cooled to 0-degrees Celsius. Dust particles act as ice nucleating particles (INPs) and cloud condensation nuclei (CCN), which both help the ice and water droplet formation within the clouds.

Prior studies have often focused on dust that comes from arid and semi-arid regions in low-mid altitudes and its effect on cloud nucleation. But new information shows that dust can also originate from ice- and vegetation-free areas in high altitudes. Do these dust particles — say, those from regions of glacial outwash plains, or regions of sand and gravel deposits that were carried by glacial melt-off— have the same effect on cloud nucleation in comparison to dust from low-mid altitudes?

“We found that dusts derived from glacial outwash plains can serve as very efficient nuclei for ice nucleation, as compared with desert mineral dusts,” said corresponding author Yutaka Tobo, Ph.D. an assistant professor at the National Institute of Polar Research. “This is because of the presence of small amounts of organic matter having very high ice nucleating ability.”

Additional recent studies have shown that dust emissions can also occur in Greenland, North America, and Iceland, Dr. Tobo added. However, the team is not yet sure about the ice nucleating ability of dust from these high-latitude areas.

“In addition,” he added, “it is expected that the recent rapid and widespread retreat of glaciers may lead to more active dust emissions from high-latitudes in the future. Therefore, further comprehensive studies will be necessary to understand the possible impact of high-latitude dusts on current and future aerosol-cloud-precipitation interactions in the Arctic, which is more sensitive to climate change than any other region of the world.”