Earth may once again have a supercontinent in 200 million years • Earth.com 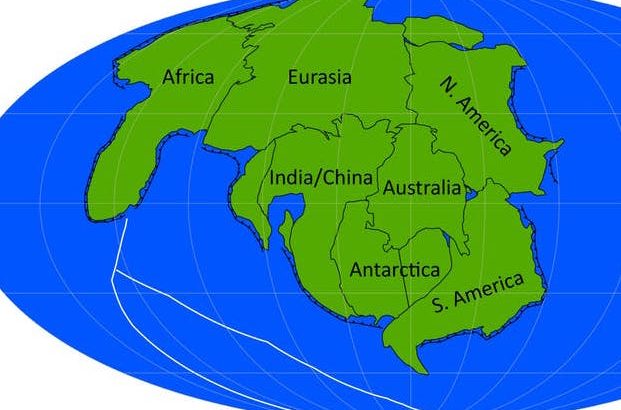 Earth may once again have a supercontinent in 200 million years

It’s hard to imagine that the continents are on a collision course millions of years in the making, but the Earth’s tectonic plates have been playing an endless game of bumper cars since the crust of the globe first formed.

Tectonic plates move around the Earth at speeds of a few centimeters per year, and throughout the Earth’s history, there have been instances where the plates came together and formed a supercontinent.

A supercontinent can last for hundreds of millions of years before breaking up again, and the last and most well-known supercontinent was called Pangea which first formed 310 million years ago

The earliest known supercontinent, Rodinia, formed during the Precambrian period and Pannotia, another supercontinent that preceded Pangea, formed 600 million years ago.

The cycle of supercontinents is ongoing, and although researchers cannot say for sure what the next supercontinent will look like, by studying plate movement and past supercontinent formations, it’s possible to come up with potential scenarios for what Earth will like millions of years in the future.

Writing for The Conversation, researchers Mattias Green, Hannah Sophia Davies, and Joao Duarte describe the four most likely scenarios for the formation of the next supercontinent.

Each scenario depends on a range of factors, but Pangea’s break up lends some key clues to what may happen with the next supercontinent.

This widening and narrowing of the world’s oceans along with seismic activity along subduction zones will play a large role in determining the next supercontinent formation.

Novopangea follows the collision of North and South America with Antarctica which will then latch onto Africa and Eurasia.

With Pangea Ultima, the researchers say that a huge Pacific ocean would surround the newly formed continent as the Atlantic ocean narrowed.

The Aurica supercontinent would occur if the Atlantic developed a new subduction zone and Australia would be at the heart of the supercontinent, surrounded by East Asia and the Americas.

Amasia is perhaps the most unusual formation as it relies on the northward trajectory of several major tectonic plates including Africa and Australia. All the continents then, except Antarctica would congregate around the North Pole with a wide open ocean separating Amasia and Antarctica.

Novopangea is the most likely scenario according to Green, Davies, and Duarte but the researchers say that exploring different scenarios  helps push the boundaries of what is possible.

“Investigating the Earth’s tectonic future forces us to push the boundaries of our knowledge, and to think about the processes that shape our planet over long time scales,” the three researchers conclude. “It also leads us to think about the Earth system as a whole, and raises a series of other questions – what will the climate of the next supercontinent be? How will the ocean circulation adjust? How will life evolve and adapt?”