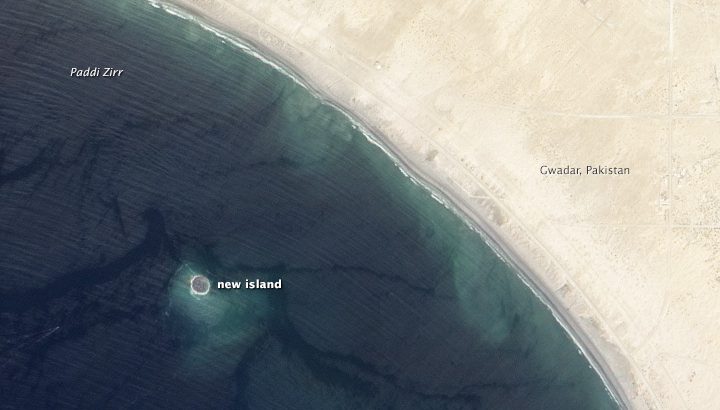 A tiny earthquake island off the coast of Pakistan has finally, after six years, disappeared under the sea.

The island was formed during the Balochistan earthquake series. On September 24, 2013, a 7.7-magnitude quake rocked southwestern Pakistan, killing at least 825 people in the sparsely populated region. The mainshock was felt throughout the region and as far away as Delhi, India and Muscat, Oman.

One of the effects was to raise the earthquake island – called Zalzala Jazeera or Zalzala Koh – in the northern Indian Ocean. The little island became a popular tourist draw, even though it was known to spew toxic and flammable gas from cracks in its surface.

“The island is really just a big pile of mud from the seafloor that got pushed up,” Dr. Bill Barnhart of the U.S. Geological Survey told the Daily Mail in 2013.

Zalzala Jazeera was not the first earthquake island to form in the area. Others appeared in 1945, 1999, 2001 and 2010. That area of the Indian Ocean is also known for its underwater mud volcanoes, which are common in subducting plate boundaries.

But the little islands tend to reach the surface only when there is a massive quake like the 7.7-magnitude disaster in 2013.

“This area of the world seems to see so many of these features because the geology is correct for their formation. You need a shallow, buried layer of pressurized gas – methane, carbon dioxide, or something else – and fluids,” Barnhart said in 2013. “When that layer becomes disturbed by seismic waves (like an earthquake), the gases and fluids become buoyant and rush to the surface, bringing the rock and mud with them.”

Massive earthquakes often bring changes to the landscape. A 7.8-magnitude quake near Kaikoura, New Zealand in November 2016 raised the seabed floor to create new coastal land and pulled some islands closer together. The 2015 Gorkha earthquake in Nepal actually changed the shape of the Earth’s crust in that region.

In this case, however, the new island was only temporary. Ocean waves have been eroding 2013 earthquake island since its formation, and it’s now entirely submerged, though it can still be seen below the water’s surface.