Scientists discover what the Easter Island stone heads may have meant • Earth.com 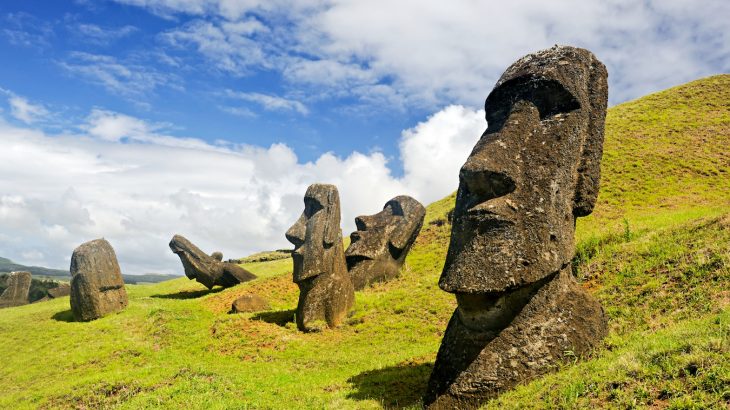 Scientists discover what the Easter Island stone heads may have meant

The enormous stone heads on Easter Island have puzzled scientists – and the general public – for years. Many conspiracy theories have been postulated for what purpose these heads may have served. Now, a new study may have just found the answer.

A team of archaeologists from Binghamton University and State University at New York believe that the ancient inhabitants of Rapa Nui (aka Easter Island) may have used the stone heads to mark sources of fresh water.  The researchers measured the salinity of coastal water around the island, and found areas close to heads’ locations near the coast that had a salt concentration low enough for humans to drink.

Coastal groundwater discharge makes it possible for humans to drink fresh water where it comes out near the coast of the island – although it may first appear to be too close to shore to be drinkable.

“‘Now that we know more about the location of freshwater, however, the location of these monuments and other features makes tremendous sense: they are positioned where freshwater is immediately available,” says Carl Lipo, a Binghamton University professor of anthropology.

There are accounts of Europeans first encounters with the island natives in the 18th century in which they are described to have drank seawater with no ill effects. But because the human body is unable to process seawater, the research team believes these accounts support their groundwater discharge theory.

“This information ultimately sheds light on the conditions that drove and enabled these communities to work together to achieve their feats of engineering,” says Lipo. “By gaining knowledge about community scale behavior, we can gain insights into the general conditions necessary for group-level cooperation – whether in the past or in contemporary society.”

Finding freshwater was extremely important to the lost civilization of Rapa Nui, as their society contained thousands of people, and the island quickly soaked up any rainfall. “The porous volcanic soils quickly absorb rain, resulting in a lack of streams and rivers,” explains Lipo. “Fortunately, water beneath the ground flows downhill and ultimately exits the ground directly at the point at which the porous subterranean rock meets the ocean. When tides are low, this results in the flow of freshwater directly into the sea. Humans can thus take advantage of these sources of freshwater by capturing the water at these points.”

According to the researchers, these points were important enough for the natives to build massive stone statues that indicated their location. And although that may seem like a whole lot of extra effort to us now, they couldn’t exactly turn on a faucet to get the water they needed.