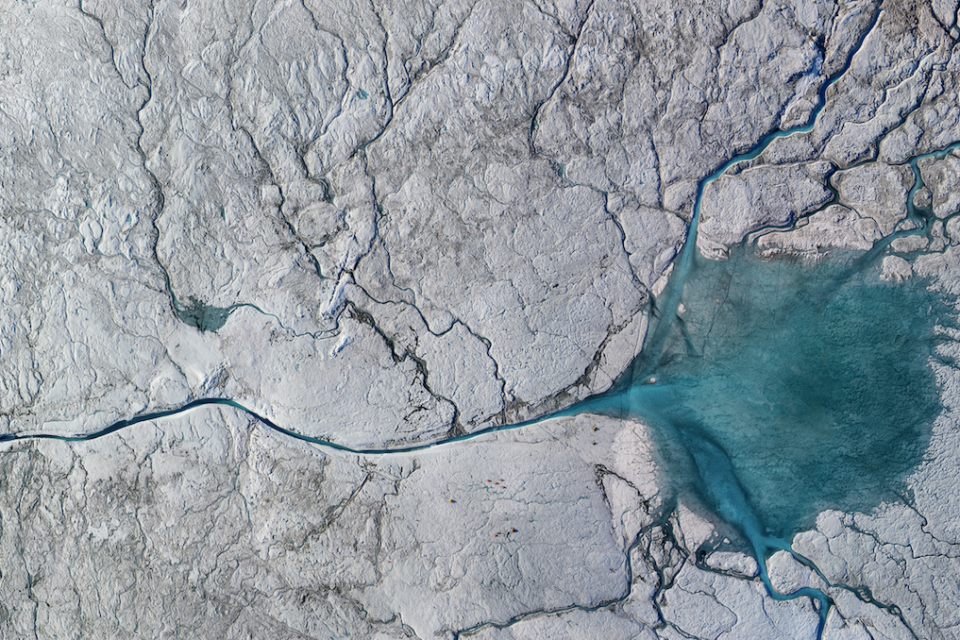 Contrary to what one might expect, melting polar ice that introduces fresh water into the sea will not lead to sea-level rises of equal magnitude throughout the world’s oceans. Instead, as an ice sheet melts, it leaves a unique pattern of meltwater distribution behind, known as a sea-level fingerprint. Although the concept of sea-level fingerprints has already been factored into current models used to predict future changes in sea level, actual observational measurements of the accuracy of these predictions have been difficult to make.

A new study, led by researchers from Los Alamos National Laboratory, has now used high-resolution satellite observations of the Earth’s high latitude areas to test model predictions and assess the risks of sea-level rise to coastal communities. The research takes a major step forward in predicting probable consequences of rising ocean levels by confirming the theoretical predictions and computational models that are used to forecast sea-level changes as the climate warms.

“Using sea-surface-height observations from satellites in the way we have done independently verifies observations of Arctic and Greenland ice-mass loss and allows us to tease apart contributions to global sea-level rise from individual ice sheets and glacier systems,” said Sophie Coulson, a postdoctoral researcher in fluid dynamics and geophysics at Los Alamos National Laboratory, and lead author on the paper.

“Accurately predicting regional patterns of sea-level change is absolutely central to understanding the impacts of future climate change and forecasting hazards,” she emphasized.

The theoretical models predict that sea level will actually fall in the immediate vicinity around a melting ice sheet. This is because ice sheets and glaciers have a small gravitational pull on the water that surrounds them and the strength of this force is related to the mass of the ice. As an ice sheet or glacier melts, it loses mass and therefore the gravitational pull it exerts on the nearby ocean water becomes weaker. This causes the sea level to fall.

In addition, as ice sheets melt, complex geological processes cause the surrounding seawater that is no longer attracted so strongly to the diminishing ice mass to move away towards oceans in the middle and low latitudes of the world. This means that sea levels are likely to rise faster in the tropical and subtropical regions, far away from the actual location of the ice sheet or glacier. For example, sea-level rise in California and Florida, generated by the melting of the Antarctic ice sheet, is predicted to be as much as 52 percent greater than average sea-level rise across the rest of the world.

“As this melting continues, and the water is redistributed around the global oceans, sea level does not rise uniformly,” explained Coulson. “And since every glacier and ice sheet has a unique pattern of sea-level change, these patterns have come to be known as sea-level fingerprints. But despite over half a century of research, these fingerprints have never been unambiguously detected.”

In the current study, Coulson’s search focused on satellite observations of sea-surface height in the oceans surrounding the Greenland ice sheet over the last three decades. The research team expected to see a lowering of sea level in waters around the ice sheet as it is melting and losing mass. Their models also predicted that progressively higher levels of sea rise would be recorded in oceans further away from Greenland, as the ocean water is freed from gravitational attraction to the ice sheet and heads out into the open ocean.

“We predicted what the pattern of sea-level change would be around Greenland using new estimates of ice melting in the area,” Coulson said. “When we then compared this pattern to satellite observations of sea-level change the fit was remarkable. It was an incredible eureka moment for us when the team saw it – ‘there it is, the sea-level fingerprint!’”

In the past it was not possible to detect sea-level fingerprints in the Arctic and Antarctic regions because the sea-surface-heights were not measured around polar ice sheets at these high latitudes. The research team on the Science paper took advantage of processed satellite observations that extend to much higher latitudes than previously possible, where the fingerprint signal is the largest. The team processed this satellite data using a powerful new technique to remove the variability due to ocean dynamics.

The new study confirms the accuracy of the geophysical predictions of sea-level change and adds confidence to projections of sea-level rise across the next decades and century. As Coulson says, “It’s a powerful and sensitive approach to monitoring ice sheets and glaciers in our warming world.”

The results of the analysis are published in the journal Science.