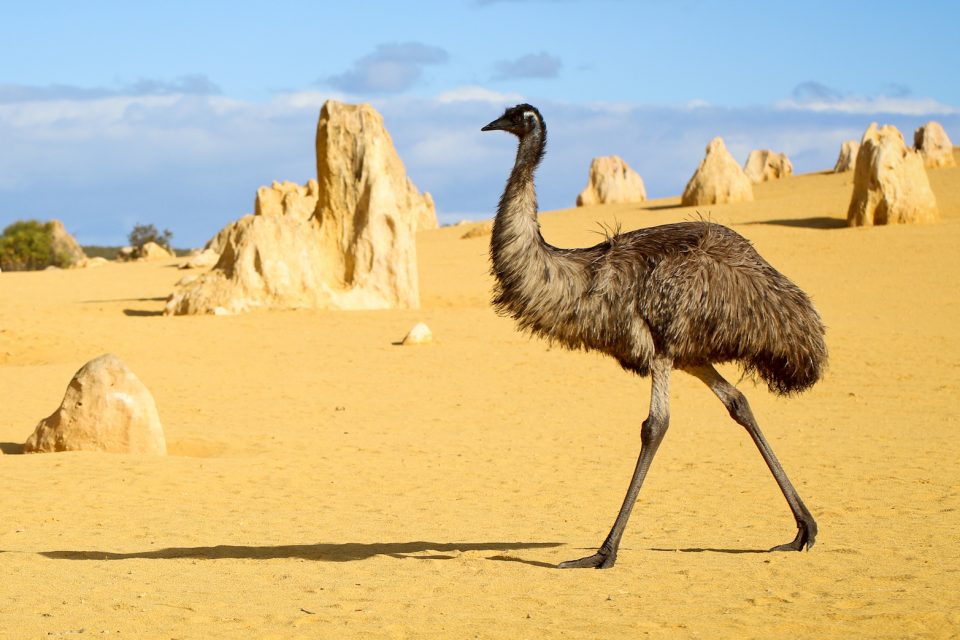 Recently, severe drought has struck parts of the already rather arid Australian outback and it’s having a noticeable impact on emus.

Emus (Dromaius novaehollandiae) are the second largest living bird by height in the world after the perhaps more famous ostrich.  Emus cover the whole of Australia, and once subspecies lived on Tasmania and King Island as well but were killed off quickly after European colonization.  Emus are flightless and reach towering heights (for birds) of up to 6.2 feet. The birds eat plants and insects and have been observed to fast for weeks when food isn’t available.  Quick, agile and strong, emus have managed to cohabitate with human hunters and dingoes for at least 40,000 years and retain healthy populations in Australia today.

Emus are native to Australia but they’ve also been raised in parts of the United States.  Some farmers in the US decided that raising the exotic bird for meat and eggs might be a way to make a good profit.  Largely speculative emu farming in the US was a failure. In 1998, The Chicago Tribune reported that Emu farming had peaked a few years before that, leading to some of the large birds being released.  An Emu in Harrisburg, Illinois disrupted traffic and was killed by the police to stop potential car accidents.

Emu meat is lower in cholesterol and fat than beef and so was embraced by a fickle health food trend.  Emu meat consumption and even use of its oil for therapy has declined and many farmers didn’t know what to do with the flightless Australian bird.

In the area of my own hometown of Grand Junction Colorado, I’ve seen a few emus, walking behind high fences and making an odd drum-like sound deep in their chests.  The birds look like nothing so much as dinosaurs on long scaly legs and fluffily feathered bodies. I know a commercial paleontologist who sells casts of an emu’s foot as a representation of what a theropod dinosaur foot may have looked like.  Many of the emus I’ve seen over the years in Western Colorado were said to have been turned out, much like the once farmed emus of Illinois. Some even speculate that the emus released into the desert may have found a way to establish small feral populations unseen by most in the rough canyon lands of the southwest.

Given the strength, speed, intelligence and size of the emu, it isn’t too surprising that there have been conflicts between them and humans in their homeland of Australia as well as the US.  In the wake of World War I, the Australian government hit on a plan to settle and occupy veterans returning from the Great War.

Military veterans were given plots of land in the dusty outback to turn into farms.  Scientific American reports that by 1920 the government had turned over 90,000 hectares of land to veterans for farming.  By that time, the Australian government was running out of good land and started giving veterans more marginal property near Perth.  The onset of the Great Depression and little experience in farming set the veterans up for failure and into the struggle stepped the emu.

Initially emus were a protected animal under Australian law.  Things changed when emus started eating wheat planted by the veterans turned farmers and seemed to be wreaking havoc on crops already planted in marginal land by the inexperienced.  Emus were (temporarily) reclassified as vermin, which anyone could legally kill. Quickly the situation escalated and things got nasty.

The farmers called on the Australian government to send in the military to cull the herds of emus, starting what would come to be called The Great Emu War.  Mostly the military’s efforts ended in failure. The emus proved smarter than people generally conceded. The birds seemed to learn how far away from machine guns they could stand safely out of range.  The emus coordinated with one bird reportedly watching out while the others fed and calling an alarm at any danger. The birds moved so quickly it was hard to shoot them with any accuracy. In the end it was estimated that it took 10 military bullets to kill a single emu during the ‘war’.  The military operation stopped and instead the government simply supplied guns and ammunition to locals for their own effort in emu control.

This year, a drought has hit parts of Australia particularly hard.  Financial Times reports that this is the driest beginning for the growing season since 1982 and the third driest on record in the state of New South Wales.  The drought has also hit Victoria, Queensland and parts of South Australia. In reaction to the drought, the federal government of Australia offered up a $2 billion aid package to help farmers and others affected.

As the world’s third largest beef exporter, Australia has been hit hard by the drought, their cattle herd expected to drop by almost 2 million head this year.  The wildlife which must compete with livestock for food and water has also been hurt by the drought.

Emus have once again begun competing with humans for land and resources.  The BBC reported that emus have wandered into Broken Hill and other towns in New South Wales and surrounding areas.  Emus have even been seen walking down main streets of rural communities. Some locals have left out food and water for the emus, others have merely been startled by their sudden appearance.  Emus have been seen crashing soccer games, eating from gardens and drinking any water available. In other areas kangaroos have been reported entering towns as well, searching for a means of survival.