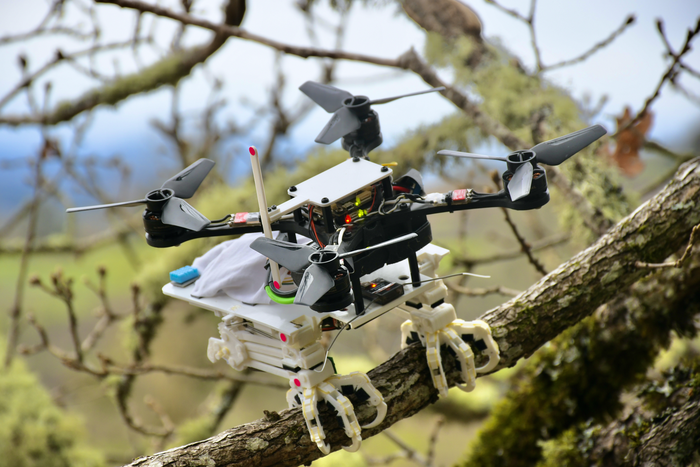 Even if no two branches are alike in nature, differing in size, shape, and texture, birds can easily land on most of them. A research team from Stanford University has recently developed a bird-inspired aerial robot, which they named SNAG (“stereotyped nature-inspired aerial grasper”), and can fly around, catch and carry different objects, and perch on various surfaces.

“It’s not easy to mimic how birds fly and perch,” said study lead author William Roderick, a mechanical engineer at Stanford. “After millions of years of evolution, they make takeoff and landing look so easy, even among all of the complexity and variability of the tree branches you would find in a forest.”

SNAG was inspired by the scientists’ previous studies of parrotlets (the second smallest parrot species), very small birds that could land on a variety of perches made of different materials including wood, foam, sandpaper, or Teflon. “What surprised us was that they did the same aerial maneuvers, no matter what surfaces they were landing on,” said Roderick. “They let the feet handle the variability and complexity of the surface texture itself.”

In designing SNAG, Roderick and his colleagues used a 3D-printed structure instead of bones, and motors and fishing-line stand-ins for muscles and tendons. Each leg had its own motor for moving back and forth and another one for grasping, allowing it to catch objects thrown by hand, and to perch on a large variety of surfaces.

Such robots can have many real-world applications, such as searching and rescuing, wildfire monitoring, and environmental research. For instance, the scientists attached a temperature and humidity sensor to the robot, and used it to record the microclimate in Oregon.

“Part of the underlying motivation of this work was to create tools that we can use to study the natural world,” explained Roderick. “If we could have a robot that could act like a bird, that could unlock completely new ways of studying the environment.”

Finally, this robot can also be used to better understand bird anatomy. For instance, the researchers ran the robot with two different toe arrangements – anisodactyl (three toes in front and one in back, as in the case of peregrine falcons) and zygodactyl (two toes in front and two in back, as in parrotlets), in order to learn more about the correlation between bird anatomy and behavior in different species.