The enormous hissing cockroaches of Madagascar are gentle giants • Earth.com 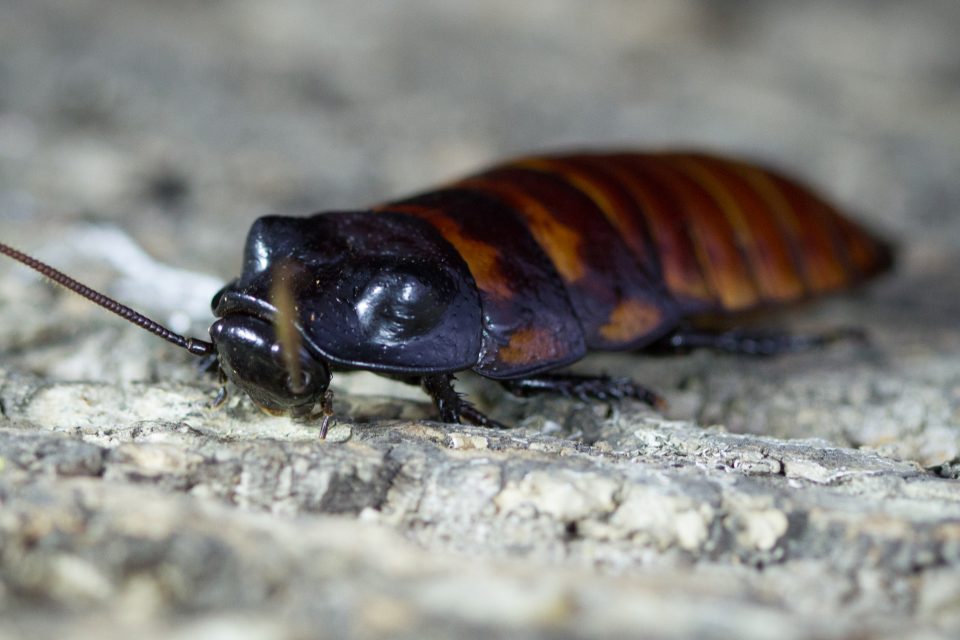 The enormous hissing cockroaches of Madagascar are gentle giants

Most people aren’t huge fans of cockroaches. And they’re certainly not a box office draw for all except the most devoted and stoic of entomologists. Nonetheless, Madagascar’s most notable silver screen export is in fact a roach. They’re the ultimate stand-ins.

The enormous hissing cockroach (Gromphadorhina portentosa) is frequently used as an onscreen substitute for the more-skittery and less-tractable American and German species that infest our homes. They can gather some speed themselves, but they’re nowhere near as zippy as the ones that scamper under our refrigerators when the lights are turned on. In fact, they’ve become a popular, low-maintenance exotic pet and educational animal.

Easily acclimated to human handling, they’re the perfect doubles for our more-pedestrian household pests, which of course are used onscreen to indicate squalor or, in the case of sci-fi films, to represent the true form of menacing bug-people. The next time you see a roach in your favorite TV show, take a closer look, if you can bear it: it’s mostly likely a Madagascar hisser.

In the forests of the African island to which they are native, these roaches live under fallen logs and among leaf litter, where they feast on fallen fruit, decaying vegetation, and occasionally animal carcasses. Females show a preference for higher-protein items, according to one study.

The menacing hisses for which they are known serve a number of purposes. There is an alarm hiss that warns other roaches approaching lemurs, birds, and reptiles that might eat them, special courting and mating hisses, and a hiss issued by males who are vying for territory and females. Females and nymphs are only capable of the alarm hiss.

While higher animals vocalize through the passage of air through their throats, most insects produce sound by stridulation (rubbing two body parts together) or vibration. Unusually, the terrifying hiss of Gromphadorhina is produced by passing air through modified spiracles, or breathing pores—making them more similar to vertebrates in this respect. Interestingly, these insects do not possess tympanums and instead hear through the subgenual organs in their legs. 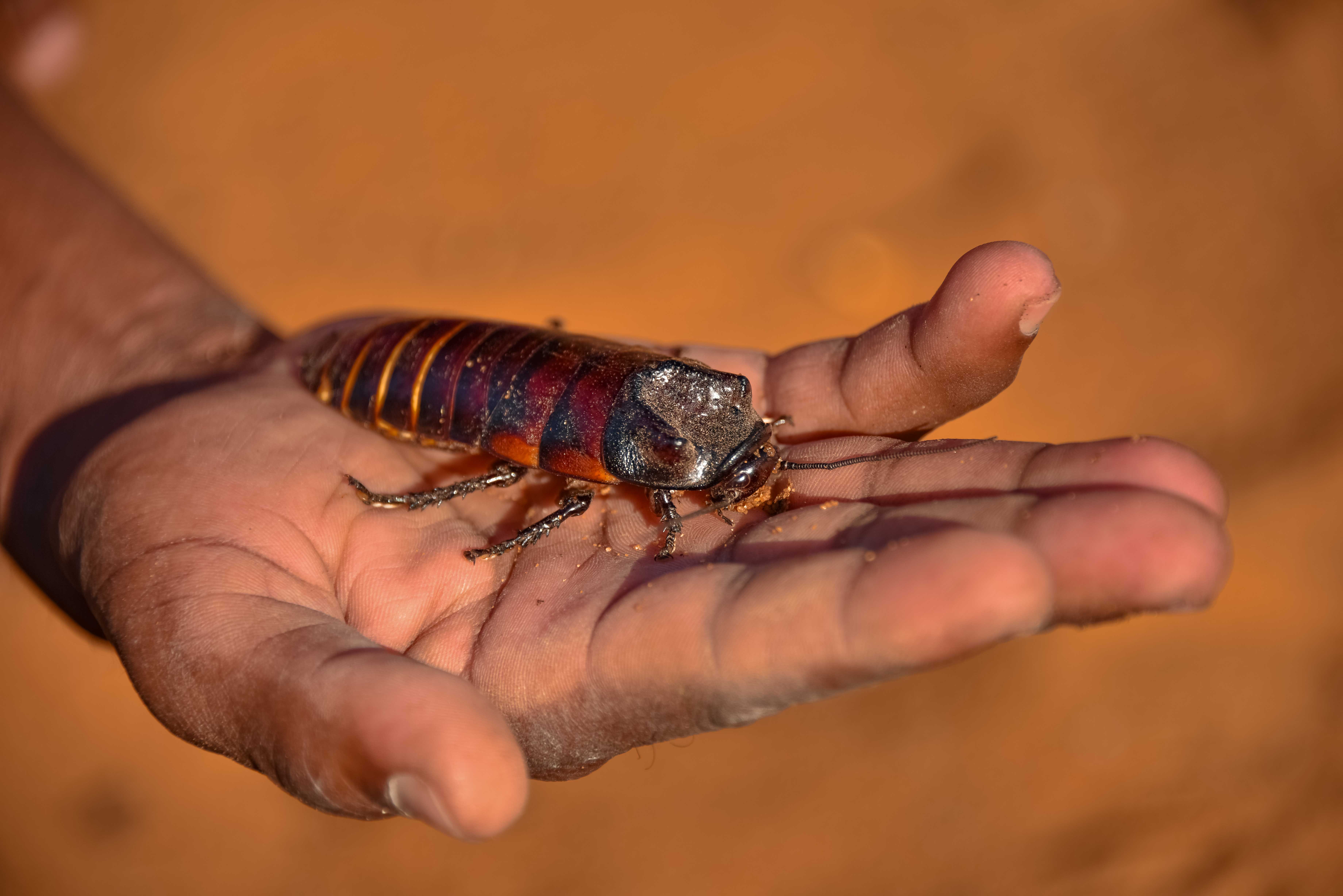 They don’t quite reach Gregor Samsa proportions but Madagascar hissing cockroaches typically range from 2-3 inches in length, making them among the largest of the roaches. The South American Megaloblatta longipennis and the Australian burrowing cockroach (Macropanesthia rhinoceros) both outsize it by about half an inch. Still, they’re intimidating to most who are even slightly entomophobic. With brownish-black armature and, in the case of males, pronotal horns that extend from the front segments of their bodies, they look like they’re ready to do damage.

In fact, they are capable of little if any aggression toward any but their own species. (Owners report that the sharp spines on their legs can draw blood. But they don’t bite, spray, or otherwise defend themselves.) However, males do engage in some fairly impressive conflicts when vying for harems of females. Though these contests don’t appear to result in much physical harm to the combatants, they involve a good deal of hissing and ramming using their horns, a behavior reminiscent of larger animals such as deer and mountain goats.

Dominance hierarchies are complex and likely result from a multitude of factors, including size. Larger males usually win, but interestingly, the strength of the hisses appears to correlate to genetic potential rather than current size. As part of their contests, males also engage in “stilting” or extending their legs to their full lengths in order to appear larger and more intimidating. One fascinating study found that predator exposure affected the boldness of subordinate males attempting to displace the dominant roaches in a group. Those who had faced more predatory risk (in this case, a scorpion) were less likely to attempt a coup.

The roaches live in loose groups of about 10 in the wild, showing little tendency to aggregate in laboratory experiments. Captive colonies can, however, quickly become much larger. Unusually, the females are ovoviviparous, unlike many other cockroaches. Rather than depositing their ooetheca on a surface—a distressing sign of cockroach infestation familiar to any apartment dweller who has been afflicted by their presence—the females instead carry the case inside their bodies for around two months until anywhere from 20 to 60 nymphs emerge. These tiny versions of the adults mature in around seven months.

Hissing cockroaches are host to a mutualistic species of mite, which is often viewed as a pest organism by pet owners. However, it turns out that these nasty-looking little critters actually aid the creatures in maintaining proper hygiene, assisting in the removal of food particles that might encourage fungal growth. This has important implications for husbandry: another study found that a number of molds grow on the creatures and their feces, causing allergies in some people. So, allowing the mites to remain on their hosts may actually keep allergens down.

Unfortunately, some people may be allergic to proteins produced by the roaches themselves. So, the allergy-prone would do well to exercise caution when handling or otherwise interacting with the roaches. (Pest roaches like the American and German species are well-known to produce substances that exacerbate allergies, so this is no surprise.) They are, luckily, unable to colonize human habitations due to their specialized food and moisture requirements, though owners whose roaches have escaped report that they can survive in your average home for a surprisingly long time.

In an appropriately sci-fi turn, these bizarre insects may have something to offer humanity aside from serving as a unique pet and boosting the market for Claritin. Attempts are underway to turn hissing cockroaches into so-called biobots—hybrid “living robots.” By electrically stimulating their antennae and cerci (essentially antennae protruding from the rear of the abdomen), researchers have been able to control the paths that the roaches take. This may have applications in search-and-rescue missions where attempting to find survivors is logistically insurmountable.

So, if you have the misfortune of being trapped beneath a collapsed building in a decade or so, don’t be surprised if the first friendly face you see is a roach wearing a camera and wiggling its antennae in your direction.