More states aim to crack down on environmental protesting • Earth.com 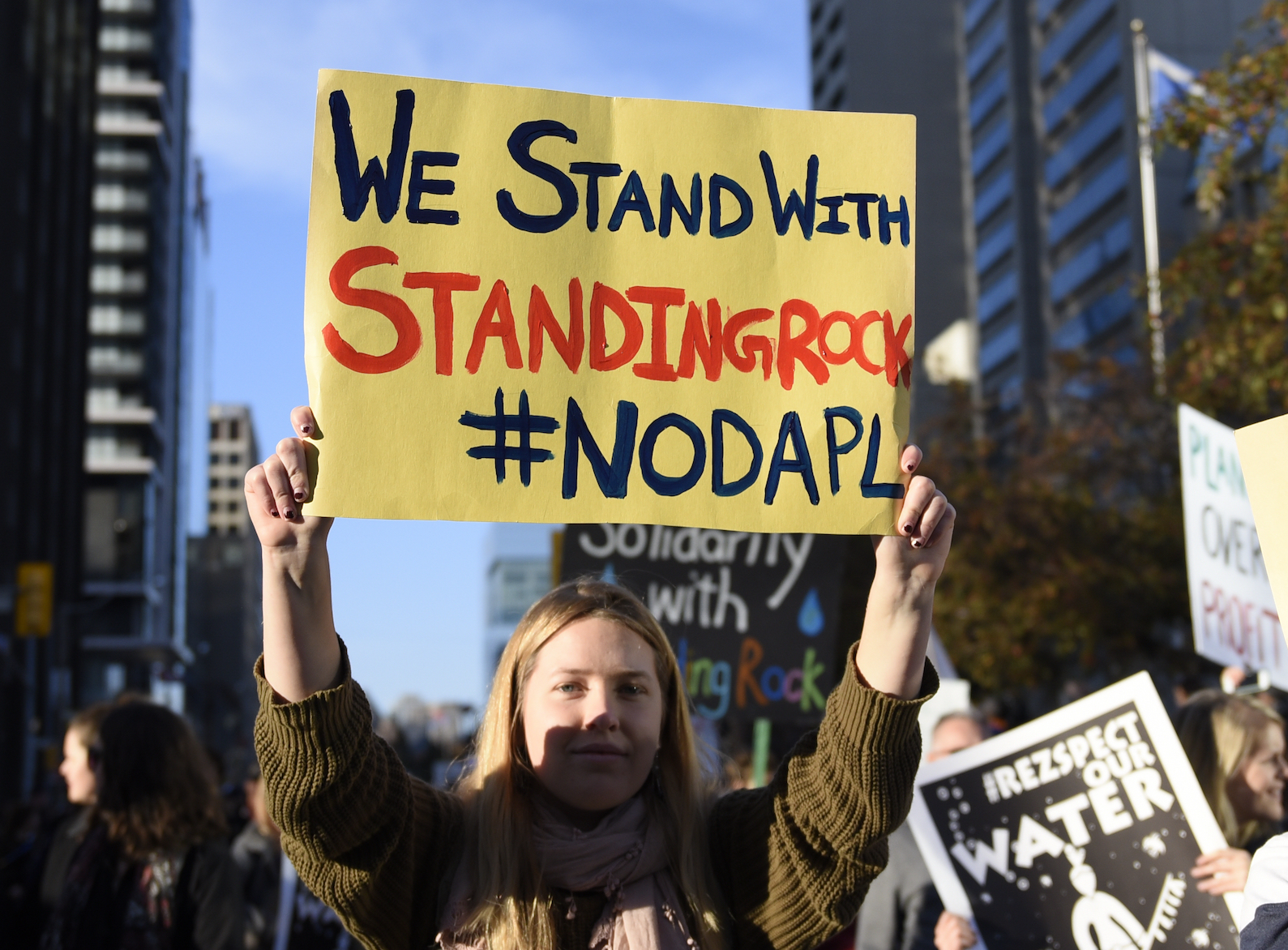 More states aim to crack down on environmental protesting

In recent years, North Dakota has become well known for pipeline protests on the Standing Rock Reservation.  The protests were set against the proposed Dakota Access Pipeline, part of the Bakken Pipeline Project, a 1,172 mile long underground pipeline project that is planned to carry oil from North Dakota south to Illinois.  The pipeline was designed to carry as much as 570,000 barrels of crude oil a day, and its route passes under a Missouri River reservoir known as Lake Oahe. The Missouri River is the primary source of water for the Standing Rock Sioux Tribe, with a population of about 10,000.

Beyond the immediate threat to clean drinking water, the pipeline also crossed land sacred to the Sioux.  Even though the pipeline isn’t on reservation land, the Standing Rock Sioux tribe argued that the government didn’t properly consult with them when awarding the permit, something required under the National Historic Preservation Act.

The clash between those of the Standing Rock Tribe, their supporters and those supporting the pipeline, including police forces got nasty.  Water cannons, tear gas and dogs were unleashed on protestors. Protestors claimed that some of the guard dogs bit them. Besides normal police forces, National Guard units and private security firms were engaged to push back against protestors, according to NPR.

The Standing Rock Tribe announced that construction crews demolished an area containing significant artifacts and sacred sites, yet construction continued.  The pipeline project was then halted under President Obama on grounds that it hadn’t considered the environmental impact fully.

But the project has been reauthorized under President Trump, and so the conflict between protestors and those building the pipeline backed by government forces is likely to continue.  According to The Guardian, government documents characterize protestors against pipelines as ‘extremists’ and warn about the potential for ‘terrorism’.  The government hysteria and reaction to these protests is reminiscent to the civil rights movements and federal government response to leaders such as Martin Luther King Jr.  In a similar way, the government is further criminalizing civil disobedience in pipeline protests.

In anticipation of upcoming protests, the state of South Dakota  has recently passed a bill threatening protestors. South Dakota also has a large population of Sioux tribal members culturally related to the Standing Rock tribe and the pipeline is planned to pass through South Dakota as well.  The Cheyenne River Sioux tribe has been opposed to the pipeline plans since they were first put forward in 2008, according to Inside Climate News.  Just south of Standing Rock, the tribe is also concerned about potential water contamination.

A bill first proposed by South Dakota governor Kristi Noem would allow the state to sue protestors as well as out of state financiers.  The bill, Senate Bill 189, calls such financial backers ‘riot boosters’ and protestors ‘rioters’.  The money gained from lawsuits filed against protestors and their backers would be used to fund construction of the pipeline as a further deterrent to protestors.  The bill is still pending but has received no strong political opposition and is expected to become law. As environmental issues become more and more pressing, protesting may become more prevalent.  We should expect as in this case that those profiting from environmental destruction will continue to oppose civil disobedience with whatever means available.

Other states are gearing up to face down protestors as well.  The Keystone XL pipeline is planned to eventually connect with the Dakota Access project, significantly extending the total pipeline length.  In Montana, police are already monitoring social media posts that are anti-pipeline as terrorism threats, according to The Guardian.  In August 2017, Montana Petroleum Association also hosted a panel on “environmental activism” which included several law enforcement officers.

Protestors in other states the pipeline would affect directly, including Nebraska, have already mobilized.  According to the National Lawyers Guild, laws are being created to crack down on many of these protests or potential protests across the country.  These laws would extend beyond just pipeline protests to any number of other acts of civil disobedience for any cause including civil rights.

In February 2018, the National Lawyers Guild said that conservative led anti-protest bills introduced had already doubled compared to the entire previous year.  The bills jumped from 25 proposed in 19 states to 58 bills in 31 states. Nine bills were introduced in the first two months of 2018 alone. According to the National Lawyers Guild, many of these new bills were written based on model policies created by American Legislative Exchange Council (ALEC) and the Goldwater Institute (both of which are funded by the Koch network).  The Koch brothers behind the Koch Network of course have deep connections to the oil industry.  The chilling part is that the trend of cracking down on protesting seems to be the new normal.

President Trump has long tweeted angrily about NFL players kneeling during the national anthem to protest police violence against black men and women.  Last September in an interview on The Daily Caller, Trump questioned why protests should be allowed at all.  The president said,

“I think it’s embarrassing for the country to allow protesters, you don’t even know which side the protesters were on…But to allow someone to stand up and scream from the top of their lungs and nobody does anything about it is frankly — I think it’s an embarrassment.”

Ostensibly, the government is supposed to uphold our constitutional rights.  The president is charged with upholding the constitution, which allows the freedom of expression, including dissent.  With the spread of environmental activism, including the global phenomena of climate change protests, will the government respond by silencing activists instead of working to resolve environmental crises?