EPA: Colorado Mine Spill Could Take Decades To Clean Up • Earth.com 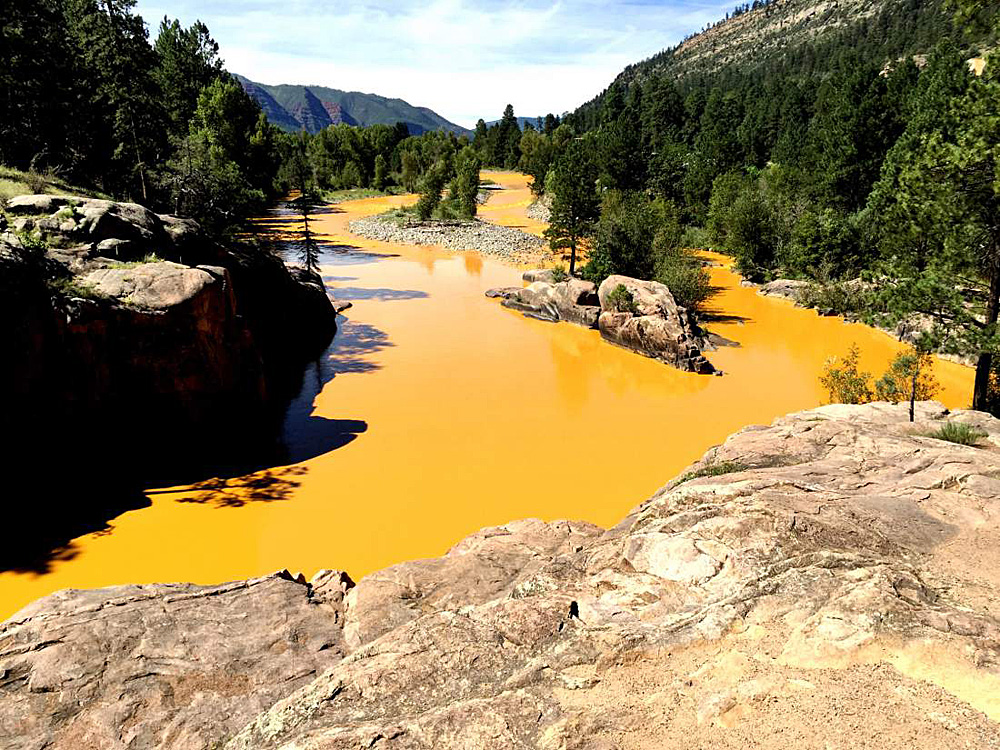 EPA: Colorado Mine Spill Could Take Decades To Clean Up

Townspeople affected by the millions of gallons of waste spilled from an abandoned gold mine and now flowing through their communities demanded clarity Tuesday about any long-term threats to their water supply.

Colorado and New Mexico made disaster declarations for stretches of the Animas and San Juan rivers and the Navajo Nation declared an emergency as the waste from the Colorado mine spill spread more than 100 miles downstream, where it will reach Lake Powell in Utah sometime this week.

EPA workers accidentally unleashed an estimated 3 million gallons of orange-yellow waste, including high concentrations of arsenic, lead and other potentially toxic heavy metals, while inspecting the long-abandoned Gold King mine near Silverton, Colorado, on Aug. 5.

EPA Administrator Gina McCarthy, who plans to tour the damage personally, said Tuesday in Washington, D.C., that she takes full responsibility for the spill, which she said “pains me to no end.” She said the agency is working around the clock to assess the environmental impact.

EPA officials said the shockingly bright plume has already dissipated and that the leading edge of the contamination cannot be seen in the downstream stretches of the San Juan River or Lake Powell.

So far, the Bureau of Reclamation has no plans to slow flows on the lower Colorado River, below Lake Powell, where the water is a vital resource for parts of California, Arizona, Nevada, New Mexico and Utah.

Chris Watt, a bureau spokesman in Salt Lake City, said his agency is testing the water at the request of the EPA, and can’t discuss the impact without learning the results.

None of this has eased concerns or quelled anger among people in the arid Southwest who depend on this water for their survival.

“Decades. That is totally, completely unsettling,” Begaye said. “This is a huge issue. This river, the San Juan, is our lifeline, not only in a spiritual sense but also it’s an economic base that sustains the people that live along the river. You’re taking away the livelihood and maybe taking it away from them for decades. … That is just, to me, a disaster of a huge proportion. And we have yet to hear from the Obama administration.”

Heavy metals from Gold King and other defunct mines in Colorado have been leaching out and killing fish and other species for decades as rain and snowmelt spills from mining operations left abandoned and exposed. The EPA has considered making part of the Animas River in Colorado a Superfund site for a quarter-century.

It would have provided more resources for a cleanup, but some in Colorado opposed Superfund status, fearing the stigma and the federal strings attached, so the EPA agreed to allow local officials to lead cleanup efforts instead.

Now the Attorneys General of Utah, New Mexico and Colorado are coordinating a response to ensure “whatever remediation is necessary occurs as quickly as possible,” Utah Attorney General Sean Reyes said in a statement.

Utah Gov. Gary Herbert expressed disappointment with the EPA’s initial handling of the spill, but said the state has no plans for legal action. New Mexico Gov. Susana Martinez, however, said she would not take anything off the table and that the EPA should be held to the same standards as industry.

“Right now we have people preparing for a lawsuit if that is what we need to do,” she said Tuesday.

Colorado Gov. John Hickenlooper, himself a former geologist, visited a contaminated stretch of river Tuesday and said he hopes a “silver lining” to the disaster will be a more aggressive state and federal effort to deal with mining’s “legacy of pollution” across the West.

The EPA has said the current flows too fast for the contaminants to pose an immediate health threat, and that the heavy metals will likely be diluted over time so that they don’t pose a longer-term threat, either.

Still, as a precautionary measure, the agency said stretches of the rivers would be closed for drinking water, recreation and other uses at least through Aug. 17.

Dissolved iron is what turned the waste plume an alarming orange-yellow, a color familiar to old-time miners who call it “yellow boy.”

“The water appears worse aesthetically than it actually is, in terms of health,” said Ron Cohen, a civil and environmental engineering professor at the Colorado School of Mines.

Tests show some of the metals have settled to the bottom and would dissolve only if conditions became acidic, which Cohen said isn’t likely. He advises leaving the metals where they settle, and counting on next spring’s mountain snowmelt to dilute them more and flush them downstream.

No die-off of wildlife along the river has been detected. Federal officials say all but one of a test batch of fingerling trout deliberately exposed to the water survived over the weekend.

As a precaution, state and federal officials ordered public water systems to turn off intake valves as the plume passes. Boaters and fishing groups have been told to avoid affected stretches of the Animas and San Juan rivers, which are usually crowded with rafters and anglers in a normal summer.

Farmers also have been forced to stop irrigating, endangering their crops, and recreational businesses report losing thousands of dollars.

“We had lots of trips booked. Right now we’re just canceling by the day,” said Drew Beezley, co-owner of 4 Corners Whitewater in Durango, Colorado. He said his dozen employees are out of work, and he’s lost about $10,000 in business since the spill.

“We don’t really know what the future holds yet,” said Beezley. “We don’t know if the rest of this season is just scrapped.”