Wall of fans can suck carbon out of the air for a reasonable price • Earth.com 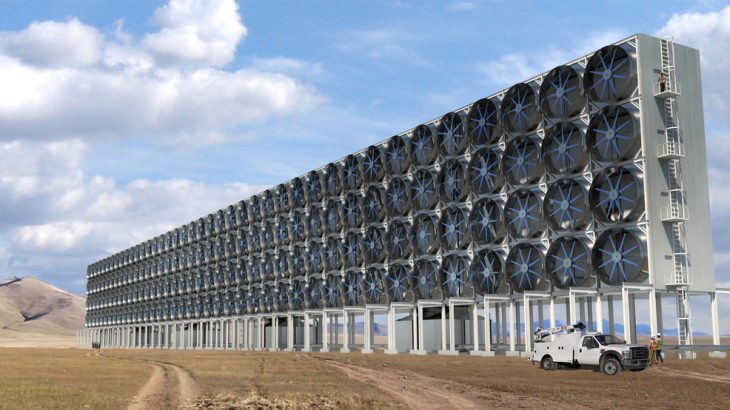 To limit warming to 1.5 degrees Celsius above pre-industrial levels will require a massive effort to curb greenhouse gas emissions worldwide and effective methods to capture carbon from the atmosphere.

Current carbon capture and storage methods involve scrubbing CO2 from power plants and storing it deep below the Earth.

Carbon capture and storage is costly for coal and other power plants, but it also does nothing for the carbon already emitted into the atmosphere or the emissions from cars and planes.

An obvious solution to help solve the carbon crisis might be to plant more trees, but the globe just doesn’t have enough land for forests to make that a possibility.

The amount of land and trees required to combat today’s current emissions would mean taking over viable agricultural land in a world where increasing food demands are a top concern.

Not only could the carbon fans be placed anywhere to capture emissions, but the carbon captured would also be turned to carbonate and could be used again for fuel. This would start a sustainable process of emitting carbon, capturing it, storing, turning it into fuel where it will again be emitted.

The company now has the backing of Bill Gates, but the question is will the costs make it feasible for a wide scale.

A study published in the journal Joule earlier this year found that the that the costs of operating such technology would be between $94 and $232 per ton.

This is well below previous cost estimates of around $600 per ton, which had been calculated by David Keith, a founder of Carbon Engineering and Harvard University professor.

Because the carbon capture technology harvests carbon for fuel that can be used to power planes and cars, it could make fuel as cheap as a dollar a liter, according to Keith.

Direct carbon capture promises to be a viable solution for removing carbon from the atmosphere and could be a crucial part of limiting emissions and mitigating climate change.