Fascinating frogs found in Mexico are the size of a thumbnail • Earth.com 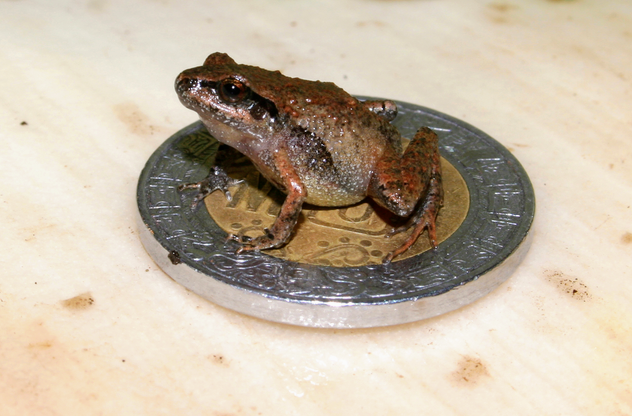 Fascinating frogs found in Mexico are the size of a thumbnail

Experts have discovered six new species of tiny frogs in Mexico, including one that is now officially the country’s smallest frog. The frogs are only about the size of a thumbnail when they are fully grown.

Among the tiniest of the species – a frog named Craugastor candelariensis – the adult males grow to only 13 millimeters in length.

The new species are “direct-developing” frogs, which means that rather than hatching from eggs into tadpoles, they emerge from the eggs as perfect miniature frogs. The experts explained that their tiny size puts the frogs at the very bottom of the forest food chain.

The study was led by Tom Jameson, a researcher in the Department of Zoology at the University of Cambridge.

“With millions of these frogs living in the leaf litter, we think they’re likely to play a hugely important role in the ecosystem as a source of food for everything else, from lizards to predatory birds,” said Jameson.

“Until now these new species have gone unnoticed because they’re small and brown and look really similar to other frogs.”

“Their lifestyle is utterly fascinating. These frogs live in the dark, humid leaf litter of the forests, which is like a secret world – we don’t really know anything about what goes on there. We don’t understand their behaviour, how they socialise, or how they breed.”

The researchers collected almost 500 Mexican frog specimens from museums around the world. They used DNA sequencing to confirm the six distinctive species.

“Frogs in the group known as Craugastor are very difficult to tell apart, so scientists have long suspected that more species may exist. We’re really excited to have discovered six new Craugastor species that are completely new to science,” said Jameson.

“We chose the name cueyatl to honor the rich human history of the Valley of Mexico, and the local people who have probably known these frogs far longer than we have,” said Jameson.

The frogs are possibly what is known as “micro-endemics” because they may occur only in one small area.

“We named Craugastor rubinus after the garnet mines in the hillside where they’re found,” said Jameson. “Sadly, it will only take the expansion of one mine and these frogs could be gone.”

“These frogs potentially play a really important role in the forest ecosystem. We need to make sure that they don’t just get wiped off the map because no-one even knows they’re there.”

The study is published in the journal Herpetological Monographs.