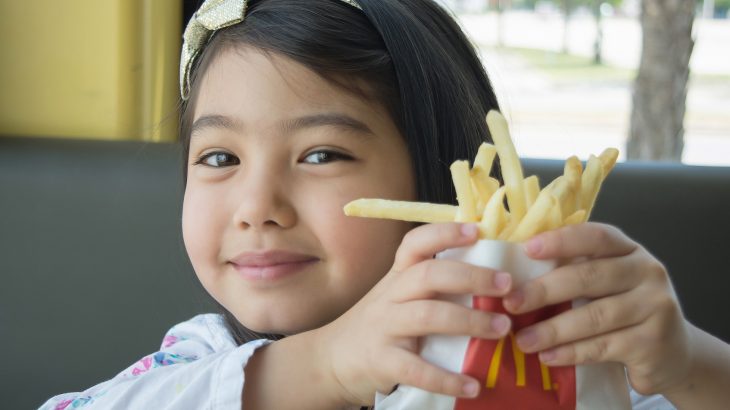 Because of the epidemic of childhood obesity in the United States, many fast-food restaurants have committed to offering healthier options for kids’ meals. But despite this commitment, a new study of parents’ fast food restaurant purchases has found that 74 percent of kids still get unhealthy drinks and/or side items with their kids’ meals at the four largest restaurant chains: McDonald’s, Burger King, Wendy’s, and Subway.

This new report from the Rudd Center for Food Policy and Obesity at the University of Connecticut has found that parents continue to give their kids unhealthy options, as many restaurants still provide sugary sodas and French fries with their kids’ meals. Researchers also found that these places widely promote unhealthy options inside the restaurants on menu boards and sides, while heathier sides and drinks are barely promoted.

“While most fast-food restaurants do have healthier kids’ meal drinks and sides available, many do little to make parents aware of the healthier options or to encourage parents to choose the healthier options instead of unhealthy ones,” says Jennifer Harris, Director of Marketing Initiatives for the UConn Rudd Center, and lead author of the report. “If restaurants are serious about children’s health, they will make the healthiest choice the easiest choice for parents and the most appealing choice for children.”

The comprehensive study surveyed roughly 800 parents in 2010, 2013, and 2016 – asking what they ordered for their 2- to 11-year-old children in the past week from one of the top four fast food restaurants. Since 2010, these chains have pledged to offer healthier drinks and side options for kids’ meals, and not list sugary soda as a kids’ meal option on menu boards. A prior study from the same institution done in 2016 found a significant variation in how well some restaurant locations implemented these changes.

Equally concerning, the study also reports that children are eating fast food more often. In 2016, over 90 percent of parents reported purchasing lunch or dinner for their child in the past week at one of the four largest chains – an increase of almost 80 percent since 2010.

“We know that fast food offers parents a convenient, affordable option for feeding their families. But restaurants have a responsibility to make these affordable, convenient foods healthier,” suggests Harris. “Most fast-food meals – even kids’ meals – have more fat, sugar, and sodium than children need, and eating this kind of unhealthy food can have negative health consequences over time, such as obesity, diabetes, heart disease, and other health issues.”

The authors suggest that restaurants should automatically provide healthy drinks and sides as default choices with kids’ meals, and indicate that there is a need for regulations that would mandate these policies.

“Fast-food restaurants have said they want to be part of the solution to childhood obesity,” Harris says. “They can start by making the healthier drinks and sides the default options in kids’ meals and introducing healthier kids’ meal main dishes, which remain high in fat, sodium, and calories.”