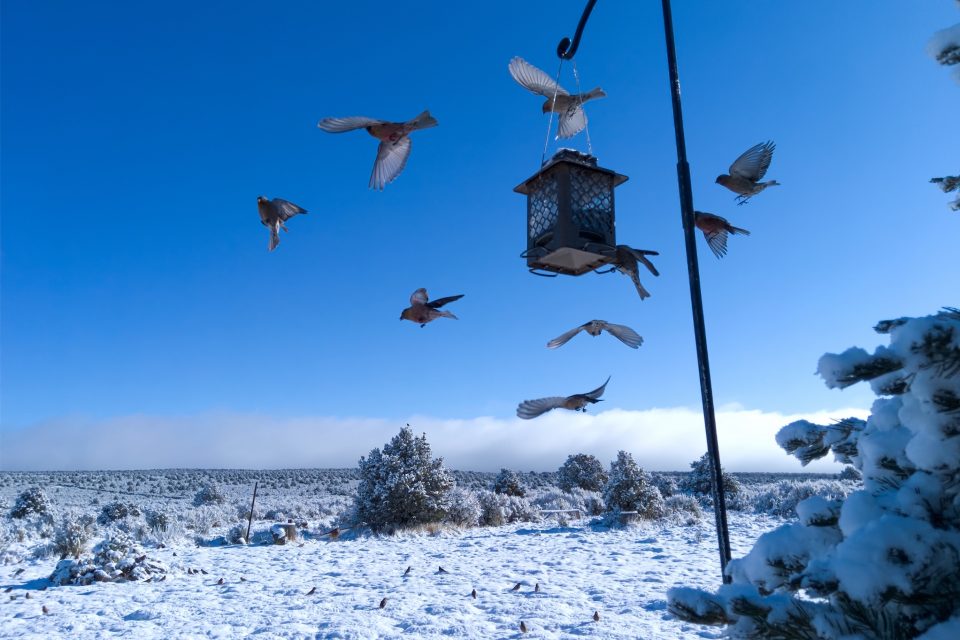 In a 1933 radio talk, famed naturalist Aldo Leopold proclaimed, “Winter feeding is the most effective kind of conservation. One feeding station is worth a dozen sermons on the love of nature.” Indeed, observing birds up close is a fantastic way of appreciating the natural world and the idea that providing them with food during the winter is essential to their survival appeals to the conservationist mindset.

However, beginning in the 1980s, some began to question the wisdom of this attitude. Were we actually helping the birds by provisioning them through the harsh winter months? Or were we unintentionally hurting them, perhaps creating a dependency that had unforeseen negative effects?

It remains an important question, considering the ubiquity of feeding wild birds as a pastime and as a conservation measure. A 2016 survey by the U.S. Fish and Wildlife Service estimated that some 59.1 million people in the United States fed birds and other wildlife. Other estimates have claimed that as many as 50% of Americans feed the birds. In the United Kingdom, some 75% of the population may do so and in Australia, perhaps 57%. This has given rise to a multi-billion dollar industry in seed, feeders, and other supplies. The effects of this practice, whatever they might be, are substantial.

Ultimately, the answer appears to be that feeding birds, when done properly, is actually quite helpful, especially in the winter. A 2014 meta-analysis of some 82 studies indicated that providing birds with supplementary foods has a net positive effect. Egg laying by birds with access to feeders is typically moved up and overall breeding success is increased.

An oft-cited study noted the improved survival of black-capped chickadees (Poecile atricapillus) provided with access to feeders during the winters of 1982-85 at Devil’s Lake State Park in Wisconsin. Of the chickadees who visited feeders, 69% survived the winter. Of the chickadees who subsisted on naturally foraged foods alone, only 37% survived. Interestingly, the authors observed that the birds who perished died as a result of a number of brief cold snaps, suggesting that supplementary food provided by humans allows birds to build additional energy stores, allowing them to persevere during weather that makes foraging difficult. Additionally, the study noted that only 20% of the chickadees’ diet came from the feeders, negating the idea that feeding inherently creates unsustainable dependencies.

A number of studies, however, have added a cautionary note to such conclusions. Survival is one thing. But there may be more diffuse effects at play. Studies of blue tits (Cyanistes caeruleus) in the United Kingdom indicated that tits who were fed during the winter were less successful breeders in the following season. The birds produced fewer eggs and the eggs they did produce had smaller yolks. (Vitamin E supplementation appeared to correct the latter deficiency.) The tits fledged fewer chicks, and fewer fledglings survived. Though the reasons for this were unclear, the authors postulated that a diet too high in fat may have played a role and that supplementary feeding may have allowed sub-prime individuals that might otherwise have died to survive the winter and reproduce.

Despite such findings, most experts still claim that responsible bird feeding is beneficial. Proper feeder hygiene is particularly important. Improperly sanitized feeders have been known to spread disease. Otherwise disparate populations and species of bird congregate at feeders, increasing the chance that pathogens will spread between them. Outbreaks of avian pox, aspergillosis, coccidiosis, salmonellosis, and trichomoniasis have all been traced back to dirty feeders. 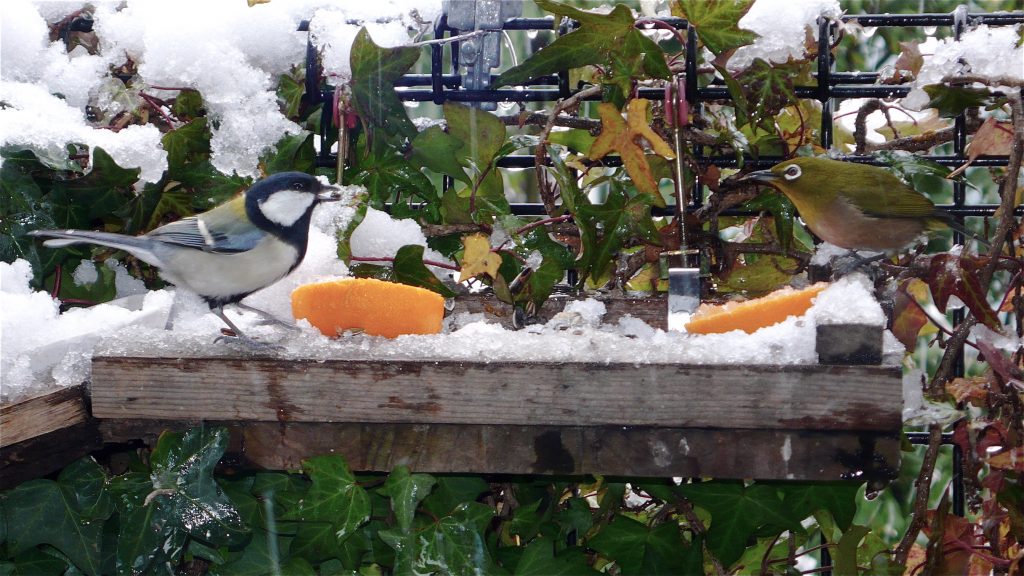 It is suggested that feeders be cleaned with a 10% solution of non-chlorinated bleach every few weeks to neutralize disease-causing organisms and kill any mold that may have formed. Additionally, the areas beneath feeders should be raked periodically to avoid the build-up of excess seed and droppings. Ground feeding birds may be exposed to disease while they are picking through seed contaminated with feces. It may be best to avoid ground feeding—spreading seed on the ground—entirely.

Additionally, it is helpful to set up several different feeders, with different types of seed that appeal to specific species. By establishing stations for a narrower range of species, the chances of transmission of disease across species are reduced. And certain types of seed, such as millet, which appeal to invasives such as house sparrows and starlings, can be eliminated, thus cutting down competition from these aggressive feeders.

Further steps can be taken to reduce the deleterious effects of feeding as well. Placing feeders no more than 10 feet away from sheltering vegetation can help to cut down on predation by opportunistic sharp-shinned and Cooper’s hawks who may stake them out. Such predation, though, is entirely natural and most scientists do not believe that occasional kills by hawks at feeders make a significant dent in songbird populations. Putting feeders close to windows—perhaps 3 feet away—may cut down on window collisions. Birds will aim at the feeder and if they do take off toward the window, they will be less likely to be harmed by the impact at such a short distance. Hanging fine mesh in front of windows further mitigates the risk.

So, it seems, that for once, popular impulses actually have a positive effect on wildlife. A few easy steps can make feeding birds during the winter a sustainable and guilt-free conservation measure.