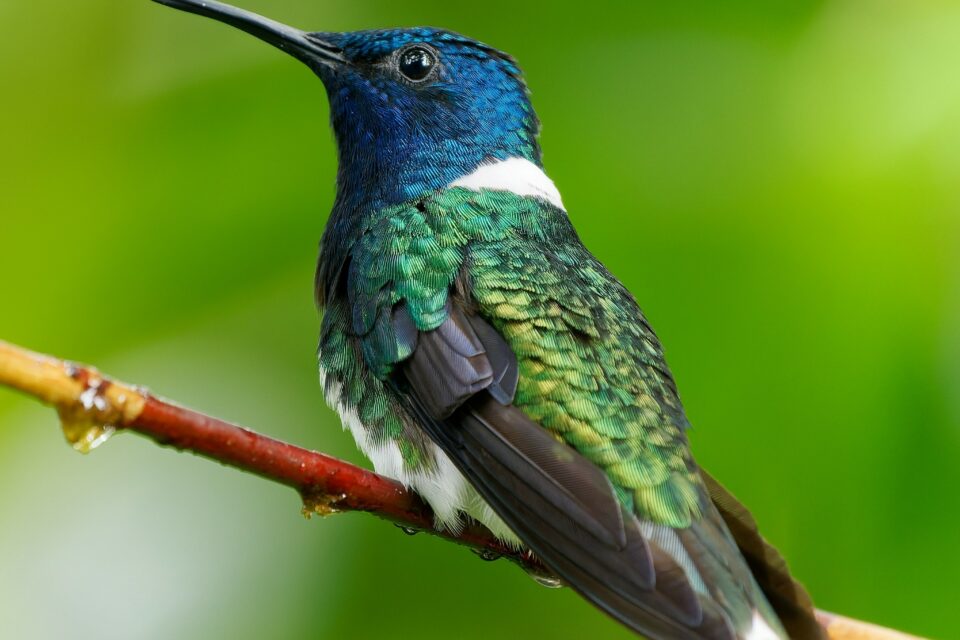 White-necked jacobins are a charming species of hummingbird common to neotropical lowlands and cloud forests. When they’re juveniles, the birds all sport tri-color plumage with blue heads, green backs and white bellies. As the birds become adults, their coloration changes.

A new study published in the journal Proceedings of the Royal Society B has explored the mystery of why some females look like males. Do the females colored like males act like them, and is there a benefit to their appearance?

Male white-necked jacobins are aggressive and territorial but the researchers saw none of this behavior among the females with male plumage. Males and females also exhibit different feeding behaviors. Males tend to hang around a few feeding spots for long times while females, regardless of plumage type, visit more feeding locations for briefer intervals.

“Females with male-like plumage don’t seem to be behaving any differently than other females. All evidence instead indicates that females that look like males are engaging in deceptive mimicry,’ said study lead author Jay Falk, a postdoctoral researcher at University of Washington.

Beyond observing behaviors, Falk and other scientists measured the birds and found no difference between the average size of females with different plumage. The results showed that both were slightly smaller than males.

The researchers also measured the birds’ strength by testing their ability to lift a small chain of beads while flying. Both types of females had the same strength on average, while males could lift more weight.

One possible benefit of the mimicry is that females that look like males experience less aggression than other females. In a previous study published in Current Biology, Falk and colleagues showed that females with male-like coloration were able to spend longer periods eating at feeders.

Going forward, the team wants to look at the genetics of the birds to see what differences there may be and how these changes have evolved. There are some reports that different species of hummingbirds might display the same mimicry, which means it may be more common than we know.