Deadly firenado in Carr Fire caused by a perfect storm of factors • Earth.com 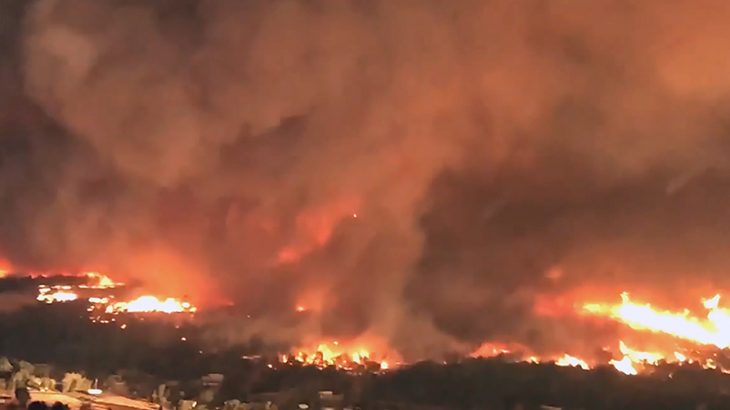 The Carr Fire caused widespread devastation in Redding, California in July 2018, and was the seventh most destructive wildfire in California’s history.

Eight people lost their lives in the fire, and over 200,000 acres were destroyed.

The Carr Fire was accelerated by a massive “firenado” or fire-generated vortex that towered 17,000 feet above the Earth and had the same spinning power as a class three tornado.

In a new paper, atmospheric scientist Neil Lareau discovered the perfect combination of factors that created the catalyst for the fire vortex, a rarely observed phenomenon in wildfires.

The only other documented case of a firenado was in 2003 during the Canberra Firestorm in Australia.

It was a matter of being in the right place at the right time, according to Lareau’s research, the findings of which were published in the journal Geophysical Research Letters.

“This paints a clear picture of the sequence of events leading to the vortex development and intensification,” said Lareau. “This sequence suggests the Carr Fire vortex may qualify as pyro-genetic tornado, and not merely a tornado-strength fire-generated vortex.”

Laureau reviewed satellite and radar data from the National Weather Service NEXRAD radars. This is the first time that NEXRAD radars captured the development and structure of the fire vortex which provided key insights into how the vortex formed.

The radar data revealed that the vortex was formed along the perimeter of the Carr Fire and within a region of wind shear.

A vertical plume of convective heat grew from four to eight miles high in 15 minutes. The plume’s growth was driven by the sudden formation of a pyro-cumulonimbus cloud which is an ice-topped cloud generated by a fire.

In this case, the cloud was 39,000 feet in the air which helped columns of air underneath the cloud stretch and rotate eventually forming wind speeds of 143 miles per hour in a concentrated area near the surface of the Earth.

An unusually warm and dry July along with low atmospheric pressure and wind shear that developed before the vortex all created the perfect catalysts for the firenado, according to Lareau.

“With the impacts from this fire, a discussion and studies are warranted about the potential to warn for future tornado-strength vortices,” said Lareau. “In this case, the availability of high-resolution radar and satellite observations provide advance indications for vortex formation such that watches, or even warnings, may have been possible.”