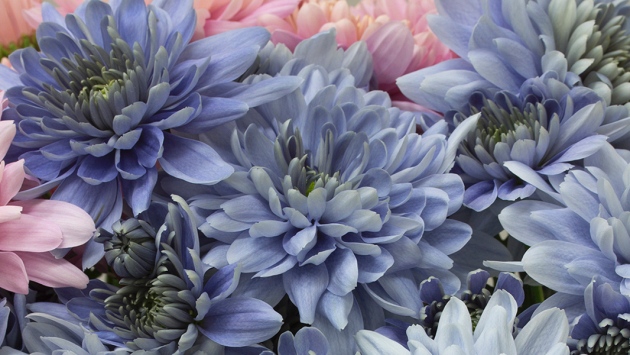 Japanese scientists have created the world’s first blue chrysanthemums. After 13 years of research, the team had a breakthrough when they combined the DNA of three plants.

The chrysanthemums are the first to be verified as true blue by The Royal Horticulture Society. Many other flowers that appear to be blue are actually various shades of violet or purple.

“Chrysanthemums are the second best-selling cut flowers after roses in the world,” said lead author Naonobu Noda. “Our blue chrysanthemums have a novel and natural blue color, which has been confirmed as true blue.”

“This is a flower with three parents in effect, coming from the chrysanthemum, butterfly pea and Canterbury bell, which was very difficult and time-consuming to create,” said Noda. “This technique could be applied to other plants not possessing blue flower cultivars, for example roses and dahlias.”

Guy Barter is the chief horticulturalist at the Royal Horticultural Society.

“This is a really interesting scientific breakthrough, especially given that previous attempts to create true blue flowers have not been terribly successful,” said Barter. “True blue flowers are actually pretty rare and we know there is an enthusiastic market for them, as there is for black flowers.”

Surveys suggest blue flowers are strongly preferred by gardeners. While the chrysanthemums will not likely pass the blue color through their seeds, clippings will allow them to be multiplied.

“In the EU currently, genetically modified plants require special permission to be grown, so at the moment we are not going to see blue chrysanthemums in garden centres,” added Barter. “Nonetheless this could provide new options for perfectionist gardeners looking for flowers which are blue rather than violet or lavender.”

The experiment is published in the journal Scientific Advances by the National Agriculture and Food Research Organization in Japan.