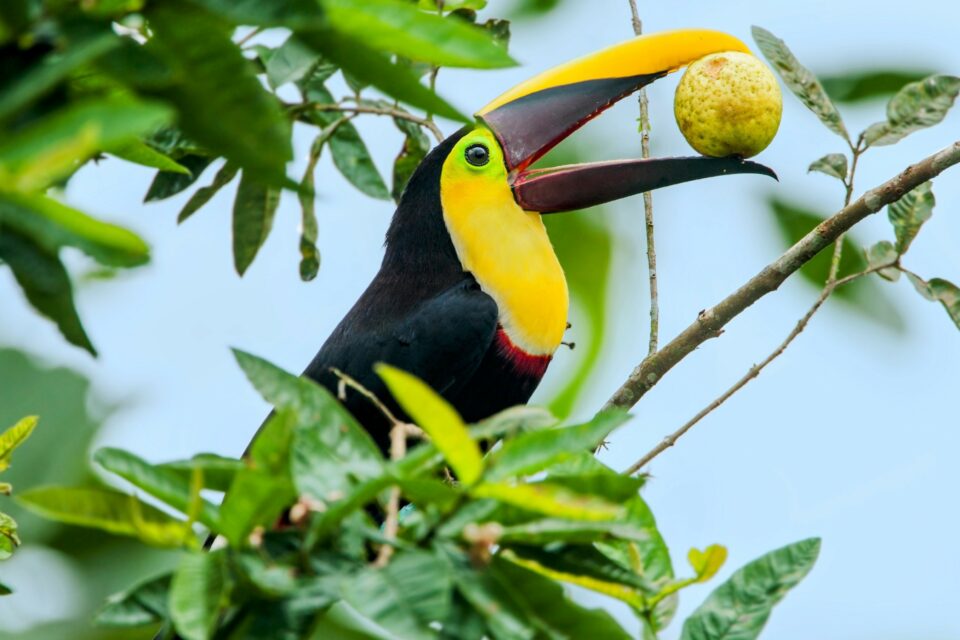 A large variety of animal species eat fruit – from toucans and fruit bats to maned wolves and humans. However, most fruit-bearing plants evolved relatively recent in our planet’s history, during the Cretaceous Period (145.5 to 65.5 million years ago). Now, by comparing the skull shapes and stomach contents of fossil birds, a research team led by the University of Oxford has tracked down the first fossil evidence of fruit consumption. They found that the earliest-known fruit-eating animal was a long-tailed, raven-sized bird called Jeholornis, which lived 120 million years ago. According to the experts, this bird may have helped contribute to the spread of plants that dominate the world today.

“This is the oldest evidence of fruit-eating in any animal,” said study co-author Jingmai O’Connor, an associate curator of fossil reptiles at the Field Museum in Chicago. “Fruits are an incredible resource that everybody’s familiar with, and the plants that produce them are everywhere, but it wasn’t always that way. This discovery about how and when birds started exploiting this resource could help explain why these kinds of plants are so dominant in our landscape today.”

According to O’Connor, the fist Jeholornis fossil – described in 2002 – had plant remains scattered around it, as if they exploded out of its stomach cavity. At the beginning, researchers thought these were only seed and argued that the bird was feeding on seeds, rather than whole fruits. However, by examining dozens of Jeholornis specimens preserved at the Shandong Tianyu Museum of Nature in China, the scientists discovered that, although the birds had more traits similar to dinosaurs than to modern birds, some features of their mouths and beaks – such as reduced teeth – could potentially hint at a “modern” diet including fruit.

Moreover, since birds which eat seeds have a “gastric mill” consisting of gizzard stones in their stomachs – which they ingest to help them crush seeds – the researchers examined also the stomach cavities of the fossils. The analysis revealed that, while some Jeholornis had gizzard stones, and others preserved seed in their stomachs, no specimen with both of these features was found. This suggests that the bird was eating different types of foods at different times of the year, including fruits when available. “Birds can drastically change the proportions of their digestive system to adapt to whatever their diet is for a particular season,” O’Connor explained. “This is the first evidence of that plasticity in dinosaurs.”

Thus, not only was Jeholornis the first known fruit-eating animal, but it may also have contributed to the evolution of the first fruit-producing plants. “Birds may have been recruited for seed dispersal during their earliest evolutionary stages,” said study lead author Han Hu, an expert in Paleobiology at Oxford. “As highly-mobile seed dispersers, early frugivorous birds might therefore indicate a potential role of bird-plant interactions during the Cretaceous Terrestrial Revolution.”

“Our research will hopefully inspire the research of paleontologists, ecologists, zoologists, and botanists who are interested in bird ecology, trophic interactions, and the Cretaceous Terrestrial Revolution,” she concluded.