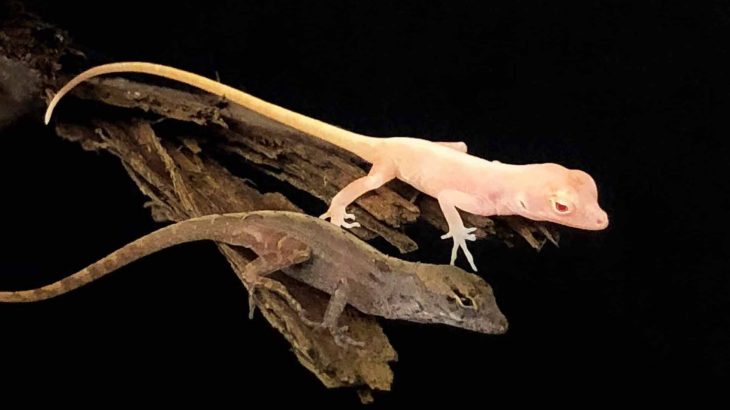 For the first time, four lizards have been genetically modified using the CRISPR-Cas9 gene editing tool.

Researchers from the University of Georgia (UGA) were able to target the pigmentation genes of Anolis sagrei lizards to create four albino offspring.

This feat is particularly noteworthy because reptile embryos are very difficult to manipulate and work with given their soft shells and difficult to pinpoint fertilization.

“Reptiles are very understudied in terms of their reproductive biology and embryonic development,” said Douglas Menke, the leader of the study. “There are no good methods to manipulate embryos like we can easily do with mammals, fish or amphibians. To our knowledge, no other lab in the world has produced a genetically altered reptile.”

But the researchers were able to overcome these challenges and microinject CRISPR proteins into multiple immature eggs or oocytes located in the ovaries of 21 Anolis lizards.

The team specifically targeted the tyrosinase gene and successfully injected the gene editing solution into 146 oocytes.

After just four weeks, four albino lizard offspring hatched from their eggs, and the team’s efforts paid off.

“When I saw our first albino hatchling, it was truly awe inspiring,” said Ashley Rasys, the first author on the study. “I’m most excited about the possibility of expanding this approach into many other reptilian model systems, effectively opening the doorway for future functional studies.”

Albinism is a trait inherited from both parents and in this study, the researchers found that the CRISPR protein targeted the tyrosinase protein from both the mother and father of the offspring which means that the CRISPR solution was active long after fertilization.

“That was a surprise,” said Menke. “It enabled us to see the functional requirements of the gene without having to breed mutated animals to produce offspring who inherit the mutated gene from both parents. It’s a big time-saver.”

The researchers say that the results of their study, now submitted for peer-review, could have far-reaching implications for future gene-editing research and also human genetics as the tyrosinase gene is necessary for some aspects of eye development.