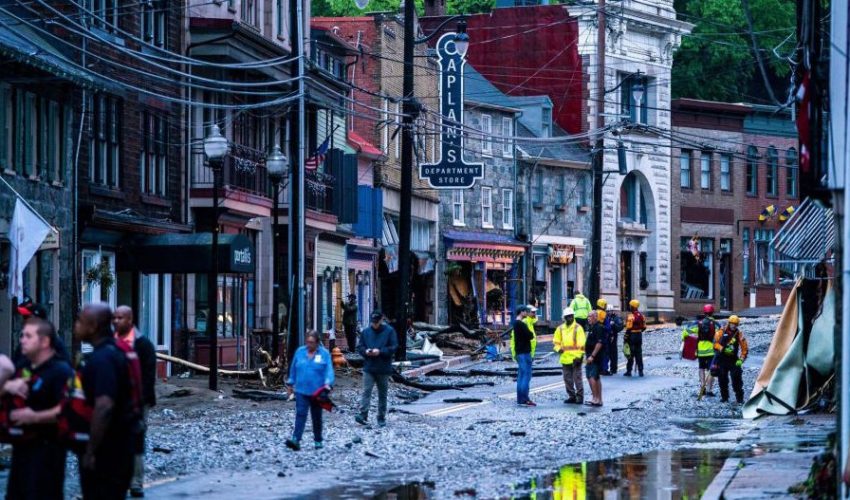 Residents of Ellicott City, Maryland, found themselves in a desperate situation on Sunday when over six inches of rain fell in just two hours and triggered catastrophic flash flooding.

The town’s historic Main Street was transformed into a powerful river that tossed around cars and debris. The brown water ripped through shops and restaurants, rising above the first floor of some buildings.

People scrambled to reach higher ground in the flooded buildings, where many were forced to spend the night before being rescued Monday morning.

Unfortunately, flooding is not an unfamiliar sight in the small Howard County community, located about 12 miles west of Baltimore. The people and businesses of Ellicott City were still recovering from a devastating flood that also came out of nowhere in July of 2016.

Today’s survey of the damage has revealed that the intensity of this year’s flooding is worse compared to that of 2016, but there have been no confirmed casualties. There is a search underway, however, for missing National Guard member Eddison Hermond, who was reportedly swept away by the force of the water while helping to rescue others.

Nick Johnson owns a furniture store in downtown Ellicott City. He saw videos and photos of the destructive floodwaters on social media yesterday, and said that he was surprised to see people reposting images from 2016. He was soon shocked to realize that this was not footage from two years ago, but that the flooding was happening again.

“We don’t know the extent of the damage except that it’s far worse than it was two years ago,” Johnson told The Weather Channel.

According to the National Weather Service, the nearby Patapsco River swelled up by 17.8 feet during the slow-moving storms. The river, which is a major waterway that feeds into the Chesapeake Bay, hit a record 24.1 feet on Sunday.

Howard County Executive Allan Kittleman said that there are no words to describe the devastation.

Kittleman told CNN: “There are a lot of people whose lives are going to be devastated again, and they’ve been working so hard to come back and we just need to be there for them and to tell them … all of our resources are there to help them.”

Experts say that this is the second time in two years that Ellicott City has experienced a 1000-year flood, which has only a 0.1 percent chance of happening in any given year.

Dangerous flash flooding remains a threat for regions of Florida, Georgia, Tennessee, and the Carolinas as Subtropical Storm Alberto moves in, and some areas could receive as much as a foot of rain.