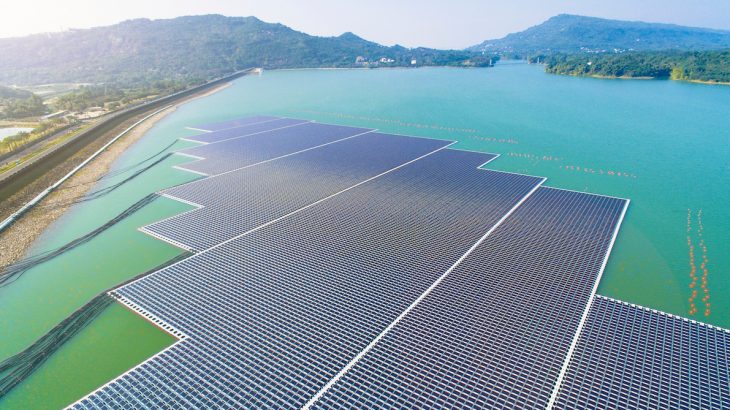 Scientists from Norway and Switzerland have conceptualized a new technique to drastically reduce the need for fossil fuels while offsetting harmful greenhouse gas emissions. The team suggests that a network of millions of floating solar farms could be used to convert atmospheric carbon dioxide into renewable energy.

“A massive reduction in CO2 emissions from fossil fuel burning is required to limit the extent of global warming. However, carbon-based liquid fuels will in the foreseeable future continue to be important energy storage media,” wrote the study authors. “We propose a combination of largely existing technologies to use solar energy to recycle atmospheric CO2 into a liquid fuel.”

“Our concept is clusters of marine-based floating islands, on which photovoltaic cells convert sunlight into electrical energy to produce H2 and to extract CO2 from seawater, where it is in equilibrium with the atmosphere. These gases are then reacted to form the energy carrier methanol, which is conveniently shipped to the end consumer.”

According to Newsweek, study co-author Andreas Borgschultehat explained that one of the biggest challenges with renewable energy is making it competitive with fossil fuels on a large scale.

Borgschultehat said the idea for the solar islands was conceived when the Norwegian researchers were assigned the task of pushing fish farms out to open sea that would require their own energy. “Energy ‘producing’ islands had been proposed some time ago,” he told Newsweek. “What remained was to include energy storage.”

The researchers determined that 70 of these artificial islands could make up a single facility that covers an area of about 0.4 square miles. The experts identified locations across the globe where conditions are suitable to properly manage the facilities. The coasts of South America, Australia, and Southeast Asia were found to be ideal sites for the solar farms.

“Humankind must cease CO2 emissions from fossil fuel burning if dangerous climate change is to be avoided,” wrote the study authors. “However, liquid carbon-based energy carriers are often without practical alternatives for vital mobility applications. The recycling of atmospheric CO2 into synthetic fuels, using renewable energy, offers an energy concept with no net CO2 emission.”

The team is now working to build prototypes of the floating islands.