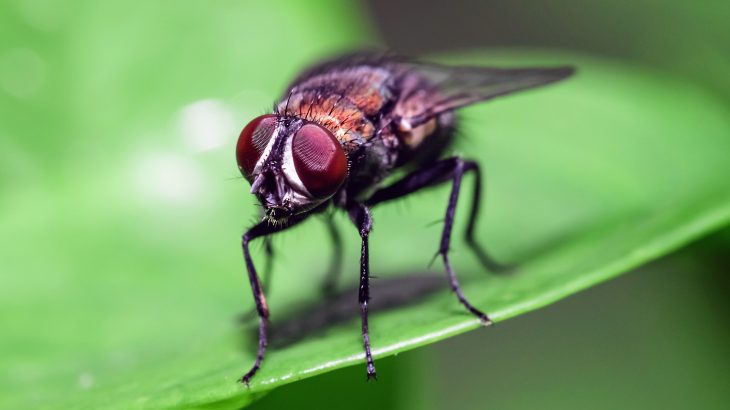 Around five percent of flowering plants use a “deceptive pollination strategy” that involves advertising a false reward to attract pollinators. In a new study published by Frontiers, experts have discovered a flower that emits the smell of decomposing insects to imprison coffin flies.

The plant Aristolochia microstoma uses its unique trick to deceive flies from the genus Megaselia, who search for insect corpses to mate over and lay their eggs in. The coffin flies are tricked into entering a flower, imprisoned for a time, and then released unharmed.

Study co-author Professor Stefan Dötterl is the head of the plant ecology group and the Botanical Gardens at the Paris-Lodron University of Salzburg, Austria.

“Here we show that the flowers of A. microstoma emit an unusual mix of volatiles that includes alkylpyrazines, which are otherwise rarely produced by flowering plants,” said Professor Dötterl.

“Our results suggest that this is the first known case of a flower that tricks pollinators by smelling like dead and rotting insects rather than vertebrate carrion.”

Deceptive pollination strategies work because pollinators are poor at distinguishing between the reward and the mimic, noted the researchers. These strategies are quite common in orchids, but have also evolved in other plants.

“Aristolochia contains over 550 species around the world, especially in the tropics and subtropics. They are mostly woody vines and herbaceous perennials with striking, complex flowers that temporarily imprison their visitors to get pollinated,” said study co-author Professor Christoph Neinhuis.

Upon entering an Aristolochia flower, the coffin flies are guided by hairs to a small chamber which holds the sex organs. While trapped inside, they deposit any pollen they carry on the female organs. Next, the stamens ripen and release more pollen.

“Many Aristolochia species are known to attract flies with floral scents, for example mimicking the smell of carrion or feces of mammals, decaying plants, or fungi,” said study first author Thomas Rupp.

“But our curiosity was piqued by A. microstoma, a species known only from Greece: unlike other Aristolochia with their showy flowers, A. microstoma has inconspicuous brownish flowers that lie horizontally, partly buried or close to the ground among leaf litter or rocks. The flowers release an unpleasant, carrion-like smell, noticeable to people at a short distance.”

The researchers analyzed A. microstoma plants from three sites in Greece. They identified 16 scent compounds including oligosulfides, which are produced by many plant species who rely on carrion flies for pollination.

Another compound is one that is known in nature to occur in decomposing beetles and in the urine of rodents. This indicates that A. microstoma mimics an unusual fake reward to attract specific pollinators.

“Earlier studies had suggested that A. microstoma might be pollinated by leaf litter-dwelling insects such as ants, because of the orientation and position of the flowers. But here we show that this isn’t correct: instead, the main pollinators are Megaselia ‘coffin flies,'” said Professor Dötterl.

“As their name suggests, these flies feed on carrion, on which they lay their eggs and which serves as food for the larvae, which is why they are often used as evidence in forensic medicine.”

“We show A. microstoma flowers emit a simple but highly unusual mix of scents that includes 2,5-dimethylpyrazine, a molecule that occurs neither in vertebrate carcasses nor in feces, but does occur in dead beetles,” said study co-author Professor Stefan Wanke.

“We conclude that A. microstoma likely uses a strategy that has never been reported before: its flowers mimic the smell of invertebrate carrion to attract and imprison pollinators.”