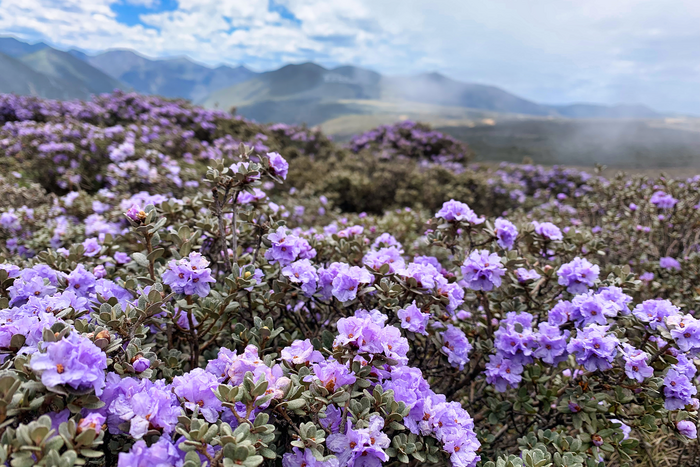 During evolution, when there are limited resources available, plants and animals often compete for nutrients, mates, and habitats. This makes the flower-covered meadows of China’s Hengduan mountains an evolutionary mystery, sporting dozens of species of closely-related rhododendrons – a family of flowering shrubs – which all live in harmony. Now, a team of scientists led by the Field Museum in Chicago has found that these plants are able to co-exist because they burst into bloom at different times of the season, and thus, don’t have to compete for pollinators.

“There’s this basic idea in ecology of the niche, that a species’ lifestyle, like what it eats and how it fits into the environment, cannot be replicated in the same community. If two species with the same lifestyle are living in the same space, they’ll compete with each other, so either one or both of them will adapt to have different, non-overlapping lifestyles, or they’ll go extinct,” explained study lead author Rick Ree, a curator at the Field Museum. “Since there are so many closely-related species of rhododendrons all living together in these mountains, we wanted to figure out how they were able to co-exist.”

According to Ree, the rhododendron diversity in this area is partly caused by speciation – the divergence of new ecologically-similar species from a common ancestor. This process, however, would theoretically increase the likelihood that the various species will need to compete with one another. Thus, in order to survive, they need to adapt so they can co-exist, by using different strategies.

“They can become very different in terms of their preferences for soil, light, and moisture, very basic physiological functional traits,” Ree said. “They can also evolve differences to reduce this potential for cross pollination or competing for pollinators. That would be manifested through differences in flower shape, size, or color, or could be manifested in when they make their flowers available for pollinators. By partitioning that timeline, they can reduce their chances of wasting their pollen and the resources that go into reproduction.”

By examining over 100 sites in the Hengduan mountains four times throughout the season, the scientists discovered that the key factor in allowing these plants to co-exist was that they all flower at different times. Unfortunately, while this strategy allows them to survive and share resources, it also makes the highly sensitive to climate change.

“There’s abundant evidence that the pace of climate change is messing with plants’ flowering times, causing population declines and extinctions. The question is, how are plant communities around the globe going to respond? Weather is part of what signals them to blossom, and since climate change affects the weather, it’s likely to shift that competitive landscape. When the environment changes, species have three choices: you move, you adapt, or you die. Climate change is accelerating that dynamic,” Ree concluded.