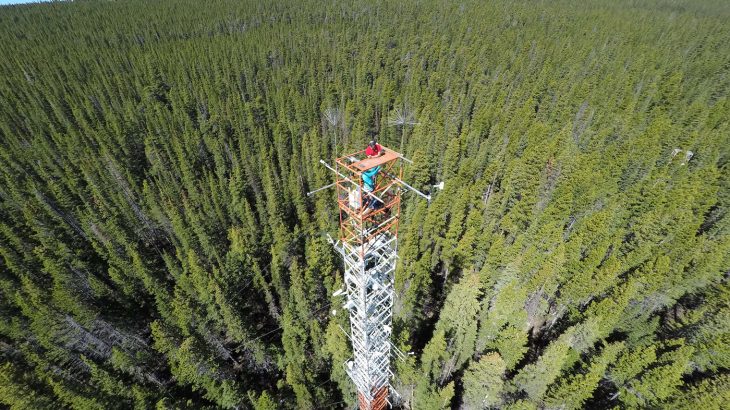 Satellites are becoming increasingly important in how we monitor the Earth’s climate, greenhouse gas emissions, water levels, cloud cover, and even photosynthesis.

In the first study of its kind, researchers from the University of Utah have found a way to monitor GPP and photosynthesis in evergreen forests using satellites.

Forests can store large amounts of carbon and so monitoring photosynthesis is an accurate way for researchers to track global carbon levels and measure how much CO2 is being stored.

The total amount of chemical energy produced by the process of photosynthesis is called Gross Primary Production (GPP), and for deciduous forests, satellites can easily track GPP because of the seasonal changes that impact leaf growth and color.

In the spring and summer, deciduous trees see a spike in chlorophyll in their leaves in preparation for photosynthesis. In the fall and winter, chlorophyll levels drop, and trees lose their leaves.

For evergreen trees which remain green all year round, it’s challenging to measure photosynthesis and carbon uptake.

In the new study, published in the journal Proceedings of the National Academy of Sciences, researchers found a way to use solar-induced fluorescence (SIF) emitted by evergreen trees to monitor seasonal changes in photosynthesis and GPP.

SIF occurs when chlorophyll levels return from a dormant state, and a photon is emitted which produces a faint “glow” not visible to the naked eye.

Satellites can now detect SIF glow, and the researchers used scanning spectrometers to measure SIF in an evergreen forest in Colorado.

The team found that fluorescence was a reliable indicator of seasonal chlorophyll changes matching the same patterns found in deciduous forests.

Having a way to monitor GPP in both evergreen and deciduous forests will help researchers understand how climate change is impacting forests over a large scale.

“Ultimately, measuring the small fluorescent glow from plants will allow us to see exactly timing and magnitude of carbon uptake from the terrestrial biosphere. This will help us understand how forests are responding to climate change and suggest how they might respond to future climate change,” said Troy Magney, research scientist of the NASA Jet Propulsion Laboratory and a lead author of the study.