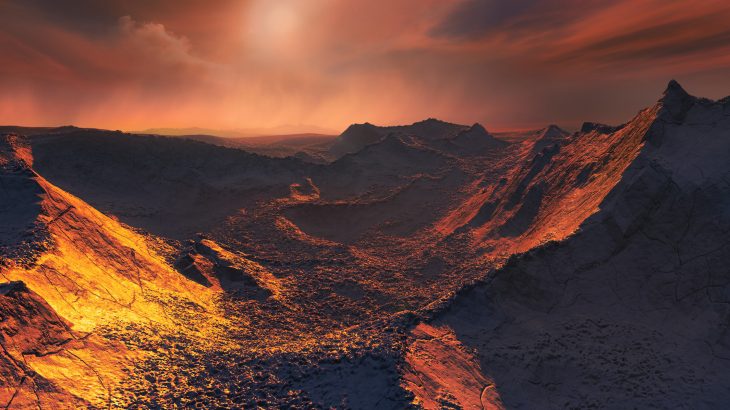 An international team of experts has discovered a frozen Super-Earth orbiting Barnard’s star, the closest single star to our Sun. The team, which included five astronomers from the Carnegie Institute for Science, “stitched” together 20 years of data from seven different instruments to produce one of the largest datasets for this particular planet detection technique.

“After a very careful analysis, we are over 99 percent confident that the planet is there,” said study lead author Ignasi Ribas of Spain’s Institute of Space Studies of Catalonia. “However, we’ll continue to observe this fast-moving star to exclude possible, but improbable, natural variations of the stellar brightness which could masquerade as a planet.”

Located six light-years from Earth, Barnard’s star is our fourth-closest neighboring star. It is smaller and older than the Sun, and is one of the least active of the red dwarfs.

The planet, which has been named Barnard’s star b, has at least 3.2 times Earth’s mass and orbits its star every 233 days at a distance where water would be frozen. The astronomers estimate that the planet has a surface temperature of -150 degrees Celsius.

This is the first time that a planet this small and distant from its star has been detected using the radial velocity technique, a method which assumes that not only does a star’s gravity influence the planet orbiting it, but the planet’s gravity also affects the star. Using sophisticated instruments such as Carnegie’s Planet Finding Spectrograph, the scientists can detect tiny wobbles that the planet’s gravity causes in the star’s orbit.

“This technique has been used to find hundreds of planets,” said study co-author Paul Butler. “We now have decades of archival data at our disposal. The precision of new measurements continues to improve, opening the doors to new parameters of space, such as Super-Earth planets in cool orbits like Barnard’s star b.”

According to the researchers, the distinctive characteristics of the newly-discovered planet make it an ideal target for direct imaging using the next generation of instruments such as NASA’s Wide Field Infrared Survey Telescope (WFIRST).