Surprising amount of frozen water found beneath the surface of Mars • Earth.com 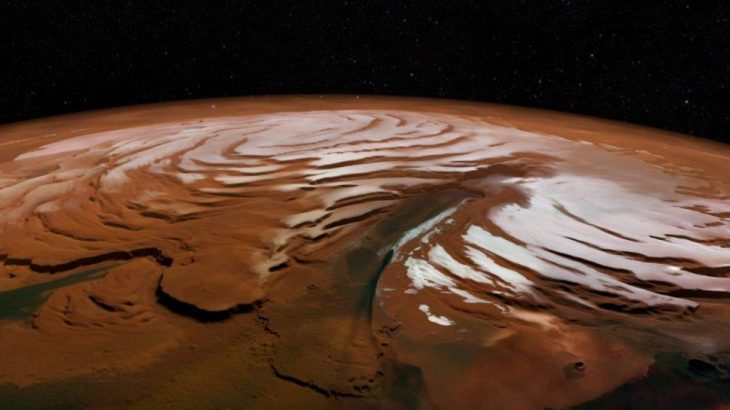 Surprising amount of frozen water found beneath the surface of Mars

Scientists have found a surprisingly large amount of frozen water buried beneath the sandy surface of Mars, according to two new studies published in the American Geophysical Union’s journal Geophysical Research Letters.

The ice sheets are sandwiched between layers of sand, similar to the layers of a cake, and these layers provide evidence that the ice caps on Mars declined and increased depending on the planet’s tilt.

There is enough frozen water buried beneath the surface that if the ice were to melt it would create a planet-wide layer of water five feet deep.

Not only does the data show rich deposits of ice comprised of 90 percent water in some areas, but the icy strata are also reliable indicators of past climate on Mars. Studying the layers could help researchers in their quest to determine if there was once life on the Red Planet.

“We didn’t expect to find this much water ice here,” said Stefano Nerozzi, the lead author of the new study. “That likely makes it the third largest water reservoir on Mars after the polar ice caps.”

Nerozzi’s findings were corroborated by a second independent study conducted by researchers from John Hopkins University who used gravity rather than radar to examine the composition of Mars.

It’s long been theorized that Mars was once home to robust ice caps that shrank as the planet tilted toward the sun, but until now evidence of these ice caps has been challenging to find.

It was even thought that Mars’ ice caps completely vanished, but the new studies show that ancient layers still linger, protected by sand.