Venus and Mars give scientists insight into the future of Earth • Earth.com 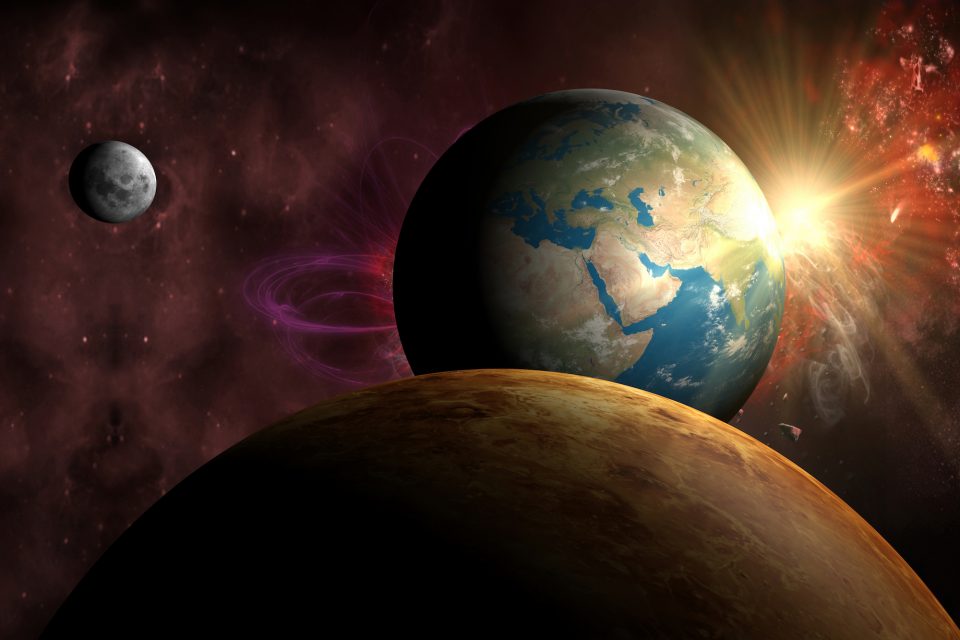 Venus and Mars give scientists insight into the future of Earth

A report from the European Space Agency (ESA) is describing how scientists can better understand the past and predict the future state of the Earth by studying the atmosphere and climate history of our two neighboring planets, Venus and Mars.

While all planets emerged from the same swirling cloud of gas and dust 4.6 billion years ago, they evolved to be vastly different. Venus has a thick, poisonous atmosphere, Mars has been stripped of most of its atmosphere, and the Earth has found a life-sustaining balance somewhere in between.

Earth is also the only planet known to have liquid water on its surface. However, missions such as the ESA’s Venus Express and Mars Express revealed that water once existed on those planets as well. Due to catastrophic climate changes that caused Venus to become too hot and Mars to become too cold, the planets did not maintain their water for long.

Often referred to as Earth’s evil twin, Venus has a dense atmosphere and a scorching surface temperature of 470 degrees Celsius. According to the ESA, the conditions on Venus provide “a natural laboratory to better understand a runaway greenhouse effect.”

“At some point, Venus began trapping too much heat. It was once thought to host oceans like Earth, but the added heat turned water into steam, and in turn, additional water vapor in the atmosphere trapped more and more heat until entire oceans completely evaporated. Venus Express even showed that water vapor is still escaping from Venus’ atmosphere and into space today.”

The Mars Express has been monitoring the planet for more than 15 years. The mission has produced abundant evidence that Mars once hosted flowing waters such as oceans and lakes, indicating that the planet may have once supported life. Mars also started out with a thicker atmosphere, but today the planet barely has any atmosphere left.

“It simply couldn’t hold on to its atmosphere most likely because of its smaller mass and lower gravity,” states the ESA report. “In addition, its initial higher temperature would have given more energy to gas molecules in the atmosphere, allowing them to escape more easily. And, having also lost its global magnetic field early in its history, the remaining atmosphere was subsequently exposed to the solar wind – a continuous flow of charged particles from the Sun – that, just as on Venus, continues to strip away the atmosphere even today.”

The ESA explains that Mars, like Earth, is known to be susceptible to changes in factors such as the tilt of its rotational axis as it orbits the Sun. Scientists believe that the planet is currently transitioning out of an ice age, and that the state of its water has varied over thousands to millions of years due to its tilt and distance from the Sun.

“Did we come close to becoming Mars-like in a previous ice age? How close are we to the runaway greenhouse effect that plagues Venus? Understanding the evolution of these planets and the role of their atmospheres is tremendously important for understanding climatic changes on our own planet as ultimately the same laws of physics govern all,” says the ESA. “The data returned from our orbiting spacecraft provide natural reminders that climate stability is not something to be taken for granted.”