Scientists identify two genes involved in the growth and greening of plants • Earth.com 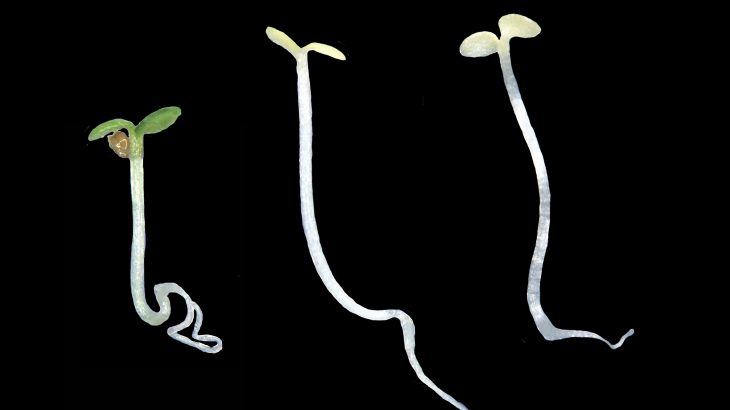 Researchers at the University of California, Riverside (UCR) created mutant plants to get a better understanding of plant cells, including how they coordinate growth and development. The study has uncovered a cellular communication pathway that has eluded experts for decades.

Specialized light-sensitive proteins in the retina enable humans to see. In plants, these proteins are called phytochromes and are mainly concentrated in the nucleus, which is the control center for cellular activity.

The photosynthesis process that fuels plant growth is initiated when light hits the phytochromes in the nucleus. A signal is then sent from the nucleus to a plastid, which informs the small organelle to transform itself into a chloroplast. This results in the production of the green pigment chlorophyll.

The lab of Meng Chen, an associate professor of Cell Biology at UCR, is one of the few laboratories in the world focused on phytochrome communications.

“The nucleus is like the federal government of the cell, while a sub-organ called the plastid functions more like the state,” said Professor Chen. “Until now, we did not know how the nucleus sent the ‘turn green’ command to the plastids, telling them to activate their photosynthesis genes.”

In the past, scientists have faced the challenge of determining which of the 25,000 nuclear genes is responsible for regulating the cell’s greening process. The UCR team theorized that the same genes involved in plant greening must be involved in other processes as well. “The regulator we were looking for would control both qualities, height and color,” explained Professor Chen.

The researchers chemically altered a small flowering plant so that it was unable to manufacture chloroplasts, even when exposed to light. The team discovered that some of the mutant plants were tall and albino, which were also qualities needed to test their theory.

By comparing the DNA of these mutants to the DNA of the unaltered wild plant, the experts were able to identify two genes responsible for regulating greening. “Plants without either of these genes fail to respond to light, becoming tall and albino seedlings,” said study first author and molecular biologist Chan Yul Yoo.

A better understanding of the mechanisms which control chloroplast development could lead to new technologies to improve crop yields and help plants cope with climate change.

In addition, the findings will be helpful for research focused on what facilitates the cell death associated with cancer. Professor Chen’s laboratory is funded by the National Institutes of Health because of such implications for cancer research.

“Uncovering the nucleus-chloroplast communication pathway in plants could yield new insights into gene expression in human cells and its misregulation in cancers,” said Professor Chen.